Comedian Bob Slayer finds a mate in the Australian Outback: Gary the Goat 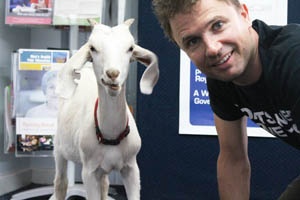 Bob Slayer’s mates in Australia: Gary the Goat and Jimbo

After references in my blog yesterday to sightings of British comedian Bob Slayer in Perth and to him going AWOL in Australia, he has re-surfaced in the Outback, 800 km from Adelaide.

Last night, I got this message from him:

I have finally managed to escape Perth, the city that did not agree with my digestive tract… I went to out-drink the town and it crushed me like a beetle.

I did two shows – they went “gang busters” (a local saying for ‘they went rather spiffing’) – then I went a bit mental in the hot sun with a few ales inside me – Did you know how strict the licensing laws are over here? Crazy. I really thought I could  steer this into an adventure but I just sailed the ship up a muddy creek of epic shit proportions.

I did have a bit of a Perth send-off, though: a hastily-arranged free gig to make up for the cancelled ones. Ten minutes before show-time I was sat in a bar with no microphone or stage and five locals, thinking Why did I set this up?

But, ten minutes later, people started arriving and they kept coming. Around 100 of them came to see me off – or to make sure I did in fact leave Perth. A great 90 minute show and $500 in the hat….

OK, maybe I will come back one day. But right now I am all about the Outback. The real life. Where men are hairy and made of leather.

At this point, I should mention Gary the Goat.

In my blog yesterday, Eric made an unexplained reference to Bob Slayer and a goat.

Comedian Jimbo Bazoobi bills himself as “Australia’s crudest comedian” and, allegedly, used to be “Sydney’s most popular children’s party clown throughout the 1990s”. Also, according to Jimbo, goats have often been part of his performances and, last year, he traded a case of beer for Gary the Goat. Now they are “friends for life”. They have performed at almost 200 rural towns across Australia and have released a CD called Goats Need Love Too!

The very thought of Bob Slayer travelling unsupervised with Jimbo and Gary the Goat is almost too much for my fantasy brain to cope with. It sounds like the basis for a particularly weird Tim Burton movie.

But it has now happened. Bob tells me:

I set off for the Outback with a man and his goat in an old beat-up $400 Ford something-or-other.

We decided to drive through the night. We have to make regular stops for Gary to piss and poo. Jimbo also grabs a bit of scrub bush at every opportunity so that Gary the Goat has something other than the car seat to chew on while he is sat in the back. He is a happy travelling companion who surprisingly does not smell. Well… not as bad as Jimbo. The pair have clearly bonded and Jimbo cannot stop telling me about how much his life has improved since he got a goat.

Shortly after sun-up, I take over driving the goat transporter. Within five minutes of getting behind the wheel, a giant rat jumps across the road in front of us. There is a Blam!! The car does a jump and Skippy is not going to bounce any more. There is an old Outback saying – You are not a real Aussie until you have killed your first roo – Well hello Australia; Bob Slayer is now one of you.

I want to dig a hole by the side of the road and bury him but Jimbo, although not insensitive to the welfare of animals – as he has displayed in his love for Gary the Goat – points out that we pass a road-kill kangaroo probably every couple of kilometers and we would need to do a lot of digging to respect them all.

At midday, with the temperature in the 40s, we pull into Coober Pedy, the opal mining centre of the world. Less than 2,000 people live here. That is half the capacity of the London Apollo. Half of these folks live underground cos it is so hot. The landscape of mines and caves has been used in Priscilla, Queen of The Desert, Mad Max, Pitch Black and a bunch of other films.

My first impression is: What a hot and dusty shithole!

We have no gig booked but, after an hour of walking around town with Gary the Goat, we have a gig set up for tomorrow evening in the Opal – a place to stay underground, beer and a good feed. This seems to be how they roll out here. If they like you then they take you in.

We had a sleep and then spent the evening putting up posters in the town’s four shops, two servos, two pubs and four-and-a-half restaurants. We meet the local cops, who are coming down for a knees-up tomorrow. We also meet a Czech opal miner called Vic who has been over here for 30 years. He has invited us for a kangaroo Bar-B-Q tomorrow. I did not ask if it was a bring-your-own. Jimbo suspects that the Czech opal miner might have a daughter he is trying to marry off.

Gary the Goat has just done a little bleat outside our cave. He is the most low-maintenance travelling partner you could ever imagine. So long as you give him a bit of old tree and a splash of water every now and then he is happy. He is sleeping on top of Jimbo’s car.

I fear we may hear no more of Bob Slayer and he will disappear from the known world, living in a menage-a-quatre in a cave with Jimbo, a Czech opal miner’s daughter and Gary the Goat.

My sympathy is with the goat.