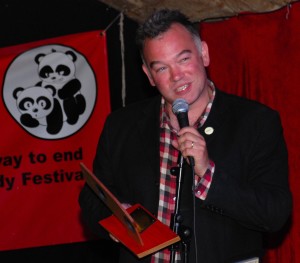 Yesterday, I had a meal with comedy scriptwriter Mark Kelly in Soho. He sniffled. I coughed. We both had colds.

Last week, I saw an invitation-only try-out of Mark’s hour-long show Stuart Leigh – The Stewart Lee Tribute Act, which he is in the process of writing.

He first tried it out in Claire Dowie’s Living Room Theatre then, a few days later, at Ivor Dembina’s Hampstead Comedy Club – the performance I saw.

“What you saw last week,” Mark told me yesterday, “was a rough version of one of several series of texts. I’ve got nearly four hours to choose from. It was maybe 30% different from the first performance at Claire Dowie’s – and I performed it differently.”

A man attempts to make a purchase.

What could go wrong?

The monologue is delivered by a character who thinks of himself as The World’s No 1 Stewart Lee Tribute Act and who interacts with the man behind the counter, through the glass, at the garage.

“How did you describe the show to Stewart Lee?” I asked Mark.

“I haven’t particularly,” he replied. “I invited him to the gigs and he said he was worried, if he came, that people might be looking at him to see his reaction rather than looking at the piece. And he did not want to be seen as, in any way, approving or colluding because it would look wrong for both of us – he would look smug and it would undermine the idea of me as an outsider. I offered to send him a script – either a rough script or the finished script. He decided not to read it because, if there was anything in it he didn’t like or which would upset him, he would rather not know.”

The next try-out (possibly in July) may open with Vivienne Soan playing avant-garde saxophone in the style of Evan Parker, whom Stewart Lee likes: “There’s room in my piece to have a busker in the garage forecourt,” says Mark.

“My intention is to move it into a much more performance art type of thing. I’m probably going to make it a bit more poetic, with internal rhyming. Obviously, comics have scripts, but it’s disguised text; it’s written to be spoken as conversational monologue. I am going to make no attempt at all to disguise the fact my script is textual; I would highlight the fact it is.

“The next stage will probably involve an environmental soundtrack of late-night garage sounds treated to make them sound a bit dreamy and trippy – not intrusive, but they’d be there – probably some live music, a lot of visuals and the text broken up and done in a quite substantially different way. And the stage set will probably be projected – it’s a photograph of me at a garage in a hoodie with my back to the camera walking into a circle of light.

“I’m playing with the idea of having a disguised series of foot pedals linked to the microphone with different effects on and I can press the pedals. But I have to decide how funny I want it to be because I don’t think anyone’s ever performed treated voice comedy. And there’s a good reason for that. If you concentrate on jokes, you want the voice to be clear and audible. So the idea of doing jokes with echo and reverb is a bit alien.”

Reaction to the two try-outs has been varied, Mark tells me.

“My old double-act partner Paul Brightwell loathes it. We used to perform as Cheap and Nasty – I was Mr Nasty.

“I’m quite happy that some people hate it, as long as some people really like it. Those people who said it was really boring said so in terms that implied they were really infuriated by it, which is quite good.

“Other people have actually got it, though one person who saw the show actually asked me: Why do you hate Stewart Lee? – I said: No! No! He’s a friend!

“When you perform, obviously, people assume the character speaks for you, which is not the case at all. My piece doesn’t have to be about Stewart Lee. It could be about a tribute act for a fictional act. It’s about identity, about someone who is alienated struggling to find some sense of identity and a way in the world. But it’s also about what, to me, is the nightmare of post-modernism, which I think we’ve already entered. It is very difficult to find an argument that galvanises any more, because everything is immediately presented with its opposite or is presented with a counter argument. It’s very, very difficult to find arguments out of any situation and everything repeats so, in a way, Stewart Lee is the comic de nos jours. Stewart Lee’s act is very, very useful.

“It seems to me it’s also about the solipsism of digital culture. I refer to the Chortle comedy website. The important bit about the Chortle reference is the line …and, through the medium of ill-informed comedy criticism, I have managed to gather together a network of like-minded individuals in low-paid jobs at all-night garages the length and breadth of Britain.

“That, to me, is the important image, because it is just true. Everywhere around Britain, there are these people on low-paid jobs, really bored out of their minds in all-night garages. The all-night garage is the symbol of a certain type of labour, a certain type of situation. To me, it just spells alienation in all sorts of ways. You are stuck behind this glass, often in a very small space, and the only people you talk to are very often stoned or drunk.”

“Watching your play,” I told Mark. “was very odd. I somehow lost all my critical faculties. I was listening to the writing and watching the delivery, which so mesmerised me I ended up having no opinion on what I was actually watching except that it was very densely and well written.”

“Well,” said Mark, “I know what I want the effect on the audience to be. I want it to be quite hypnotic and dreamlike and for the audience to enter a sort-of trance-like state. That again is why using Stewart Lee’s act is quite good, because he does all that repetition stuff anyway… So feeling ‘mesmerised’ is good.

“One thing I accidentally missed out when I performed it last week – and it really needs to be in – is that, at one point, the character says to the guy in the garage who is going to be his manager, So you see what I’m offering is an overview of Stewart Lee’s style done in the style of Stewart Lee and then there’s talk about the existentialism involved in it. Then he says: I’m not suffering from an identity crisis, I’m suffering from a lack of bookings.

“That’s kind of the heart of it.

“The idea for that line was lifted from a TV programme about a guy who has that collecting mania where you can’t throw anything out and he’s taken it to the most amazing extent imaginable. He inherited quite a large house and every single room is piled up to the lintels. He was actually having to crawl on top to get in. They brought in this psychiatrist to help him and you could see this psychiatrist gradually having to admit defeat. It was utterly dysfunctional. And eventually the guy tells the psychiatrist: My problem is not psychological. my problem is a lack of storage space.

“To me that was a moment of comedy and tragedy simultaneously. That’s one of the things that’s going on in my piece.”