“How to Produce, Perform and Write an Edinburgh Fringe Comedy Show” 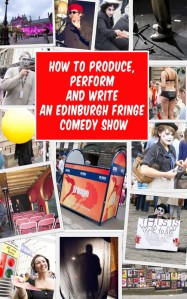 How many editions do books come in?

I must have coughed myself awake last night, because I remember I had a dream… I only remember my dreams if I wake up during one.

Yesterday evening, I had a meal at an Italian restaurant owned by Iranians in Esher with Fred Finn, the Guinness record-holder as the world’s most travelled person. He told me that his author father was called Fred Finn too and he came from a line of 17 Fred Finns. He also told me the President of Turkmenistan recently visited the Ukraine.  I went to Turkmenistan in 1995. An interesting place.

I am obsessed with places like Turkmenistan. Comedians are currently starting their annual obsession with the Edinburgh Fringe, because the ‘cheap’ entry deadline for the festival is in two days time.

Ian Fox is more than just a comedian – he is a comedian, author, blogger, professional photographer and even, last year, a successful last-minute, thrown-in-at-the-deep-end sound supervisor for the Malcolm Hardee Awards at the Fringe.

Ian has produced and performed in fourteen Fringe shows over the last nine years –  which is why he can justifiably title his book How to Produce, Perform and Write an Edinburgh Fringe Comedy Show. In our new, more complicated publishing world, it comes as a paperback, in a Kindle edition and as an eBook.

So, I asked him yesterday afternoon, why a book in any form? And why by him?

“In addition to my own shows,” Ian told me, “I always make a point of asking how others people’s show are going and I end up learning stuff from others. The book wasn’t my idea – a couple of people suggested that I should write it. I usually get comics asking me Fringe questions in gigs the rest of the year. Writing it down – all my advice and what I’ve learned myself – seemed like a good idea.”

The things which he himself surprisingly first learnt by going up to the Fringe were “from a business point of view VAT and the surprise of discovering you have to pay it on your ticket money. And, from a personal viewpoint, how different people react to the stress and pressure of doing a show each day for almost four weeks. I’ve seen some super egos appearing from people who’ve started to believe their own press.”

But, I asked him, isn’t the Fringe so full of competition and rip-off venues, so chaotic and such a bottomless money pit that it’s not worth performing there at all?

“Competition is not really a problem,” was his surprising answer, “Rip-off venues are an issue but incompetence is usually a much bigger issue, both in the people managing the venue and the temporary staff doing the day-to-day running of the place. But I personally think things of beauty arise from chaos.”

The alternative, I suggested, is losing less money doing a show as part of the PBH Free Fringe or the Laughing Horse Free Festival.

“Well, some of the free shows are surprisingly lucrative,” Ian says, “and, if you’re sensible with the money you put up-front  then I think you can turn a profit. I reckon there’s advice in my book to save a new performer at least £300.”

But why should people need to buy a book? Isn’t it obvious what to do even if you are going to the Fringe for the first time?

“Some of it is,” says Ian, “But some of it you only learn by doing it. In March, you’re usually too exited or confused by the small print to know what it all means. In October, when you get your final figures, you discover what it all means and wish you’d had a better understanding of how it worked before you invested your money. Plus the official stuff from the Fringe Office, is – How can I explain this? – ‘official’. There is more of a street-wise approach to my way of doing things.”

Also recently published was Mark Fisher’s book The Edinburgh Fringe Survival Guide: How to Make Your Show A Success (which I blogged about here).

How are the two books different?

“Mark’s a theatre critic, I’m a comedian,” Ian explains. “We both have different experiences of the Fringe. His version probably doesn’t include his flatmates going mental and committing assault with a deadly weapon or fist fights with drama students. My book has my own stories in it, aside from one or two anecdotes I included just because they were funny – so it’s unique to me. It’s got a behind-the-scenes element to it that the people who aren’t performers enjoy reading as well.”

Comedian Ashley Frieze is credited as co-author of Ian’s book.

“He edited it,” explains Ian, “and he was a good sounding board for ideas. Plus he added a couple of sections here and there and reminded me of stuff I’d forgotten. The thing he did most was leave comments in the margins saying: Yeah, you probably should NOT mention that! in the true story sections of the book. I’m at that point now where I’ve pretty much got to work with someone or I just don’t do anything other than watch old films I’ve seen loads of time before.”

Ian’s own show at the Edinburgh Fringe this August is going to be “about photos and stories. Similar to last time… in fact, if I don’t get some writing done soon, it might be really similar to last year’s show.”

And is there another Ian Fox book on the horizon?

5 responses to ““How to Produce, Perform and Write an Edinburgh Fringe Comedy Show””