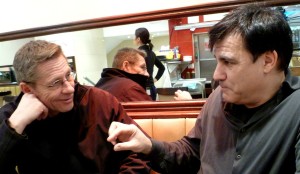 Two days ago, comedian Lewis Schaffer asked me to be on his weekly radio show next Monday and wrote in his blog that my own philosophy of blogging and performing was that “garbage set free is better than genius hoarded”. I have never said that, but I guess I do think it, so maybe I will claim it was my phrase not his.

Yesterday, I went with comedian Martin Soan to see Lewis Schaffer’s twice-weekly show Free Until Famous in London’s glittering West End – well, OK, it is in a basement in the rather dingy corner of Soho near Piccadilly Circus.

After Lewis Schaffer’s show, the three of us ended up in an ice cream parlour in Old Compton Street.

“Why do you want me on your show next Monday?” I asked Lewis Schaffer.

“I felt guilty about how bad the two shows you were in before were.”

“He’s Jewish,” I explained. “What was wrong with my two appearances on your fine radio show?”

“When we first started to do it,” Lewis Schaffer explained, “I didn’t know what the radio show was about… Now I know it’s about me and Nunhead, where I live. It’s about the life of a very small, previously-ignored inner city suburb and all the funny things that go on in this tiny little place that people who are not from Nunhead enjoy hearing about, because it’s got a funny name and no-one’s ever heard of it. So what’s interesting is Nunhead stuff. You’re not from Nunhead, John.

“In some cases I will have people on who are famous – because they’re famous – you’re not famous, John – or people who can help my career. I’ve known you for years, John, and I’ve now realised you can’t help me. But I keep forgetting that. When I…”

Martin interrupted: “But John has got something to do with Nunhead now. He’s always coming down to my monthly comedy club Pull The Other One. And that’s in Nunhead.”

“And I’ve always supported you too” said Lewis Schaffer. “I’m always mentioning Pull The Other One on my radio show, though you probably haven’t sold a single ticket because it’s radio. I don’t know how many listeners we have: we could have anything from 10 to 30,000 listeners… and that’s literary ten.”

“Has he asked you to be on his show?” I asked Martin.

“Yes you did,” Martin corrected him. “I Facebooked you… You asked me to come naked but then you bumped me from the show.”

“I didn’t know that! I apologise… I thought… I dunno… I thought…” said Lewis Schaffer. “But I like the idea of you coming to the studio naked.”

“Do the radio rules allow you to be naked?” I asked. “Perhaps you should have a balloon to hide your modesty?”

Lewis Schaffer and Martin looked at me. There was a long silence. Eventually, Martin said: “That’s a good idea, John.”

“So,” I suggested to Lewis Schaffer, “next Monday, why don’t you un-invite me – I have nothing to do with Nunhead – and invite Martin on naked.”

“Naked would be better radio,” enthused Lewis. “You come into the studio totally naked… and then, during the show, I’ll get naked too.”

“Have you still got your female co-presenter?” I asked.

“Do you maybe think you should ask her about this?” I asked.

“No,” replied Lewis Schaffer, “What’s the problem? I think it will make good radio… So what are we promoting? We’re promoting your next Pull The Other One show?”

“I’m not promoting anything,” Martin said.

“You have to promote something,” said Lewis Schaffer. “It’s a chat show.”

“Well… Ah!…” Martin suddenly enthused, “I could talk about what I’m doing in Nunhead.”

Lewis Schaffer looked at him.

Lewis Schaffer reconsidered: “I like the idea of you working with old age pensioners in Nunhead – probably a lot of the original residents of Nunhead – and now the dirty immigrants have moved in, like the Americans. I like that idea.”

“You could say,” suggested Martin, “And now, for Florence, who’s listening out there, here’s Martin who fitted your toilet seat last Thursday. He’s sitting here naked.”

“And can we get into an argument and talk about America?” Lewis Schaffer asked enthusiastically.

“We can,” replied Martin.

“And you can talk a lot about toilet seats,” I suggested.

There was a long silence.

“Martin – you naked will be good radio,” mused Lewis Schaffer. “John would not be good radio. He’s run out of ideas.”

“What John’s really good at,” said Martin, attempting to be constructive, “is reminding you of the ideas you had but had forgotten about.”

“But how does he make a living doing that?” asked Lewis Schaffer. “People like us, people like Lewis Schaffer, we are busy people. We’ve got gigs and promotion to do; we don’t have time for a blog. Then John comes and sucks the life out of us, which makes it even harder for us to do a blog because he comes and takes all the ideas that we were going to use in our blog and puts it into his. I wrote in my blog the other day that John’s philosophy of blogging and performing is that Garbage set free is better than genius hoarded. I made that up. But I bet John will claim he really did say it.”

“No I won’t,” I told Lewis Schaffer. “And I don’t need to steal your ideas. I am not going to blog about this evening.”