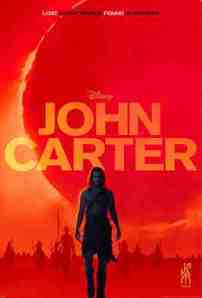 What’s in a title? Well, in the case of Disney, maybe a $200 million loss on their movie John Carter after they inexplicably dropped the second part of the original title John Carter of Mars.

One theory about why the movie has been such an utter box office disaster is that no-one knew who the character was nor where or why he was fighting aliens. According to some reports, people coming out of screenings did not even know the film had been set on Mars. Oh! – and, in Hollywood’s post mortem, it was felt potential women punters had no idea there is a central romance in the movie. And the little ladies only love a war movie if it has romance, says Hollywood (e.g. Gone With The Wind).

Writer Edgar Rice Burroughs created the John Carter character before he created Tarzan but today, while everyone has heard of Tarzan, culturally no-one knows John Carter. This is a fact which seemed to bypass the Disney publicity team, who sold the movie heavily on the name.

Titles are, of course, not unimportant.

Star Wars was originally going to be called The Adventures of Luke Skykiller (sic). When producer Gary Kurtz and director George Lucas decided to re-title it The Star Wars, 20th Century Fox researched reaction to the title in shopping malls and came back saying: “Women will not go see a movie with the word ‘War’ in the title.”

The studio, according to Kurtz, always disliked the title (until it made mega-millions) but could not come up with a better one.

Edgar Rice Burroughs’ series of books on John Carter of Mars influenced many sci-fi movies from Star Wars to Avatar and many books and movies in-between and before, which also ironically means the new Disney movie feels slightly derivative. John Carter may have been the original, but, by now, audiences have  seen most of it before in other films.

Disney’s strange removal of all reference to Mars in the title John Carter may be because the studio took a bloody nose Mars Needs Moms last year. The movie’s budget was a reported $150 million + marketing costs; its worldwide box office gross was $39 million. The old rule-of-thumb (not altogether true today on mega-budget movies which require additional mega marketing budgets) was that, to break even, you had to gross 2.5 times your negative cost. So, roughly speaking, a $50 million movie had to gross $125 million to break even.

Mars has been doing badly of late. Columbia Pictures are currently re-making the 1990 movie Total Recall with Colin Farrell in the Arnold Schwarzenegger role and someone working on the special effects tells me it is not set on Mars. And let us not mention the normally superb Brian De Palma’s 2000 aberration Mission To Mars (budget $100 million; box office gross $110 million) nor Tim Burton’s 1996 Mars Attacks! (budget $80 million + marketing $20 million; box office gross $101 million)

It might be cheaper to go to Mars itself. In a BBC Radio 4 documentary last Tuesday, rocket entrepreneur and SpaceX CEO Elon Musk claimed he could send people to Mars for $500,000 per person.

Me? I prefer Edinburgh and I am here this weekend for a two-day event organised by the Guardian newspaper in which both Gary Kurtz, producer of Star Wars and The Empire Strikes Back, and 20th Century Fox’s former vice president Sandy Lieberson explain how the original Star Wars movie was made.

According to Gary Kurtz, one of the inspirations for Star Wars was – yes – Edgar Rice Burroughs’ series of books about John Carter of Mars.

Getting down to figures, the Disney movie of John Carter, based on Burroughs’ first (1912) John Carter book A Princess of Mars, cost $250 million to make and $100 million to market… and last week Disney announced they reckoned they would make a $200 loss on it.

“None of it worked on any level,” Sandy Lieberson said yesterday afternoon in Edinburgh. “Not on the marketing, the production, the casting, the chemistry. So it’s a perfect example of talented people, lots of money, the sky’s the limit and you come up with a dud.”

Before the original Star Wars was made, Gary Kurtz had tried to buy rights to the John Carter of Mars books as well as rights to Flash Gordon and to Akira Kurosawa’s movie The Hidden Fortress, but negotiations failed. So George Lucas made up his own story which, originally, was about a courier taking mysterious substances from one place to another.

Until a late stage in the scripting, robots C3PO and R2D2 were bickering bureaucrats, as in The Hidden Fortress.

George Lucas and Gary Kurtz had wanted to cast Hidden Fortress star Toshiro Mifune in the Star Wars role of Han Solo (eventually played by Harrison Ford), but Mifune’s English was not good enough. For the briefest of moments, according to Kurtz, Lucas suggested: “Why don’t we make it in Japanese with sub-titles?”

According to Kurtz, Lucas would snip tiny little bits of his own hair off when he had trouble writing. If Kurtz’s secretary arrived in the morning to type-up what Lucas had written (in long-hand on yellow paper) and found lots of little bits of hair lying around, she would say, “Boy! That must have been a bad night!”

Gary Kurtz agrees with the oft-quoted (by me) famous movie-making maxim of William Goldman in Adventures in The Screen Trade that “Nobody knows anything”.

“You never know in advance,” Gary Kurtz said yesterday afternoon. “This is one of the troubles. I don’t envy studio executives at all. I never wanted to be one I was offered a couple of times to be a part of the production team at a studio, but I couldn’t see it, because it is very difficult to predict about projects.”

The example he gave was director Robert Wise and Julie Andrews. “They put together The Sound of Music,” said Kurtz. “It was a famous musical on the stage but it worked brilliantly as a film. The very next project they wanted to do together was another musical that was really well-received on the stage – Star!

“And it didn’t work at all. Yes, the music was different. But on the stage it had worked. Why didn’t it work as a film? It’s one of those things that’s impossible to analyse. It’s almost like a chemistry experiment. You put in all the ingredients, you mix it all up and you stand up and put the burner under it and see what happens. Sometimes it turns into the most beautiful liquid possible. Other times, it just blows up in your face and you don’t know why.”

To hell with philosophising about movie-making, though. Were there any ‘romances’ among the crew and cast during the making of Star Wars?

“No,” according to Gary Kurtz. “Everyone was too tired. On the second film, The Empire Strikes Back, yes. But on the first film, no.”