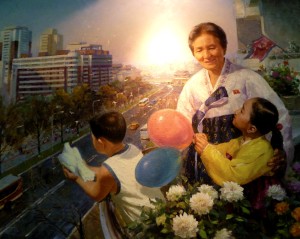 But our young female North Korean guide had to sleep on a couch on a first floor landing, because no rooms were free. She has had a painful back for the last couple of days, ever since our coach hit a gigantic pothole in the road and everyone was lifted off their seats. She was standing and fell awkwardly, her back hitting the hard edge of a seat.

Yesterday, our older, more experienced male guide, told us of the devastating American Imperialist bombs which rained down on Pyongyang during the Korean War.

“I think you will understand a little,” he said. “My teacher of English told me there was a little bombing of London during World War Two. I did not know of that before he told me.”

Today, our younger, less experienced guide, a year out of college, asked: “In England, what is the main food? Boiled rice?”

The outside world is not just a foreign place to North Koreans, it is a planet in an unknown galaxy far, far away

This morning, we took the long drive along bouncy potholed roads to the International Friendship Exhibition at Myohyang-san.

I was there in 1986, on my previous trip to North Korea. It is clearly a bunker with a giant building on top of it, containing all the gifts showered on the late Great Leader Kim Il-sung by other world leaders who were/are all, of course, in awe of his charismatic omniscience.

Again, driving through mile after tens of miles of apparently desolate countryside, North Korea seems like a land floundering without direction. What is arguably the most controlled country in the world is floundering.

The Friendship Exhibition seems even more guarded than last time I was here. Armed guards on the building, One-man military outlook posts in the hills surrounding it. Armed guards blocking entry to nearby side-roads. And what appears to be the roof of another underground structure.

Some of the gifts – rather good gifts, in fact – were from Colonel Gaddafi of Libya. When someone in our group mentioned that Colonel Gaddafi was dead, overthrown and killed in a revolution six months ago, and there had been revolts in Tunisia, Egypt and currently Syria, our younger guide’s mouth almost visibly dropped open. She knew nothing about it and – clearly – did not want to know anything about it.

One of the gifts we saw was a vase given to the Great Leader, she told us, by the people of Cyprus. “It is a million years old,” she told us.

Whether this was a mistranslation, a misunderstanding or simply because the North Koreans make up impressive facts on the basis that anything which is said becomes true… there is no way of knowing.

There is a new, second building, containing gifts given to the Dear Leader Kim Jong-il. One of the rooms contained gifts given by shocked, stunned and saddened world leaders on the death of Kim Jong-il.

We were told to smarten ourselves up before were taken into that room. There was a large statue of Kim Il-sung (not Kim Jong-il) in front of a brightly-coloured rural tableau. We were all lined-up and bowed to the waxwork, then were taken out without being shown the gifts.

Our two guides had preceded us into the room and had bowed deeply to the giant waxwork, like two people going into a Roman Catholic church and bowing to a crucifix of Jesus.

We were taken to a mountain cafe to have a pre-packed picnic by a river. A few locals were having picnics here too. A little away along the riverbank, a girl was sweeping the rocks and the earthen paths with a Wicked Witch type broom so they looked clean.

Then we were taken to a Buddhist temple.

Our older guide told me a few days ago that there are 20,000 Buddhists in the country and 20,000 Catholic Christians. The two figures seem a bit neatly similar.

Today, our younger guide told us: “The Party allows us to believe in religion.”

We are taken to the Buddhist temple which, we are told, was destroyed by the Japanese in the Great Patriotic War and later destroyed by the Americans in the Korean War, but which the Party had faithfully re-built twice. The one monk on display seemed a little sad-eyed and the temple’s official guide seemed a little more over-zealous than most on unsubtly pushing the Party line.

Walking on the wooden floor, I hear a gigantic sharp crack behind me. I turn round. One of our group has his ankle stuck in a gaping hole. One of the floorboards has cracked and collapsed under him.

On local television (which I watch in the hotel) there is, of course, no foreign news. It is like living in the self-contained bubble of a medieval village with no transport and little outside news. It is, in fact, like living in The Village in the 1960s TV show The Prisoner. Everything is happy and good and free and clean and smiling and caring within the village.

In North Korea, as far as I can see, there is no Orwellian Doublethink in ordinary people, because Doublethink means that you know the truth but you choose to believe or discipline yourself to believe the untruth.

In North Korea, really, we are talking about Igno-Think. They know only what they are told. What they have been told since they were born. Nothing exists outside the North Korean bubble. Life continues, self-contained. Only the country exists. In these circumstances, it is entirely reasonable to believe that, in England, the main food must be boiled rice.

If someone in the UK were to read no newspapers, hear no radio, see no television except the Party channel and everyone they met lived in the same way…. Imagine that… Imagine that all they knew, all they had ever known, was what the parish council told them had happened and was happening… then that would be some hint of what life is like in North Korea.

From that viewpoint, the Great Leader Kim Il-sung, the Dear Leader Kin Jong-il (and now the Supreme Leader Kim Jong-un) have led and inspired the country into great social and technological leaps the like of which other countries can only dream of. It has made North Korea an icon for the forward-thinking peoples of the world and a beacon of hope for the down-trodden masses living under the yoke of elitist capitalism. North Korea is a centrally-important country in a world where other leaders and Juche study groups pay homage and give grateful presents to North Korea’s great leaders in awe-filled tribute.

Tonight, my tooth, damaged in Beijing, is giving me very slight pain.

I take some oil of cloves.

I wonder if our younger guide has a bed tonight and how her back is.