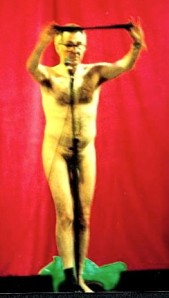 Malcolm at Glastonbury in 2003

So I was talking to Jacki Cook who runs the Emporium vintage clothes boutique in Greenwich and she was telling me about her friend, the late ‘godfather of British comedy’ Malcolm Hardee.

One of several prisons Malcolm was jailed in during the 1970s was Ford Open Prison in West Sussex.

“So he took all the floorboards up in his house to find where Pip, his partner, had hidden his car keys, because he knew they would be under the floor somewhere.”

“Why had she hidden to car keys?” I asked her.

“Who was he visiting at Ford?” I asked.

“Nobody. He was going to do a show somewhere near there, so he said to me: We’ll go via Ford and chuck some cigarettes and whisky and everything over the fence to them inside.

“Another time, he actually did a comedy show inside Ford Prison. You’re not allowed to go back into a prison after you’ve served time there, but he managed to get back in. You’re not even allowed to go visit people in there. But he so wanted to go back in, he managed to arrange to do a show there – I don’t know how he did it. He wanted to do it so much. He said he just had to go back in so he could go on stage and start his act with the words: Oy Oy – Another captive audience…

“And he also wanted to stand on stage and say… It’s so hot in here, even the governor is melting… because the poor man had had plastic surgery on his face and Malcolm said his face looked like it was melting.

“I think Malcolm once told me,” I said, “that you could squeeze 3,000 people in that tent. But he might have been drunk.”

“Big tent,” said Jacki. Thousands of people. You’ve gotta be on the stage! I told him.

“Eventually, he fell out of the tent. He was in bad shape. Fully clothed. Still in the sailor suit he’d had on all week. He stands up and looks at the big comedy tent and does a tiny little Oh… then goes Oooh, oooohh, oh, ooohhh...! and he’s walking wobbly, going Oooh, oooohhh… staggering along. I thought he was going to the lavatory to put a bit of water on his face. But No.

“Moan moan, he says and he staggers up onto the stage.

“They were roaring with laughter at him. But he wasn’t putting it on; it was for real.

“And he didn’t say anything. Nothing but Oh, oh, ooohhh, oh…

“And there was another Glastonbury we heard about from our friend Young Jon. He said it was about 4 o’clock in the morning when everybody is wandering around. It had been pouring with rain and all the people wandering around are off their heads. And he said, out of all those thousands of people coming towards him, he saw Malcolm.

“All Malcolm had on were his underpants and his spectacles. He had fallen in the mud and the whole of one side of his body was black from the mud, but the other side was all clean – even his spectacles.

“Black mud one half; white skin the other half; 4 o’clock in the morning in his underpants.

“At another Glastonbury, I remember he was peeing on that bridge where you weren’t allowed to pee and he was on top of the bridge peeing so everybody could see him and people were going underneath and he was saluting them.

“And do you remember that night he was carried out of his club on a stretcher? He’d taken all those drugs and he couldn’t speak.”

“Somebody,” Jacki continued, “had given him ecstasy and coke and everything – and Viagra.

This year’s Malcolm Hardee Comedy Awards Show will be compered by Miss Behave and is being staged as part of the Laughing Horse Free Festival at the Edinburgh Fringe on the evening of Friday 24th August.