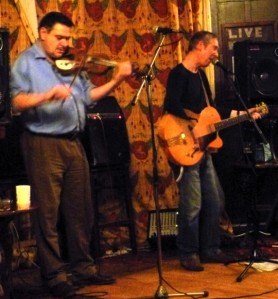 In December 2010 I blogged about the wonderful Paul Astles and Bobby Valentino, both world-class performers. They should be living in mansions in Surrey in unhappy marriages and down to their last million like other rockers of a certain age.

I went and saw Paul and Bobby perform again last night, at their monthly Brockley gig in South East London. 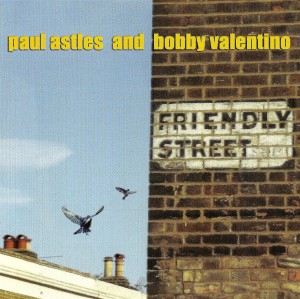 “Friendly Street” – not available for download nor in shops

They’re still brilliant. As is their new-ish album Friendly Street.

“When did you record it?” I asked Paul after the show last night, while Bobby was getting me a copy from the boot of his car.

“We did it in the summer of last year,” said Paul. “I can’t remember when.”

“Charlie Hart’s. He used to play with Ronnie Lane and Ian Dury. He’s Bobby’s next-door neighbour and our old friend and he’s got a studio. He’s playing around London with Slim Chance now.”

“Why’s your album not on iTunes?” I asked Paul.

“Just because I’m not together enough to do all the PayPal and bank accounting and all that kind of stuff you have to do.”

“Only if they see us. It’s a rare and precious thing.”

“You could be selling around the world on iTunes,” I said. “Not just in the UK.”

“Well,” replied Paul. “A man contacted me on my Facebook account from New York and asked me if I would send a copy of Friendly Street to him, so I did and he sent me a cheque for whatever £10-and-postage is in dollars. He was a very nice man.”

“You should put the album – and the individual tracks – on iTunes,” I told Paul. “You might find you have fans in Texas or you might become a big hit in the Ukraine. As far as I know, Right Said Fred are still mega-stars in Germany – they were a couple of years ago – and they make a very good living. Here in true UK, Right Said Fred are yesterday’s one-hit wonders; in Germany, as I understand it, they’re still selling shedloads.”

“Well, there you are,” I replied. “You can overcome any set-back. You have to be on iTunes. If you put your album on iTunes, the two of you might become a hit around the world.”

Even if they only became a cult hit in China or India, they could be living in mansions in Surrey in unhappy marriages and down to their last million.

Everyone should have aspirations.

And there’s still time. It just needs luck and distribution.