The Edinburgh Fringe: publicising comedy shows with nudity in the street 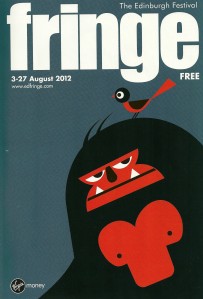 After my blog yesterday about the Edinburgh Fringe’s sudden censorship of show titles, English grammar and risqué images this year, pink-suited Fringe veteran (how he will love that description) Mervyn Stutter pointed out to me: “Ooh that Pr*gr*mme cover, J*hn! It looks like two red b*ll*cks and a sawn off c*ck……..NURSE!!

Mervyn, whose Pick of The Fringe show celebrates its 21st birthday this year, also suggested that, if you list a show in the Fringe Programme as being Theatre not Comedy, you are more likely to get less censorious scrutiny:

“Molly Wobbly’s Tit Factory,” Mervyn pointed out, “sailed through without comment! What a load of nonsense. But then this Tit show is a proper musical from Dublin and is therefore Art. See the difference?………No, nor me.”

Australian performer John Robertson told me: “Mervyn may be right. I was allowed to call a show about sleeping with Queen Elizabeth The Old Whore. The Fringe Programme features a picture of her face PhotoShopped to appear goofy and hideous. Thank goodness ‘whore’ isn’t classified as slang, eh?”

With the Programme now published, performers’ thoughts are turning to how best to promote their shows in August. Martin Soan told me yesterday:

“We’re trying to approach all the people who’ve ever performed with the Greatest Show on Legs – and there are a lot of them – to see if they’re around in Edinburgh this year and fancy performing sketches with us.”

“Well,” explained Martin. “At the time, he was a self-seeking publicist. He’s gone on to do great stuff and he’s very talented and I wouldn’t take any of that away from him. But we used to do The Tube regularly and we were proud of our work on it. Vic Reeves was supposed to be a heckler from the audience who was supposed to say one thing, but he crow-barred his way in and went on for about five minutes. It destroyed a rather good sketch.”

“And,” I prompted, “Keith Chegwin did the naked balloon dance on an Amnesty gig, didn’t he?”

“He let his balloon slip,” said Martin, “and showed his bollocks halfway through the balloon dance, which is not the way it’s done. He rather mis-interpreted the ‘artistic’ side… The idea is to go through a rather drunken side-stepping routine to some cheesy music, hiding one’s bollocks all the way through to the end and then let the balloons go, show your bollocks and then just walk around and chat. I think he didn’t like me much, because I was drunk.”

“And I saw Simon Munnery do the naked balloon dance at Glastonbury,” I said.

“That was one of the times I didn’t turn up at Glastonbury,” Martin replied.

“So why did all these people perform with The Greatest Show on Legs?” I asked.

“I guess because they knew they could do whatever they wanted.” Martin suggested. “When we were in Oswestry, Paul Merton appeared as a pyjama-clad comic.”

“Holly Burn,” said Martin. “She was the first woman to appear as part of the Greatest Show on Legs.”

“But not doing the balloon dance,” I said. “A woman couldn’t do it. It would sexualise it and they’d have to wrangle three balloons.”

“You told me you were thinking of not doing the naked balloon dance in the Edinburgh Fringe show this year,” I said. “You have to finish the show with it, surely?”

“Or start the show with it,” said Martin. “Get it out of the way. If people want us to do it, then of course we will. In fact, we may do the balloon dance outside of the show – in the street. Let’s get into real trouble. We will do a naked balloon dance in the street with an old-fashioned portable ‘Brixton briefcase’ cassette player – to get the punters into the venue… and then, when the audience are in the Hive, we’ll get them to take their clothes off and then we’ll perform completely clothed in front of a naked audience. I think that’s a very good idea, don’t you? No-one can get in and see us unless they’re completely naked.”

“You think the police may object in the street?” I asked. “Have you had any problems with the police in the past?”

“Because the venue wouldn’t allow us to put a firework up his arse inside,” replied Martin.

“Which venue was this?” I asked.

“I can’t remember,” said Martin. “It was in a pub basement near the big roundabout.”

“Why can’t you remember?” I asked.

“God, John!” said Martin. “Over the years? They just all… I tell you who was on with us. The Brighton Bottle Orchestra…”

“They were on the show before us,” Martin explained. “And they were very very funny.”

“Indeed they were,” I agreed.

“Very funny,” said Martin. “It was a pub near the big roundabout. There’s probably something else there now. The Fringe changes.”