The Burper King and Mr Methane preparing at Westminster

They were appearing on a Japanese TV show called Sekai no Hate Made Itteq! (Let’s Go to the Ends of the World!) hosted by Japanese comedian Ayako Imoto.

The Japanese were back again for more last month and, at the weekend, they transmitted their piece on Japanese TV (there was an embargo on what was in it until today). Last week, Mr Methane and Paul Hunn told me what happened during the filming. They met at about 10.30 one sunny morning near Westminster Bridge in London…

“Basically,” Paul told me, “we had the chance to ad lib a few. There were lots of people around so there were various looks of disgust and horror apart from the Japanese tourists, who instantly recognised Imoto and seemed very impressed.” 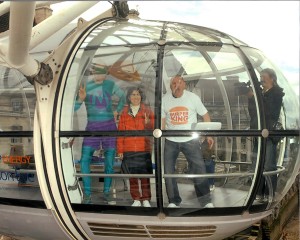 Filming for Japanese TV in a gondola on the London Eye

“Then, obviously,” said Mr Methane, “we did lots of farting and carrying on up in a gondola of the London Eye and then we did a scene where we’re farting and belching in the car going between the different attractions.

“We tried to get into the British Museum but were not allowed. You have to have a Media Pass and they couldn’t get it until the next day – they only allow so many in on each day… At least, that’s what we were told. Maybe they just didn’t like the idea of a man dressed in green farting and a guy belching.

“Then we went to a pub near the Oval and, because Paul’s a world record holder for belching, Imoto looked through a book and found a world record we could all do, which was sorting socks. The record was 17 pairs of socks in a minute into a box and, if we didn’t beat it, we had to eat a raw chilli.”

Paul explained: “I think the record used to be held by a Japanese guy, but he was beaten a while ago. You get 30 pairs of socks, separated and jumbled-up and you have to sort as many as you can into pairs inside a minute.”

“I only managed 8 pairs,” he told me, “so I had to eat this raw chilli. They were very delighted when I was giving it plenty of like… y’know…  Whooaaa! I’m burning up! and so on… and drinking milk.”

“I managed to sort 9 pairs,” said Paul. “So then I had to eat the chilli. I bit round the edge to avoid the seeds, but I made the fatal error of touching my eyes. As you know, after you eat chillies, you don’t touch your eyes or ‘touch downstairs’. I couldn’t see for about 15 minutes afterwards and I instantly had hiccups as well. I can only think that’s what CS gas feels like – but without the hiccups.”

“How did the Japanese react?” I asked.

“Oh! They loved seeing me in agony!” he said.

After that, our dynamic audio duo went to The Exhibit pub in Balham which has a video game in the urinals.

“There are only two or three of these in this country,” says Paul. “and ten in the world. The guy who runs the pub is the guy who invented it. He was on Dragon’s Den and didn’t get very far with it, but he says the idea has really taken off since the programme.”

“They probably thought he was taking the piss,” I suggested.

Paul did not react.

“There’s a screen above the urinal,” explained Paul, “and a sensor underneath and you pee to operate the game. There are three or four different urinals. There was talk of us using water bottles and pretending to pee, if we couldn’t rise to the occasion with all the film crew around us. But we managed.

“One of the games was a quiz which involved a Yes/No answer, so you aimed either right or left to give your answer.

“Another involved painting a picture. There was a picture and you just aimed your pee all over the place to colour it in…”

“There was another game where penguins came down a ski slope and you had to keep trying to hit them.”

“Yes,” he said. “Obviously, it was quite crowded with all the Japanese film crew in there with the two of us and she’s standing there shouting at us and commentating over the top of it.”

“And these games are in the pub the whole time?” I asked.

Paul did not react.

He and Mr Methane are true professionals. Here they are on the previous episode of Sekai no Hate Made Itteq!