Somewhere under the rainbow, mad comedians in Edinburgh

Yesterday at the Edinburgh Fringe, I was told the true story of a comedian who, a few years ago, staged his Fringe show at a free venue, thus saving himself a lot of money. He reasoned that he could spend the money he saved on hiring a PR person and on posters, flyers, advertisements: the full works. He worked his proverbial ass off and got no reviews, no media coverage, no audience. Well, on a good day, he got a handful or less of people in his audience; some days literally no-one. He lost £10,000. This is the reality of the Fringe for a lot of performers.

It could be argued you have to be barking mad to be a comedian, which is what I suggested to someone at yesterday’s Gilded Balloon launch party, but more of that later.

Yesterday afternoon, I saw award-winning Eric’s Tales of the Sea again: a beautifully-crafted show by the utterly sane (he may take that as an insult) Eric about his life on Royal Navy submarines, with a completely unexpected and devastatingly emotional ending. It has successfully played around the world. Eric was persuaded to become a stand-up comedian after being a regular audience member at  the late Malcolm Hardee‘s Up The Creek club. 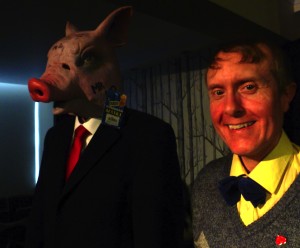 The occasionally Gollum-like (his own description) Johnny Sorrow, won last year’s Malcolm Hardee Award for Comic Originality at the Edinburgh Fringe. Last year he was performing as part of the Bob Blackman Appreciation Society – as he is this year. He was the funniest act I saw at the 2011 Fringe and you can take ‘funny’ in both its meanings.

He may be the same this year. What a full-throttle performance yesterday!

Originality is certainly the word – plus sometimes strangely experimental touches.

A Japanese couple walked in halfway through the hour-long show and watched in dazed incomprehension the unexplained parade of animal heads, weird noises, abstract speeches and dated cultural references which probably go way over the heads of even most Brits under the age of about thirty. What the Japanese made of it all I cannot even begin to imagine. Perhaps they thought it was experimental theatre, high performance art or just an example of impenetrable British humour.

And maybe they would have been partially right on all three counts. 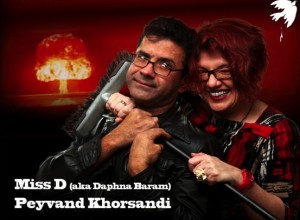 For more understandable comedy, they might have had more luck with Daphna Baram’s show Frenemies where she teams up with comedienne Shappi Khorsandi’s brother Peyvand for an Israeli-Iranian comedy hour. Daphna told me (and the audience) that she regards this as her ‘coming out’ show.

Until now, she has been known on the London comedy circuit as ‘Miss D’ to separate her night-time comedic persona from her day job as a serious political commentator and journalist. Now she is going to be ‘Daphna Baram’ in both worlds.

I have always thought she should not separate the two, as this strange diversity is her Unique Selling Proposition. And she can give an outsider’s inside view with both hats on.

Which I guess, to an extent, is what Denis Krasnov gives in his late-night Hour of Intellectual Filth. An outsider’s view. I saw him perform a few years ago at London’s eccentric Pear Shaped comedy club. Two people in the audience walked out back then and they were so highly-offended that they wrote to the club complaining about the specific offensive sequence in Denis’ act.

Pear Shaped’s Mr Fixit Anthony Miller checked an audio recording of the show and found that the highly offensive sequence they complained about did not actually exist. It simply had not happened. And I had been in the audience. They thought he had said something – a whole load of specific somethings – but he had not. Which was a bizarre tribute to his performance skills.

Back then, he was surprised that people found him offensive. This year, now New York based, he is intentionally trying to be offensive at the Fringe. At one point in last night’s show, he said, “I’m a comedian. My job is to expose lies,” but really his show is, as always, about playing with concepts of the mind. The show is neither off-puttingly intellectual nor is it actually definitively filthy. But it is mesmerisingly fascinating as he turns real comments about real situations into a bizarre form of fantasy without really ever lapsing into surreality. Indescribably interesting and highly original.

I find comedians a fascinating breed. 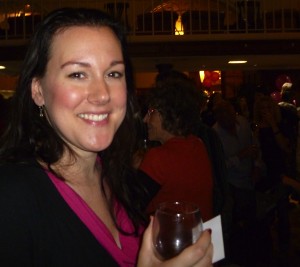 Which brings me back to that Gilded Balloon’s launch party earlier in the evening, where I met for the first time my Facebook Friend  Taylor Glenn, a former psychotherapist.

“So you were a psychotherapist with a steady income for eight years and then you decided to become a comedian with no sensible income,” I said. “For heaven’s sake why?”

“I was treating patients who were facing lots of life challenges,” she replied, smiling “so I thought why not create the biggest one in the world for myself.”

“But comedians are all mad,” I suggested.

“I actually don’t think we’re any worse off in the mental health department than the rest of the world,” she replied, “but we’re allowed to act a little crazy. We have our own therapy behind a microphone… We have the ultimate outlet to express our angst.”

“So everyone’s mad, but comedians can show they’re mad?” I asked.

“Oh yeah,” she said, “I think if you’re too ‘normal’ you fall by the wayside as a comedian.”

“The thing which gets me,” I said, “is that comedians – who you would think must be extroverts – are actually very often introverted and are terrified of exposing themselves. They perform but they’re frightened of revealing themselves.”

“There’s more of a mix of people,” Taylor said. “You come across a lot more introverted people when you’re working with actors and there are a lot of exhibitionist comics who, in their daily life, are constantly seeking attention and then cracking jokes. So I think we fall into two or three categories.”

Taylor’s Fringe show is called Reverse Psycomedy and, as a stunt (or maybe it wasn’t) she offered to give free psychotherapy to any comic who wanted/needed it at the Fringe.

“I think doing the Edinburgh Fringe,” Taylor told me yesterday, “has been a real experience for me: to allow myself to be vulnerable and really tell the truth on stage. And there’s no character to hide that. I’m an exaggerated version of myself up there, but I’m very much me.”

“Is that through doing a 60-minute show as opposed to shorter sets?” I asked.

“I think doing an hour,” she said, “you have to find some kind of narrative: it doesn’t mean you have to have a theme, but you’ve got to find a way to fill in the gaps. People can’t just laugh constantly for an hour. So you’re telling a story along with the laughter.”

“And that has to be somehow more truthful?” I asked.

“Well,” said Taylor, “I’ve found that for sure. Because I’m telling a story that has to do with my own life and, if I’m not being truthful, it’s not gonna work.”

Me? I think there’s still a lot of howling at the moon goes on when comedians come off stage and are alone with their thoughts.