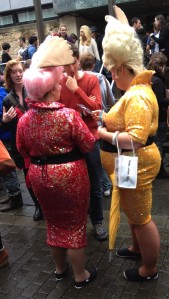 Yesterday, I blogged about a problem Giacinto Palmieri has in his autobiographical show Pagliaccio, which is “a true story of unrequited love and jealousy between comedians living together at the Edinburgh Fringe.”

His problem is that the two other people involved – a man and a woman –  are both in Edinburgh doing shows this year and the man – of whom Giacinto paints an unflattering portrait in the show – wants to come and see the show, not realising he is characterised in it.

Giacinto is not the only one with this type of problem. Another comedian this year includes in his show details of an Edinburgh Fringe love story with an American ‘journalist’ who is back in Edinburgh this year and whom he is now trying to avoid. The barely-disguised ‘journalist’ is actually a comedian and she is telling her side of the story in her own show.

In Edinburgh, that is normality.

Ever-discreet, I am not naming names, but both comics are Facebook friends of mine – and I bumped into one earlier today. If they read this and one or both would like to get more publicity for their show by talking about adding fact into comedy shows while avoiding mentioning the other person, I would be interested to hear. Edinburgh is all about publicity.

Or perhaps I am just getting old and gossipy.

You know you are getting really old when you can walk through Bristo Square during the Edinburgh Fringe and not get flyered for a comedy show. People see this fat bald man ambling along towards them looking like (I am told) a rather shabby bank manager who has just been sacked… and they assume I cannot possibly be interested in comedy shows. For some reason, I am the one who gets given any flyers for shows based on the Greek classics, family traumas and old age angst in North America.

Yesterday, though, I actually got flyered for a comedy show. The flyerer – a well-spoken Englishman of a certain age – followed me, falsely smelling an immediate ‘sale’. 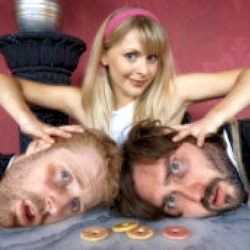 Hennessy and her friends – A History of Violence

The flyer was for Hennessy & Friends’ A History of Violence which, according to a stapled-on piece of paper, The List has called One of the Top 5 sketch comedy shows at the Fringe.

“It’s a girl leaning on what appears to be two severed dead men’s heads,” I observed.

“That’s my daughter,” the flyerer said.

We got into conversation about why some Scots now really do pretty-much hate the English.

“I do feel genuine resentment towards me when they hear my English accent,” the flyerer said.

“I think it was Margaret Thatcher,” I said. “Before that, there was good-natured rivalry like you might find between Lancashire and Yorkshire…”

“I’m from Lancashire,” the man interrupted.

“Well you know then,” I responded. “It’s good-natured. And it used to be the same with Scotland-England. But I think people felt that Margaret Thatcher didn’t give a shit about Scotland. She figured – entirely reasonably – that there was no point sucking up to the Scots because it was not going to get Conservative MPs elected – that was a lost cause. So she ignored Scotland or worse. And, after that, there seemed to be a real animosity crept into the Scotland-England thing.”

“I lived up here in Edinburgh in the late 1980s,” the man told me. “Down near the Dudleys, down Leith way.”

“Before it became Yuppie?”

“Probably. I don’t know. We were looking for a house and couldn’t find one. They told us: We only sell villas in Edinburgh.”

“And you pick up a distinct nastiness in the air?” I asked.

“No, no,” he said. “I wouldn’t go so far as to say nasty. If I meet Scotsmen who’ve travelled, they’re a completely different kettle of fish. But I came across someone I don’t think had travelled the day we signed the contracts for selling our house in Edinburgh. Coming out of the Notary’s, my wife and I were talking and this guy heard our accents and, as he came up to us on the pavement, he just went:

“No, there was definitely a bit of sinister stuff there. My wife and I just looked at each other.”

“And your daughter is on this flyer.”

“My daughter’s name is Miranda Hennessy and I’m Gary, her father. She’s an actress but she’s got a comedy bone – you can always tell when someone’s got comedy in them. They’ve scrimped and saved to be able to put this on. They’ve done loads of promotion and got some good Guardian reviews ahead of coming up here.” 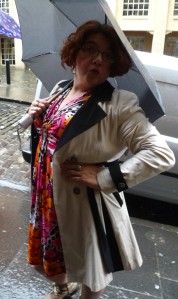 Edinburgh is all about publicity. Daphna Baram, the stand-up artist formerly known as ‘Miss D’ is performing a show called Half Past Bitch at Bob Slayer’s Fringe venue The Hive.

When she was promoting it on radio in London before she came up to Edinburgh, she tells me:

“The radio station told me they had a very strict policy about swear words and that we would be taken off air immediately if we as much as mentioned the actual name of the show. So we had to refer to the show as Half Past Itch which – as we did not neglect to remind our audience – actually sounded ruder than the show’s real title. We were told that saying ‘vagina’ or ‘chlamydia’ was borderline but ‘bitch’ was totally unacceptable.

“This,” Daphna told me, “led us to a discussion on air about one of your blogs that week, which was all about censorship in the Fringe Programme and I was quoting bits. It was good fun.

“Ironically, when I showed Bob Slayer the poster for Half Past Bitch, he suggested we print the word bitch’ three times its original size. (Note to readers: Bob Slayer had a small part in the movie Killer Bitch which I financed and which also had problems over the use of the word Bitch – with WH Smith’s and the big supermarket chains.)

“Bob,” Daphna told me today, “was totally right. People’s attention is transfixed on the word ‘bitch’ faster than on my spectacular cleavage.”

I saw both Half Past Bitch and Daphna’s cleavage this afternoon. Both were impressive.

And so was her show. 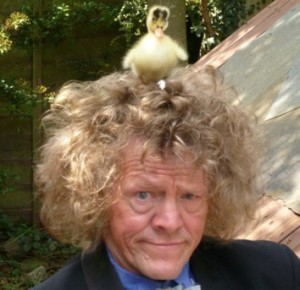 Charlie Chuck gets ahead with a duck for technical rehearsal

But by 5.26pm this afternoon (the exact time is relevant) I was having tea with Charlie Chuck at the SpaceUK venues’ launch. His Cirque du Charlie Chuck show starts tomorrow.

“Me latex suit gets here on Tuesday,” he told me. “It’s orange and blue. The technical rehearsal is at two o’clock today. It’s six o’clock now, so I’ve got 25 minutes to get there.”

In Edinburgh, that is normality.

And, in Edinburgh this is publicity:

Charlie Chuck will be appearing in the two-hour Malcolm Hardee Awards Show on Friday 24th August.