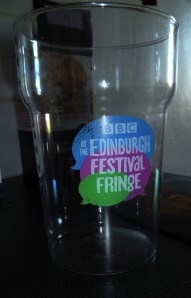 The BBC are giving away plastic pints

I woke up this morning to two things. One was the sound of comedian Janey Godley trying but failing to vomit in my toilet. I fear, dear reader, that you and I may hear more of this in the days to come.

The other thing was an e-mail which started:

Just writing to say how much I enjoy reading your site. We at Lifeinsurancequotes.org recently published an article “8 Ways Funeral Homes Will Try To Rip You Off”, that we think is tailor-made for your readers.

Either their computerised spam system is totally out-of-control (surely not!) or I must be mis-targeting this blog.

I have little good advice on funeral homes.

Janey Godley once told me that, if you are going to murder someone, the best hiding place for the body is in a graveyard – the police will not look in a graveyard for a dead body and, if they are tipped-off, they will be wary of causing a public outcry by potentially digging up a body which may not be the missing victim.

That is my only funeral tip for today, but it may prove useful for Israeli comic Daphna Baram. 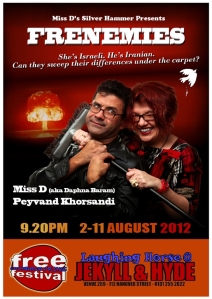 Whoever killed Jesus, it wasn’t Daphna

Yesterday, she told me: “There was a very drunken guy in the audience at my Frenemies show (it’s only on until Saturday) – Yuri from the Czech Republic. At some point during my set, the idea that I was Jewish – at least nominally – penetrated through the layers of beer in Yuri’s mind and he started heckling: You killed Jesus! You killed Jesus!

“I remembered I had a routine from my first Christmas as a comedian. Clearly this was a good moment for resurrection.

“In my most authoritative voice (I do authoritative well) and with, I regret to say, a certain degree of c-word usage, I informed Yuri that the whole 30 shekel story is highly non-credible as no Jew I’ve ever heard of would sell a hippy to the italian mafia for the equivalent of a fiver…

“He kept silent for a while but, in a later section about my military training in Israel, he started heckling again. I told the audience. I saw Yuri outside and invited him to the gig and thought Great! I’ve pulled!… But now all I can think about is where I am going to hide his body…”

Well Daphna now knows, courtesy of Janey Godley, she can actually do this with little comeback.

But back to the Edinburgh Fringe proper… 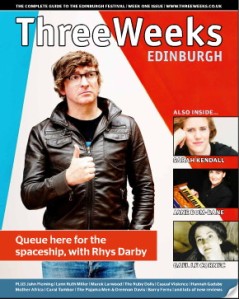 Three Weeks – on the streets of Edinburgh now

In my first weekly column for Fringe magazine Three Weeks today, Mervyn Stutter criticises the BBC for putting on too many free shows at this year’s Fringe, to the detriment of hard-working performers who are already having a bad enough time with the big TV names and the Recession. You can read the Three Weeks piece by picking it up in Edinburgh or clicking here or you can download the whole issue here. I will post my golden words here on this blog in one week’s time (when the paper is no longer on the streets of Edinburgh).

I had another BBC-bashing angle punted to me last night, when I got chatting to someone who had better remain nameless. He works for a radio production company and has a lot of dealings with the BBC.

“It’s an odd thing,” he told me, “because, in America at the moment, there’s a huge flowering of female-driven comedy. You’ve got 30 Rock, Girls, the Mindy Kaling Project – loads and loads of female driven comedy – and people say part of the reason for this is the influx of women into US TV production. But, in Britain, we are not having that same increase in female-driven comedy.”

“Maybe because most producers here are male,” I suggested.

“Not now,” he corrected me. “Not in radio. Most of the level entry producers at the Beeb – the ones who comics new to radio would be working with – are female.

“At the BBC, there’s actually a big influx of women into radio production but, as yet, that doesn’t seem to be translating into a flowering of female comedy – certainly not at Radio 4 which has traditionally been a proving ground for comics before they get onto television. Radio 4 does not have many female-led, female-driven, female-written, female-fronted shows.

“That’s a generalisation, of course,” he said, “Jane Berthoud is top dog there and she’s tremendously supportive of women, but the increased number of female producers has not helped women in comedy.”

“I have no idea,” he said. “All I’m saying is it’s an interesting area. There are now lots of female producers, which is good. Maybe the heterosexual ones are more interested in and more physically attracted to the male acts and therefore female comics are getting an even bummer deal that they were before.”

Possibly realising he was on dangerously non-PC ground, he continued: “It’s very difficult to un-pick because, statistically, if you looked at the number of shows made by men over all… Maybe there are more shows made with male stars because there are more men pushing to get in. Maybe sometimes there’s a lot of schmoozing and, rather than being about talent, it’s about who gets on with people and who people want to sit in a pub and chat and get drunk with.”

It is certainly an interesting idea and there must be something psychological going on beyond my fathoming. 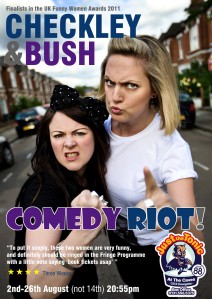 Last night, I was at a party thrown to celebrate ten years of the Funny Women organisation. Very hard-working. Very effective in raising the profile of female comedy, But still British TV and radio shows are generally skewed-away from female performers.

I left the party to see excellent character comedy from Checkley & Bush. They’re better than a lot of the under-experienced new male comics who pop up on TV and in radio. 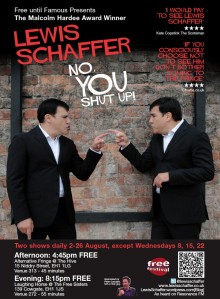 Lewis Schaffer, a masterclass in offending

No 8 in the list is American comic Lewis Schaffer, whom I had been chatting to even earlier in the day. There was a lot of chatting yesterday.

As I came out of Checkley & Bush’s show, I got a text message from Lewis which said simply:

I had 65 punters at tonight’s show. There were 40 walkouts.

Tell me more and I may blog about it.

He later told me what he had said.

Perhaps being truly offensive is one thing women comics cannot get away with. As if to prove this, later I was walking down Niddry Street, and found comedian Bob Slayer standing in the street outside his Hive venue.

“Just wearing a lettuce on her fanny,” said Bob. 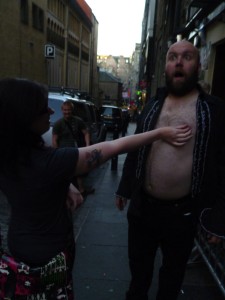 Bob Slayer has his nipples tweaked

“She had nice tits,” a female staff member added, tweaking one of Bob’s nipples. Passers-by ignored it. This is the Edinburgh Fringe.

“The lady with the lettuce was a friend of Frank Sanazi’s,” said Bob.

“That might go some way to explaining it,” I said.

“Well,” said Bob, “Frank came and then that happened and then I had to get naked. It depends how you rate a show. It was the most avant-garde show I’ve ever managed to do. Apparently there was a reviewer for The Skinny in there, so I’m looking forward to seeing what they made of it. I hope it was the guy who refused to get on stage. There’s no way I’m going to get a good review but I hope it was that guy because he HATED it.”

At the Fringe, being loved or being hated are good. Being ignored is bad. Oscar Wilde was born before his time.