Sex scandals spread at the BBC… ten years ago… 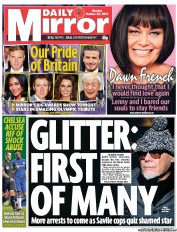 I have been getting (for me) abnormally high hits on one particular old blog of mine. Normally my blogs get hits on the day of posting and a couple of days after, then tail off to nothing except for a few occasional random hits.

This particular blog – now 27-days-old – has been getting steady hits since it was posted. Yesterday, it had 2,897 hits. That’s a lot for an almost one-month old blog of mine. It describes the background to the infamous hoax Have I Got News For You transcript about Jimmy Savile.

The front of today’s i newspaper

Yesterday, Gary Glitter was arrested in connection with the police enquiries into Jimmy Savile’s paedophile attacks. Today, the newspapers are full of the story.

As the thing I was going to blog about this morning fell through, I looked in my electronic diary for this day ten years ago – Tuesday 29th October 2002.

It was the day the BBC sacked presenter Angus Deayton from Have I Got News For You because newspaper stories about his sex life had become a subject of the programme and therefore, it was said, he could not be a detached presenter. Panelists Paul Merton and Ian Hislop had gone for his throat again on the show the previous Friday. The next show (recorded on Thursday night for a Friday transmission) was going to be presented by Paul Merton while the producers looked for another full-time presenter.

The tabloids on that morning ten years ago were also claiming that there were now 29 separate allegations of rape against former Blue Peter presenter John Leslie. I had not really been following the unfolding story, but reportedly presenter Ulrika Jonsson had been in hospital for three days after her alleged rape.

Meanwhile, real life went on. A friend of mine sent me an e-mail about her small son:

He looks very peaky and white with big black rings under his eyes. The only thing that helps is apparently a double dose of Toy Story every day. It is driving me nuts, I sit there mouthing the words to all the characters.

Her husband was ill too:

He is still coughing his guts up and I am in the best shape of all but even I am still taking cortisone pills to clear the catarrh.

Also on that day, someone I worked with gave me some advice: “Never do deals with people whose names begin or end with the letter O”

That basically covered the Irish and Nigerians.

So there we have it ten years ago.

Sex scandals at the BBC, disease and racism.