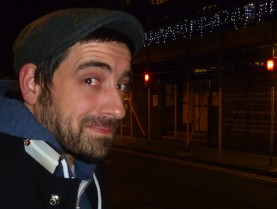 Comedian Matt Roper is flying to India on New Year’s Eve for two months. At least, that was what he intended to do.

“I think my new principle should be Don’t book flights when you’ve had two bottles of wine and a load of Guinness and a few tequilas,” he told me over pizza in London’s Soho.

“I’d had a heavy night out and woke up in the morning. My life most mornings, if I’m being honest is… Well, if you’ve ever seen a window with condensation on it and it slowly clears away… That’s my brain in the morning… I remembered doing something about a flight, so I went and checked my emails and the Confirmation was there… Flying out on 31st December, which is perfect for me because I don’t like New Year… and coming back on June 3rd…. What?… June 3rd?!!… but the most surprising thing was I’d managed to choose my seat and decide what sort of meal I was having.

“I’ve been many, many times to India. I love it out there, but I haven’t been for about six years. I’ll go to Goa and then hopefully write my Edinburgh Fringe show in some hill station. But my point is Never book a flight when you’re hammered.”

“Maybe that should be your Fringe show title,” I suggested: “Never Book a Flight When You’re Pissed. But you shouldn’t go to India. You’re in the iTunes Comedy charts at the moment with Happy Goddam Christmas, this Christmas song of yours.”

“When that was released,” I said, “it was inconceivable it could become a standard festive song like White Christmas.”

“Is it the first song you’ve written?” I asked.

“No,” said Matt. “All the Wifredo stuff you hear at Edinburgh is all orginal songs, though I did one of those in collaberation with Pippa Evans.

“With Happy Goddam Christmas, I had the music for a long time – the basic structure of the song – it was about an ex I was feeling particularly, you know, bitter and jaded about. But the song isn’t iactually about me feeling bitter about an ex. I took it to Pippa Evans and she added a middle eight onto it and we worked together on the lyrics.”

Pippa Evans performs as her on-stage character Loretta Maine. Someone once described her as ‘Dolly Parton as seen through the lens of Mike Leigh’.

“Arthur Smith has a little cameo in the video,” Matt told me, “and we have Sanderson Jones and Imran Yusef – in the video, they’re in the band – Arthur’s in the toilet brandishing his Hammond organ.”

“So you wanted to make lots of money with a Christmas song?” I asked.

“Not really,” said Matt. “It was just about having a bit of fun. It’s easy to release whatever you want on iTunes. It’s quite incredible how the music industry’s changed. Wouldn’t it be wonderful if the Edinburgh Fringe were along similar lines? If you could cut out all the middle people.”

“Well,” I said, “the Free Fringe and the Free Festival sort-of do that. Are you thinking of doing one of the two free festivals next year?”

“Possibly. I had a lot of fun with Just The Tonic this year. I would like to see the Fringe level out into an event where your established comics and TV names are on the ticketed Fringe and the less-established acts can realistically afford to do it and make at least a little bit of money by the end of it.”

Matt’s father, George Roper, was one of The Comedians on the seminal Granada TV comedy stand-up show of the 1970s.

It was a different era.

“There was a club called The New Luxor Club in Hulme, Manchester,” Matt told me.

I raised my eyebrow at the mention of a club in Hulme. I went to Hulme a few times when I worked at Granada TV in the 1980s. If you went to the Aaben Cinema there, when you came out, you might find three youths sitting on your car bonnet saying: “So how much are you gonna pay to get your car back?”

“In the 1960s,” Matt told me, “they would have ‘gentlemen’s evenings’ at some of the Manchester social clubs, working men’s clubs, cabaret clubs. It would not be uncommon to have six stand-up comics and six female strippers/exotic dancers on one bill. At this point in the 1960s, it was legal to be naked on-stage, but it was illegal to move.

“The police decided to bust The New Luxor Club and my father was one of the six comics performing there that night. The police raided the club and charged the comedians with aiding and abetting the club owner – a guy called Vincent Chilton – for running a disorderly house.

“The six strippers and the six comics were in the dock at Manchester Crown Court and the police had to stand up in the court and tell the jokes. I swear – no word of a lie.

“I don’t know the exact date, but the police had to get up and say something like On the 28th of June 1965, George Roper stood up on stage and said the following joke: ‘A policewoman and a policeman were walking ‘ome from t’station one night. Ooh, she said, I’ve left me knickers back at t’station. Ooh, don’t worry, said t’policeman. Hitch up yer skirt, let the dog ‘ave a sniff. Half an hour later, t’dog comes back with t’sergeant’s balls in its mouth’…

“Can you imagine? In the Crown Court? The public gallery had to be cleared because everyone was laughing so much.

“There was a guy called Jackie Carlton, who was the apotheosis of Manchester club comics at the time and all the younger comics like Frank Carson and Bernard Manning looked up to him. He was very camp, very flamboyant. When it was his turn in the dock, the judge asked: Was that one of your jokes? and he said, Yes, but I tell it much better than that. He was found guilty.

“My dad was the last comic up and, when it was his turn to stand in the dock, the judge asked Is that one of your stories? and he said Oh! Not heard that one before and, for some reason, he got off with it by playing the underdog, as he always did. The other five comics got fined, but my dad got off with it.

“I asked my uncle about it not long ago and he said people were queueing round the block to buy the Manchester Evening News to read the jokes that were told in court.”

Below, Jackie Carlton talks in the 1970s about camp comedy and obscenity…