Last November, I blogged about comedian Chris Dangerfield’s visit to Swansea with Trevor Lock for a gig which, let us say, divided the audience.

At the time, Trevor told me: “A fair few people got up and left by the table-load, unable to stomach it. Others who stayed forgot they didn’t like it and found themselves laughing. Many just ignored what was happening on stage and just carried on with their Friday night but many also seemed to be only waiting for Chris to stop so they could start singing his name again.”

It was producer Richard Griffiths’ first gig as a promoter and also his first gig as a stand-up comedian. The evening was coincidentally filmed as part of a six-episode fly-on-the-wall BBC3 documentary series called Swansea Call Centre, due to be screened soon.

“The series is gonna be rammed with David Brent type characters,” Richard tells me.

By last November, the Beeb had been filming for over a year at the call centre where Richard then worked (he has recently left).

As he was in the process of organising his first comedy night and, as he had Chris Dangerfield and Trevor Lock coming from London to Swansea to perform, the film crew wanted to follow the storyline of Richard ‘going showbiz’.

“Will I become the first person in Britain to have his stand-up debut watched by over a million people?” Richard asked me this week. “I’m new to all this. I had always wanted to perform and it was a combination of that, Chris saying in one of your blogs that I was hilarious but ‘too scared’ to go on stage and an email from a mate that made my mind up. The BBC were there filming all night and I understand they are definitely using it as one of the stories in an episode… So, going by their usual figures, a million people will see my comedy debut… Is this a world record?”

It was a charity gig and Richard raised £2,000 that night. The girl concerned recently had her operation successfully.

But now – tomorrow – Richard has booked Chris Dangerfield back at his new Swansea comedy night, this time with by New Zealander Benjamin Crellin.

“Are you mad?” I asked Richard last night. 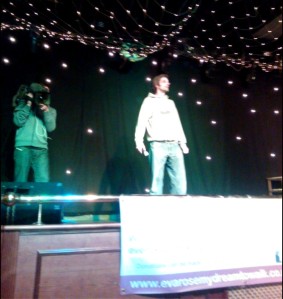 “Well,” he told me, “to put anything on in Swansea without the full blessing of the Freemasons you have to be mad. But Chris was on his way to drug detox last time, so the city ain’t seen the best of him yet. Anyway, I’m actively looking to upset everyone with these comedy nights purely to offset all the good work I do behind closed doors. I was threatened with ‘bad Ju-Ju’ by a local Jehovah if I had Dangerfield back in Swansea but it’s a risk worth taking.

“I packed my job in a few weeks back so, even though I make no money from these nights, I create employment for others from my lofty position of dole bum.”

I asked Chris Dangerfield if it was a mad idea for him to go back into what, last time, was like an over-sensitive lion’s den of a gig.

“Well,” he replied. “It’s good for comics. They shout at you throughout the whole gig, they throw things at you, they heckle in grunts and groans and people storm out ‘in protest’, not at what you’re saying but at what you’re not saying  – Where’s the jokes? they shout.

“All these things happen elsewhere of course but, with these gigs, it’s as if that bloke, woman or couple from one-in-three gigs everywhere else have all turned up to this gig. It teaches you an important lesson – the gig is about them, not you. They’ve paid to have a laugh. The comic is getting paid whatever happens. Lose the ego. If the audience are enjoying what they’re doing, just help facilitate that. Don’t get all uppity about it and don’t think But what about my story about the soap-dish?

“Richard’s Swansea gig is like a baptism of fire and gigs afterwards feel positively breezy in comparison.”

“So,” I asked, “are you going to tailor your show to the audience?” 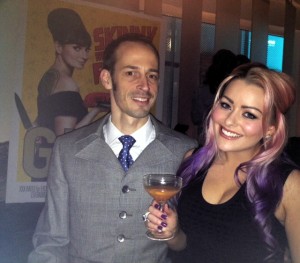 “Unless it’s one of my own 60-minute shows,” Chris said, “I don’t really know what I’m going to talk about until I’m on stage. I’ve got a lifetime of stories. Often, I’ll just start chatting with the audience and something will spark something off – a memory I’m excited to remember – and the audience responds to that.

“If they’re not playing ball, I’ll do something that I hope on the spot they’ll appreciate; which is another ability I had to learn, often painfully. Once, I opened with a 5 minute improvised song – mainly the repeated chorus What’s your favourite cake? I kept trying to get them to join in, convinced they would. But they didn’t.

“I’ve frequently also been politely asked just to leave. A promoter once called me over half way through a 30 minute set and said calmly, almost apologetically: Can you just stop, please. I’ll still pay you.”

“Did you learn anything from your last show in Swansea?” I asked.

“Yeah,” Chris replied. “I quite like the Swansea crowd. It’s not a nice place Swansea. In many important ways – such as cultural and economic – it is neglected and poverty-stricken. But the people are refreshingly human. There’s a simultaneous acceptance and pride. I like people from Swansea. And they chant my name a la football terraces for a good five minutes after I’ve walked on stage, which is both pleasant and easy money.” 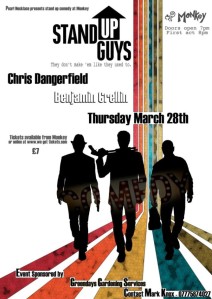 From Richard’s point of view, though: “The apathy of the locals is my real issue. My Don from Sexy Beast ticket selling style don’t always work. This will be my third night promoting a gig. So apathetic locals, huge distances for comics to travel, my own debatable mental health and a war chest of about £26 makes it all seem a bit daft really. But what’s the choice? I’m only after a regular 150 needles I guess… but ideally all in the same haystack.”

“Have you got an escape plan?” I asked Chris Dangerfield. “A get-out strategy like the Americans should have had in Afghanistan?”

“You got any photos from last time that I can use without people suing me?” I asked.

“Maybe on the other computer,” he replied. “I’ll look. Remember, Trevor Lock refused to go last time unless I stopped the smack and got by on codeine tablets. Predictably, I took about 30 and felt quite nice, but the camera picked up an altogether different image.”