When I met comic Matt Price for tea last week in London, I did not know his partner is Glasgow comedian Martha McBrier.

“Martha got attacked,” he told me, “and then, about a year later, she was diagnosed with a brain tumour and, between those times, a member of her family went to buy a gun to shoot the man who attacked her.”

“Martha was attacked in Glasgow in 2007. The guy who lived above her attacked her. He was a small-time drug dealer.

“Martha and I were in a long-distance relationship. I was living in Cardiff, struggling as a comedian, but just about holding it together, getting to see her once a month or so. She was doing well in comedy, but she got attacked and it all ended. She has taught me more than anyone about comedy and I felt guilty for quite a long time that I could do it and she wasn’t physically able to.

“She lost not the ability to do it, but the… the… She went from being truly hailed to being in a room that was too big and everything went wrong.

“The guy kicked her in the side of the head. After the attack, she went downstairs. She phoned the police. Half an hour later, there was a knock on the door. Four or five of them from upstairs came in. One of them hit her. He was wearing a ring and it bruised her face. The hearing in one ear had already gone. The other ear was about 75%. She said it was like being underwater.

“When the policeman came, he was very very upset. He said he’d been in the business for thirty years. He was really distressed. He had to shout. The guy had, essentially, smashed her face in. So she went to hospital and a few weeks later was diagnosed with a brain tumour… It might have been a few months later… You know what time is like.”

“The brain tumour also affected her hearing?” I asked.

“It’s a thing called an acoustic neuroma,” said Matt. “It’s a non-malignant brain tumour. One of the side-effects is you lose your hearing.

“She went to the Edinburgh Fringe in 2008 and had a nightmare. The room was too big. She used to like to interact with the audience but, because she couldn’t hear and her balance was bad, she wasn’t able to do it any more. The venue told her she couldn’t get off the stage. I’m not saying she won’t come back. She did a kids’ show last year and got two 4-star reviews.”

“But,” I said, “before this, after she was attacked, people wanted revenge…”

“No-one did anything,” Matt explained. “So it made it very hard. And the guy lived above her for another 18 months. He boasted one day about how he’d been boxing with his neighbours. He also beat up a teenage boy in the close and nobody did anything.

“So someone in Martha’s family went to see somebody about buying a gun to get it dealt with. The guy was an old-fashioned debt collector who used to screw people’s hands into tables to get their undivided attention. Like all violent criminals, he was quite blasé about the whole process. He still sells cigarettes, but his wife doesn’t know – because she disapproves of cigarettes.”

“But,” I asked, “she doesn’t mind him screwing people’s hands into tables?”

“This is how the justice system works in Moodiesburn, where Martha lives. I went there on New Year’s Eve and went to bed just after ‘the bells’ – at about a quarter past midnight. It was my birthday on New Year’s Day and I was awoken at about 2 o’clock in the morning by the sound of fireworks. I thought Oh great! The Scots! This is typical Hogmanay!

“Martha’s sister came in about 11.30 the following morning, when I was looking forward to my birthday breakfast, and said a local drug dealer had sold some heroin to a young boy who died and the fireworks had been the sound of petrol bombs being thrown at the drug dealer’s house. That’s how the justice system works there.

“It’s a very close-knit community. In the case of Martha being attacked, everybody knew. It became a question of Well, if everyone knows about it, who’s going to deal with it and how will it go? Bear in mind that the person who attacked her… everybody knows his family as well and they all know that he deals drugs – albeit at a very small level, because he wouldn’t be on that estate, surrounded by poverty, if he made a lot of money. He made enough money for a couple of sports cars.

“So this member of Martha’s family went to buy a gun to shoot the man who attacked her and the guy who could have provided her with a gun said No. I’m a criminal. I’m a professional. You’re not. Take your money. Buy Martha something nice.

“I met a few people and eventually someone phoned me and said: Look, I know what’s happened and I will take you in my car to meet someone who can genuinely help you. We ended up in a hotel. I’m a big man and the person with me was a very big man. We went down into the gym and there’s this old guy in his mid-70s, white hair, pounding on a treadmill like I’ve never seen before. 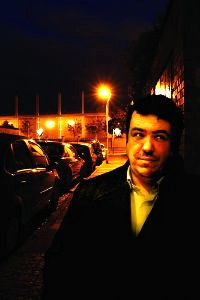 “The old guy had a history, a reputation. His sports car was outside with a designer number plate on it. He told me to go upstairs and sit at a table. The reason, I found out later, was that there were cameras everywhere – kinda for my protection and for his. If anything kicked-off, the cameras would pick it up.

“I was told to wait for half an hour. An hour and a half later, he turns up, comes over and says, Very nice to meet you. What do you want? And I said, Well, I don’t know.

He said: I’ll buy you a cup of coffee and give you ten minutes.

Eight hours later, we were still together. He drove me around, took me to his house, showed me all over Glasgow, He explained how he’d got into crime. He said he’d gone to school with ten other people who were later convicted of murder and told me: This is not an excuse for what I’ve done. But I needed a way out, so I stole a raincoat and then I started to steal other things in the raincoat and then I wanted some credibility so I stole another raincoat and got a friend and then we stole to order. Then, about five years later, I did my first warehouse. Then I realised the psychology of criminality is what really counts. If you tell someone you can do something and you tell them with enough conviction, then they will believe you.

“He asked me about Martha and then said: You see that young lad over there? He’s got a slash down the side of his face. Someone cut his face. His dad shot the guy who did it. That’s how you get revenge. He didn’t kill him; he shot him…. to teach him a lesson.

“I sit here all day and watch people after my work-out. I’m no longer in business. I speak to people who are. I watch people. I’m an expert. I’m a psychologist. I can tell by the look in your eye that the sort of hurt you want to inflict on this man is the type of hurt that will change you both forever. You need to ask yourself do you want to make the change? It may sound like something from the movies, but do you love Martha more than you hate the guy who attacked her?

“He told me that the life of a drug dealer… The cruel irony is that drug dealers usually end up with children who’re addicted to drugs and/or die of them.

“They make millions of pounds, he said. They have no friends, they’re looking over their shoulder all the time, they’ve got nowhere to spend it and someone’s always trying to knock them off the top of the perch because they want that ‘respect’. But it’s not respect.

“Then he said: Nobody would blame you if you beat the guy’s door down in the middle of the night. That’s down to you. I know what I would do. But I’m not you, so you have to make your own decision.

“I walked away from that quite comfortable with it. I was upset. I was emotional. But it was a real release. There’s no way in the world I’m going to get a golf club and beat someone to death with it. I’m just not that guy. I’m not from that world. I needed to know that it was OK for me as ‘a man’ not to have to take violent revenge. And also, if I’d done that, Martha would have killed me anyway.

“About a year later, I went to the old man’s funeral. A beautiful church. It’s snowing outside. There’s about 500 people there and I’m sat on the back row with these dodgy-looking guys, some of whom are wearing sunglasses.

“I got the Megabus up to his funeral and the criminals thought that was hilarious. They all have money and can drive around in flash cars. The fact that not only was I prepared, as a non-criminal, to go and meet him but to go to his funeral and pay my respects to him and to come up on the Megabus for twelve hours from Cardiff – they thought it was the funniest thing ever. I was told I got huge kudos, but a lot of laughter.

“I told a comedy promoter that story and ended up going to Broadmoor, meeting these really bad guys…”