(A version of this piece was published on the Indian news site WSN)
(NOTE: I have changed the names of the people in Bahrain) 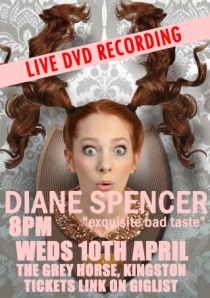 Next Wednesday, Diane Spencer is recording a live DVD of her Exquisite Bad Taste comedy show.

“What is your image?” I asked her yesterday via Skype. “I guess it’s fresh-faced, clean-cut English rose who shocks by saying rude things?”

“I prefer ‘edgy’ instead of ‘rude’,” she told me. “I have never told a joke to offend anyone. The first time I was called ‘shocking’, I was surprised. I thought Am I? And the first time I got called ‘crude’. I was really surprised. I’ve never aimed to be crude. When people call me ‘foul-mouthed’ I think OK, well I understand. I think I just have an in-the-pub sense of humour.”

“So that promoter booking you in Bahrain recently was surprising,” I suggested.

“When they initially booked me to go to Bahrain,”said Diane, “I actually asked them: Are you sure about this? You’ve seen my act. And they told me: You’re exactly what they want in Bahrain. They’ll love it. Don’t censor your act. They have people going over there censoring their acts and that’s not what they want at all. They want you to do what you do.

“There were two gigs: one at a local comedy club and one in the hotel where we were staying.

“I was nervous about the whole trip , but I talked to my friends who had been there and they said: As long as you’re polite and you observe the customs...

“Well, I don’t walk around in short skirts and sleeveless tops anyway. I’m ginger. I don’t do very well in the sun. I wore a headscarf. I was trying to be respectful of other people’s culture.

“I went over there with Joe Lycett and Jarleth Regan and Joe was already slightly nervous. He told me: I keep asking them about the gay thing. 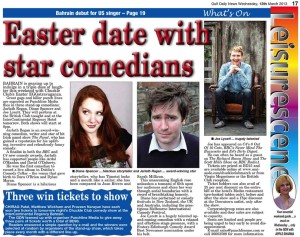 The Gulf Daily News publicised the fateful show in Bahrain

“I told him: Well, you’re a gay guy. I’m an outspoken ginger woman. So I think they’ve sent us on purpose. I think it’s going to be fine, otherwise they wouldn’t have made this particular weird selection.

“So we fly into Bahrain and meet Peter, who has organised everything, He says to me: I saw your show at the Edinburgh Fringe. I really enjoyed it.

I say, relieved: So you’ve already seen my act!

“So we arrive at the comedy club that night and they’re mainly British people. There were not many people wearing the headscarf.

“We sat backstage and there was an exit to the outside where there was this massive wall at least eight feet high. Then we met the guy who was organising the gig.

“So everything’s OK and the woman who books the comedy – Susan – comes in and she’s lovely. She’s enthusiastic: Oh, I’m so excited about this! she says. I’m so excited!

“So Joe and I think: This is all going to be good.

“Muhammad tells us: Just do it! Just unleash! Just do it! I don’t care what happens! If they don’t like it, who gives a shit? It’s comedy! You guys are hilarious! Go for it! Whatever they say, I’ll take it!

“And I thought: Well, that’s lovely. How nice. He’s giving me creative freedom.

“So the gig starts and Jarleth gets up on stage and does his act and everybody loves it.

“Then Joe gets up. They LOVE Joe. He keeps saying Salam in such a camp way they find him absolutely hilarious.”

“And he mentions being gay?” I ask. 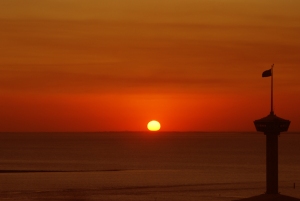 “I walk on stage and there’s two tables of women who fold their arms and glare at me. They are the Any other woman is a threat kind of women.

“Well we WERE given censorship rules. Two rules…

“First rule: Do not mention politics or the local situation or the recent troubles. One of the boys did touch on it, but very lightly.

“The other rule: Nothing about the Bahrain Royal Family.

“Now, being called Diane Spencer, I had pointed out to Susan beforehand: Look, I do have jokes about the Royal Family, but it’s the British Royal Family – Is this OK?

“When people laugh, it’s really great. Sometimes they don’t laugh and I do try and say to them: Look, it did happen in 1997 – Diana’s death – so I think it’s OK if we laugh about it now. 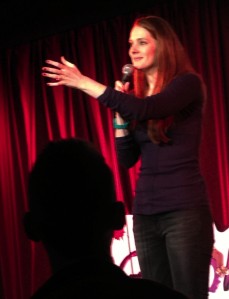 “So then what happens is I fall back to my super-clean, completely non-offensive material about my eyesight, my tooth, my ginger hair. I start to win them back and then I realise I haven’t got many options left now in my immediate mind. I have got options. But I can’t remember them. I can only really remember my British comedy club set. So I do my club set.

“And the reaction is incredibly mixed.

“At the end, when I say Well thankyou very much, half the crowd cheer and applaud. Twenty people have walked out. And the other half of the remaining crowd seem to be in a kind of weird shock.

“I walk offstage and… well, I don’t just walk offstage, I walk out of the building to this place with the high wall and I just stare up at the sky feeling a million miles from my culture.

“Joe comes out to say Hi and he can see I’ve got tears in my eyes and he’s telling me: No, no. Just relax, relax.

“Then Susan comes out and Peter and Muhammad come out. Susan is panicky and stands about two inches away from my face and says: I’m going to be taken down to the police station! They say it was public obscenity!

“She is talking very, very fast and Peter is trying to calm her down while saying at the same time to me: No, that’s OK. You did… I love what you did and I… and everybody is kinda really confused. And what happens eventually is that Peter sweeps Susan and Joe away, leaving me and Muhammad outside.

“I’m one side of this eight-feet wall and I think maybe if I go outside I’m going to have stones thrown at me… by British people!

“But Muhammad says to me: This comedy club! This thing! Oh, I lose thousands on it! And then he tells me this story about when the troubles were happening a couple of years ago and they took him into custody for two weeks – He told me what happened – And then he says: 36 million? Gone!

“They seized his assets.

“So then I thought: Well, my problems really are nothing. My bad gig is not an issue. 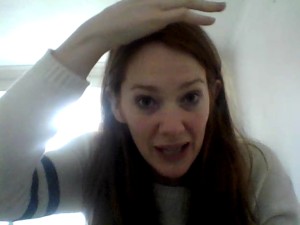 “The next day, I sat by the pool at the hotel and restructured my set. I know people say Oh, you should just do what you do but, no, it’s about the crowd.

“I played Tetris in my mind with all my old material.

“That night, we re-arranged the second gig, which was in the hotel. Jarleth went last, Joe went first and I went in the middle. The hotel had drawn a bigger crowd, because people had heard what had happened at the comedy club the night before and were coming to see this cataclysm.

“In the break, people were coming up to me saying: We thought you were fantastic! You should START with the filthy stuff! Those people last night! What’s their problem? That was great!

“I also found out that the manager of the local comedy club had actually run into the dressing room the night before, after the gig, to try and find me and tell me that he loved it and to say he didn’t know what was wrong with the twenty people who walked out. He said I loved it!

“But, because of me, they’re now putting a disclaimer on the local club’s leaflets stating that they do not control any of the comedians.”