A couple of months ago, I saw Waves of Laughter, an episode of BBC2 TV documentary series Funny Business. It was about comedians performing on cruise ships.

According to the BBC publicity blurb: “This film follows the fortunes of Jimmy O – a virgin water-borne comic, as he makes his very first cruise, and tries to learn the ropes in a hurry when he is thrown in at the deep end.”

He sank, so I was interested when he contacted me about a charity single his band Clown Prince are releasing for online download on 3rd May.

“I always say it’s sugar-coated pop with a twist of melancholy,” He told me yesterday. He was in Wigan. I was on Skype.

“Comedy happened by accident,” he said. “Me main passion in life were music. It’s a cliché, but I were the class clown at school. People were always telling me I were funny. So, when the band originally broke up and I had no creative outlet left, I never thought I’ll be a comedian, I just thought I’ll stand on stage to test just how funny I actually am.

“Me band’s doing stuff again now, but I thought we’d do it online rather than live. To test it. And we’ll give the proceeds to a local stroke charity in Wigan and Leigh – Think Ahead

“I lost me mum to a stroke two years ago, which is a harrowing experience. It puts a lot of this entertainment bullshit into perspective.”

“How are things after the BBC documentary?” I asked.

“I’m on the dole,” replied Jimmy. “I live in a council house in Wigan with no carpets, paper hanging off the wall, a broken fridge and a broken telly. I’m basically a tribesman. I wonder what Michael McIntyre’s doing this morning. He’ll be sat in his £8 million house.

“I have problems getting booked. 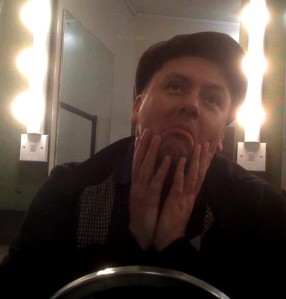 Jimmy O amid the glorious glitz and glamour of showbiz

“When I first started out, Jerry Sadowitz was me idol. When I ran a club, I’d love to have booked him, but he’s always telling me to Fuck off on Twitter. He was the first comedian I felt passionate about. But I grew up with the pre-conceived idea of a real professional comedian being Bernard Manning. I used to watch the show The Comedians on telly.

“I actually supported Bernard Manning once. I was quite lucky. When I started out and was only ten gigs old and I were shit, I got the chance to support Bernard Manning. After that, I thought I don’t understand this Political Correctness. It’s such a middle class bar.

“When I went onto the alternative Manchester circuit, I told a gag which got me blackballed effectively. I said:

“I’ve got a friend. He’s a Kosovan asylum-seeker. I invited him round our house and said Make yourself at home. So he raped me wife and ate the dog.

“I had another one:

“My girl said she wanted some smellies for Christmas, so I got her a tramp and a gypsy.

“But, as soon as I done that, I was known as ‘the racist’ and I was blackballed on the Manchester comedy scene and it’s kinda carried on. The vilification has carried on in the six years I’ve been doing stand-up. I’ve had promoters tell me We’ve had discussions. I’ve heard other promoters talk about you and because of ‘The Gypsy Joke’ you won’t get bookings. I have this reputation that precedes me.”

“Political correctness is an interestingly variable thing,” I said.

‘It’s a class thing,‘ said Jimmy. ‘If a middle class student had gone on stage and delivered that gag, it would be post-modern irony. If I go on stage – I look like a hod-carrier – I’m seen as a piece of racist BNP poster-boy filth.

“They’re just gags and it shouldn’t be that way. You shouldn’t have to police yourself. It’s comedy. Is it a George Carlin quote? It’s the job of the comedian to cross the line and offend. The nature of comedy is a dark art. It comes from a dark place. Most comedians are mental. The best ones are.

“I first saw Jerry Sadowitz on an ITV morning show called The Time, The Place when I was 15 years old. This episode was about swearing and they had Jerry Sadowitz and his manager sat in the audience. This is a clip from your show… and it was like Beep… beep… beep… beep… Being 15, I thought This is great! so I got me mum to buy me his Total Abuse DVD and I loved it. It was amazing! When I started doing comedy, he was the man I wanted to be like. That’s why I did asylum-seeker jokes. I thought: Well, he’s doing it…

“I grew up on a council estate in Wigan. I had a loving mother and a cold, distant, cruel father. He never beat me, but he was always putting me down so I’ve been instilled with this fucking Grimaldi complex – you know – the tortured clown. Most entertainers are dysfunctional to varying degrees and they stand on a stage to say Please like me.

“Other ‘normal’ people go out on a weekend and go for a dance and that’s their showtime. But the more twisted of us go stand on a stage and get shouted at.”

“And a TV documentary about cruise ship entertainers is a bigger stage,” I said.

“I’d been on television before,” Jimmy replied. “A show called Living With Kimberly Stewart: a reality TV show with Rod Stewart’s daughter on Living TV. Twelve contestants. The premise was Kimberly Stewart had no friends in the UK, so she had to find two flatmates to live with her. This was 2007 and Kimberley was in her late twenties.

“I fill out the application form and I’m brutally honest. I’m an unemployed comedian. I have a battered old Astra car. I live with me mother. I guess because I was raw and different, they invited me down to auditions at Endemol in London and it was full of girls who looked like they’d just come off an FHM shoot and guys in scarves and pointy-toed boots who looked like they’d been in Duran Duran and I’m a bloke from Wigan with a flat cap on and a pair of £7 jeans from Asda.

“There were tasks every week and, because I had been involved in music, there was a music task. Donny & Dirk Tourette were on the show doing the music task as well – Donny Tourette was on Celebrity Big Brother in 2007.

“The producer took us to the London School of Music. Donny & Dirk Tourette were sat down with loads of Stella beer cans round them. Having a comedic slant, if you’re in a strange situation, you tend to fall back on comedy. Dirk Tourette’s hair were bright blond, with a straight fringe and straight down the sides.

“And he said: You cunt! You Northern cunt! It were like something out of Grange Hill. He actually said: I’m gonna put your ‘ead dahn the toilet! There’s footage of the fight on YouTube, but they’ve edited all this bit out.

“So it started a push-and-pull. His brother Donny ran over with a full can of Stella and smashed it in me face – the footage is on YouTube.

“Donny Tourette scratched me eye. I had to go to Moorfields Eye Hospital. One of me regrets is I didn’t punch him; I just grappled him to the floor because, at the time I was green and thought Well, I don’t want to get thrown off this show. I thought it could be me ticket to the chocolate factory. But it turned out to be me ticket to the fucking meat counter in Tesco.”

“When I saw you on the BBC2 cruise ship show,” I said, “I thought He’s playing a professional Northerner on-and-off stage and I can’t see what the guy’s really like.”

“Well,” explained Jimmy, “I had a dichotomy that had been bothering me for a while. I had developed this dopey, Northern, Ken Goodwin type character. I’d shuffle onto the stage looking bewildered and get laughs.

“I had developed this act which was very old school: dead-pan one-liners. But I’d got bored with it and me delivery had become so slow and dragged-out… My goal now is to become more like myself on stage, but there’s something very scary about that. It’s like going on stage naked.

“People told me: You’re funnier as yourself. But it’s like when someone tells you something and, deep down inside, you know it too and you’re in a state of comedic denial.

“I’m not a cruise ship entertainer. I’m not from a world of cheesy smiles and Come on, Beryl, let’s have a dance; it’s Beryl’s birthday, everybody! Comedically, that’s not what I want to do. My goal is to be myself now. That BBC cruise ship documentary put the final nail into the coffin of my old act.”

There is an extract from the upcoming Jimmy O/Clown Prince charity single Cradle Me on SoundCloud: