How to become famous overnight on TV, according to magician Paul Daniels 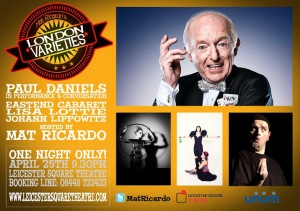 I went to see multi-talented Mat Ricardo’s monthly London Varieties at the Leicester Square Theatre last night – a show so good it could transfer straight to TV.

Every month, amid the hula-hoop acts, the cabaret singers, the juggling and the indescribably odd acts, Mat does a sit-down interview.

On previous shows, he talked in depth to Omid Djalili and Al Murray.

Last night it was magician Paul Daniels who told, among other things, how he got his first big break on British TV. People remember his Paul Daniels Magic Show which ran for 16 years on BBC TV, but his big break actually came on ITV.

Legendary Granada TV producer Johnnie Hamp followed the success of his series The Comedians (which intercut Northern club comics doing straight stand-up) with The Wheeltappers & Shunters Social Club – a series which recreated in the studio a Northern working men’s club with its whole gamut of variety acts.

The rule-of-thumb for acts on this show (and on television in general) was/is that they should run three minutes, but more was often recorded so that the producer/director could edit the best bits fast and tight.

Paul Daniels performed three magic tricks for the cameras but…

– During the first trick, he mentioned what would be in the second and third tricks.

– During the second trick, he referred back to the first trick and referred forward to the next trick.

– During the third trick, he mentioned the first two tricks.

Afterwards, Johnny Hamp came up to him and said: “I don’t know if you’re stupid or lucky… but I can’t edit that.”

As a result, instead of a 3-minute spot, Paul Daniels got a full 12 minutes on the networked peak time show.

The way Paul Daniels told it last night, he was invited back on the show and did fifteen minutes, becoming an overnight star.

Johnnie Hamp realised Paul was neither stupid nor lucky: he was very shrewd.

The extraordinarily good show I saw last night – the third of Mat Ricardo’s London Varieties’ monthly shows – will be on Vimeo in a couple of weeks. The two previous shows are already online HERE and HERE.

2 responses to “How to become famous overnight on TV, according to magician Paul Daniels”