Performance artist and comedian Martin Soan was richer than Her Majesty Queen Elizabeth II in one thing this year – birthdays.

Her Majesty has two birthdays every year – her real one and her official one.

This year, Martin Soan had three.

He had a birthday party last Monday. He had his actual birthday on Wednesday.

And yesterday he had another birthday party, coinciding with the Queen’s official birthday. 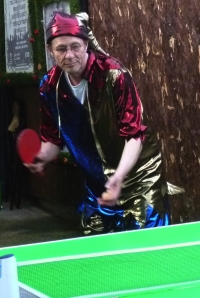 Martin decided to play ping-pong at home and then go down the pub and get pissed with his mates and neighbours.

Well into the evening, I had a chat with him. He is now 60 years old. He was wearing a jester’s outfit, given to him by fellow Greatest Show on Legs member Steve Bowditch. This was befitting as, the previous weekend, Martin had been created ‘official fool’ at the annual International Jesters’ Tournament at Muncaster Castle in the Lake District. He receives his annual salary in beer.

“Well, I have a spiritual stomach,” I replied. “Some people might call me Buddha-like.”

Martin pays homage to my pussy picture at Fleming Towers

“I have seen some of the pictures on your wall in your home, John,” persisted Martin, “and I would say you would have a spiritual side. But, a bit like Malcolm (Hardee, Martin’s deceased partner in the Greatest Show On Legs act), you are really reluctant to go to your spiritual side and talk to me and converse with me on a spiritual level. Exactly the same as Malcolm.

“Over all the years I knew him,” Martin explained, “I got Malcolm to talk about it twice. Now, you have some art on your wall that tells something about your spiritual side. Blog about that, John, blog about that.”

“I don’t remember the bloody names of them,” replied Martin. “You know the ones I’m talking about: the eye, the…”

“Well, there must be one with an eye,” said Martin. “I can’t remember them all.”

“Do you mean the cat with spectacles on?” I asked.

The barely-glimpsed ship about to enter a living room

“Yes! Ah! Yes!” said Martin. “The cat… The ship coming through the house… What’s his name?”

“Dominique Appia,” I said. “So what was Malcolm’s spiritual side?”

“Even though we were close all those years,” explained Martin, “and did all that stuff together, there were only a couple of times when he could actually say something to me, like Hello, mate. We done well, ‘aven’t we? He normally just went Oowwerwerwouer. A bit like you. You’re a bit Oowwerwerwouer.”

“I swear to God I’ve never gone Oowwerwerwouer in my life,” I told him.

“If people are close,” said Martin, “why not just embrace it? Malcolm had a tough time accepting that. Malcolm would go Oowwerwerwouer… So what do you say to that, John?”

“What was Malcolm’s spiritual side that you saw twice?” I asked. 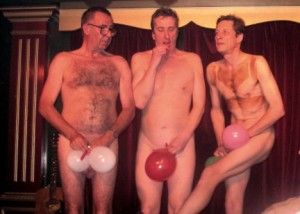 Martin told me: “That he actually did have a wonderful family side to him and he did actually love me but he could never express it and that he…”

“I can’t blog that,” I said. “People will misunderstand because it sounds gay.”

“Malcolm and me grew up together, we had loads of experiences together and, if I tell you them all, it just makes them sound petty, but we went through shit and we had a great time and there was a spiritual side to us that was like brothers. We were like brothers, but he would never admit to that.

“When we took acid or got stoned or something like that, he’d just go Oh no, I… No I just feel a bit off and… But a couple of times I got him off-guard and he said We did well, we did well.

“With Jim (comedian Boothby Graffoe) I can say Oh fuck, we did really well, man. We did that and We did that. I love you, guy – We did that! We did that together. We fucking did that! Malcolm would never say that and we did so much. He’d just go Oowwerwerwouer.”

“I can say that,” said Martin. “You’re blogging about me and I can say whatever I want to make my blog that you’re doing about me more interesting.”

“You’re interesting to begin with,” I replied.

Martin Soan says he is spiritual but is not interesting

“That bloke with one eye who killed two policewomen,” I said.

“So what’s your spiritual side, then?” I asked.

“My spiritual side,” said Martin, “is that I love rain, I like moss and I love mist… I did manage to take Malcolm on a little walk once and we did see that side. He did actually go Oh yeah, OK, that’s pretty cool… My spiritual side is all to do with getting out there and being in the wind and the rain.

“I loved today. I love today. It’s my birthday party, it rained and I loved it. Absolutely loved it. I loved the wetness… No, I don’t love the wet. I love the effort you have to put into protecting yourself against getting wet and cold. That’s what I love. I love sitting there and being cosy and looking at wet because I know I’ve protected myself. That’s really significant. Really significant. So tents… I love sitting in that tiny environment and I can control that tiny environment and remain dry. It’s an amazing feeling. I love being surrounded by weather and being cosy.

Martin Soan – a man who likes all things natural

“My glorious, absolutely top fave moment was when I went to the Welsh coastline with Vivienne (Martin’s wife) and it was raining and I had a tape of Keith Jarrett where it’s just him improvising on piano.

“It’s absolutely gorgeous: very classical and free, not just pinned-down by notes that you have to play, so he’s interpreting. And the rain was going against the window of the car and I put the tape on.

Martin Soan will be performing at the Edinburgh Fringe with The Greatest Show On Legs during The Increasingly Prestigious Malcolm Hardee Comedy Awards Show on 23rd August — and I will be talking to comedians in five shows at the Fringe – So It Goes – John Fleming’s Comedy Blog Chat Show, 19th-23rd August.