In yesterday’s blog about the World Egg Throwing Championships in Lincolnshire, there was a picture of Joel Hicks wearing black armour smashing an egg into his forehead. 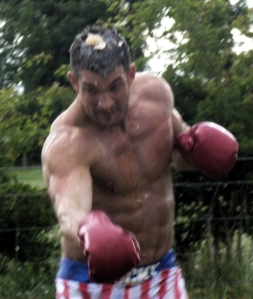 This could be because, last year, he was dressed as a boxer – wearing only gloves, shorts and boots and, as a target for egg-throwing, he was rather exposed. This year, allegedly as a tribute to the Japanese team at the event, he wore full Samurai warrior outfit and carried a sword. You paid to use him as a human target for egg throwing and got points for hitting him with an egg on the legs, on the head and in the groin. He was walking slower by the end of the day, but all the money went to charity. So it was worth it. For the charity.

“How did you become a human egg target?” I asked him on Sunday, while his face was still dripping with smashed eggs.

“It was in 2006,” he told me, “when I went to the World Bog-Snorkelling Championships in Wales just for a day out, something a bit different. I had a really good day and raised a few quid for charity. So I started thinking I wonder if there’s anything else out there?

“The next month I went down to London and took part in the Great Gorilla Run, raising money for the Diane Fossey Fund.’

“Dressed as a gorilla?”

“Of course,” said Joel matter-of-factly. “500 people dressed as gorillas running round the streets of London. And what started off as an idea of raising a few quid for charity by doing six charity events a year snowballed into doing 45 or 50 events a year – almost every weekend. Some events like this are a fixture and they invite you back and treat you well.

“There are probably half a dozen or ten events a year in the UK where I come along, do my thing and I’m part of the furniture there now.”

“After the TV coverage today,” I said, “you could end up a megastar in some village in Japan.”

“One can but hope,” said Joel.

“Like Prince Philip being worshipped as a god on some South Seas island,” I suggested.

“I didn’t come into it with any hopes or aspirations,” said Joel. “A lot of people ask Oh, was there some tragic event in your life that led you to do all these charity events? and the answer is No, not really. It’s just one of those things that happens. It’s great fun. A lot of people are working very hard out there to do a lot of good and, if you can give a little bit of support and a bit of your time to them…”

“Yes, that’s the day job that pays the bills,” said Joel. “I’ve been around the block a bit in terms of my career. I got a degree in bio-chemistry, been a primary school teacher, an officer in the Marines, a secondary school teacher, did a degree in Law and became a barrister for a while and then modelling came along and that’s what I do now.”

“Why did you become a barrister?” I asked.

“I was working in the accounts department of a construction company.” explained Joel, “Someone heard me arguing on the phone to a QC and they said: You ought to be a lawyer. So I said: Alright then. So I went off to university again to do a Law degree. It seemed like a good idea at the time.

“I finished the Law qualifications when I was about 28 and contemplated going into practice, but I couldn’t afford 3 or 4 years to sit there and do paralegal work and do the old school tie network – which I don’t have – to try and get a proper job. At that time, I was getting more and more work doing modelling so it seemed the sensible thing to go with that.”

“You just fell into male modelling?” I asked.

“A local photographer saw images of the Naked Run I do in Wales every year,” said Joel, “and they asked to shoot me for their portfolio.

“People who followed my calendar work said: Oh, you ought to do a calendar, which I did. Then a friend of mine in the modelling scene put my pictures on a few sites and that’s basically how it started.”

“I know you, of course,” I said, “as the highly esteemed World Gravy Wrestling Champion.”

“Last year, it was controversial to say the least,” said Joel. “There were things that went on behind the scenes that one could argue with, but…”

“It is,” agreed Joel. “We had Channel 5 come to video it and it just caused so much chaos. The TV companies come along and they think they can dominate an event and they just mess you around. They did their thing; Can we change this around? Can you do it this way?

“It was just after the London Olympics and I dressed up as Mo Farah, but I called myself Mo Fahrenheit because I was doing a fire-breathing act. The TV producer said: We don’t want you to black up. We think it could be construed as racist.

“I said: I don’t want to be the one to point this out to you, but Mo Farah is black. I can’t come as a white Mo Farah. At this point, I’d already stuck a black bald cap on top of my head and I was starting to black up my skin.

“They said: Don’t black up. We’ll do an interview with you now.

“They said: Well, leave it on. So there was this interview of me with a bald brown head top and a white face. I thought: Guys. This is just so wrong on so many levels. I can’t even begin to explain how pathetic this is.

“Then they rang up and said: Can you delay the prize-giving? We’re having a shower and something to eat.

“So I asked the organisers: How much did these guys pay to come and cover this event?…. £30 they said. 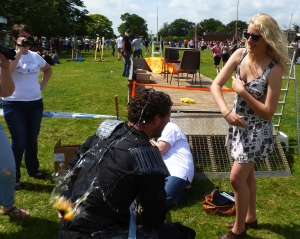 In egg throwing, women can be both a blessing and a curse…

“The old phrase Any publicity is good publicity is not true. You mustn’t undervalue your event by doing this.

“Andy Dunlop’s great with TV crews at The World Egg Throwing Championships. He knows how to make them happy without them interfering with what he’s organising.”

“So how are you going to get clean?” I asked.

“I get hosed down by a lady,” Joel said.

“You could have been a barrister instead of this,” I said. “But I think you made the right decision.”