Last night, I was at Vivienne & Martin Soan’s always odd comedy club Pull The Other One. Vivienne did part of her introductions in fluent German… of which I suspect we will hear more in the coming months.

As always, last night was a variety fan’s delight with Steve Aruni’s surreal act accompanied by a saxophone-playing vacuum cleaner, Lindsay Sharman in her persona of red-turbanned psychic advisor Madame Magenta (she should add even more songs to this character), Jody Kamali as a very-hands-on karmic Eastern healer, The Greatest Show on Legs searching for Dr Who amid stage smoke and Miles Jupp as the token stand-up comedian showing once again that, however successful he becomes, he is still vastly under-rated.

But, for me, the highlight of the evening was the second coming of The Silver Peevil, a successfully odd character ripped straight out of 1930s Hollywood Saturday morning adventure serials who is, he says, from Venus. I mentioned his first ever appearance in a blog two weeks ago.

After last night’s show, I was chatting to him. His Earth name is Ewan Wardrop.

He told me he was new to comedy and this was, indeed, only the second time he had ever performed the Silver Peevil act.

I was astonished because he was going on to me last night about being totally new to comedy – yet he was so self-assured (and so funny) on stage. The whole thing about being a newcomer did not gel. 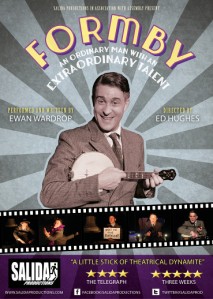 He said he had been a dancer and actor for about ten years. He told me he had performed at last year’s Edinburgh Fringe as George Formby in a one-man play he had written himself – Formby – I remember the show and had almost gone to see it, but it did not seem to fall within the Malcolm Hardee Comedy Award area and it got elbowed-out by other shows.

He had performed as George Formby at Pull The Other One earlier this year but I had missed that. And he is touring the UK in his Formby play this summer and autumn. There is a trailer on YouTube.

But there was something about Ewan Wardrop that threw me last night. He seemed more confident on stage than someone with the experience he hinted at. This turned out to be because he was rather over-modest.

I checked him out afterwards.

He has acted in London at the Old Vic and for the Royal Shakespeare Company at the National Theatre… He has also appeared in theatrical runs on Broadway and Los Angeles and in Tokyo.

And he is a founding member of The Bo Diddlers – an ‘experimental’ Morris dance group formed in 2008 for the Brighton Fringe Festival. featuring performers from the contemporary dance world. There is a showreel on YouTube:

Which brings me on to what is now-stand-up-character-comedian Ewan Wardrop’s most interesting angle.

He attended the Royal Ballet School (where Morris dance was bizarrely taught as part of the curriculum) and all the dancers in the Bo Diddlers worked for Matthew Bourne’s contemporary dance company New Adventures. Ewan played leading roles in Bourne’s very highly acclaimed productions of Swan Lake and Nutcracker!

Indeed, it turns out my eternally-un-named friend saw him perform in Nutcracker! at Sadler’s Wells in 2003.

If he were performing at the Edinburgh Fringe this year in a full-length show as The Silver Peevil, instead of touring the country as Formby, I might be very tempted to nominate him for a Malcolm Hardee Award for Comic Originality.

Instead, I suspect his visible talent will probably be spotted elsewhere and he will make lots of money… something that does not necessarily happen if you win a Malcolm Hardee Comedy Award – unless it is the ‘Act Most Likely To Make a Million Quid’ Award.

But there is definitely something unusual about Ewan Wardrop. Something which the late Malcolm Hardee and the very-much-alive Martin Soan were/are very good at spotting – genuine, original, mesmerising talent.

If you can’t see him as The Silver Peevil, see him in his self-penned biographical play Formby or – totally different – as George Formby singing modern rapper lyrics. There’s a clip on YouTube: