The annual T in The Park is Scotland’s equivalent of the Glastonbury music festival.

This year, the acts included Snoop Dogg, Paloma Faith, Killers, Mumford & Sons, The Proclaimers, Dizzee Rascal, Stereophonics, Travis and comedy performer Juliette Burton, who is staging a show at the Edinburgh Fringe titled When I Grow Up.

In it, she recounts how, this year, she tried to be all the things she dreamt of being when she was a child – including a baker, an artist, a Muppet and a pop star.

Performing yesterday at T in The Park was her “research” for being a rock star. She sang one song – Dreamers (When I Grow Up) – which is on sale for charity now and online as a music video later this week.

“Unusually,” she told me, “there was no rain. But it got so dusty I am still sneezing dried mud out of my nose. I thought I had got a tan but when I had a shower this morning I realised it was just dust.”

“I’ve been to Glastonbury a few times,” I said, “but never to T in The Park. It’s much the same I imagine?”

Juliette about to go on stage

“Well,” said Juliette, “there were the obligatory sightings of men and women peeing in public. That was expected. But there was an unusual fashion I hadn’t realised existed where young women wear hot pants cut so high that their bottoms hang out. I played ‘spot the arse’ which was a fun game. Sometimes it wasn’t bare cheeks I spotted but arses of a different kind – young men. I learned a lot about how to spot people on different types of recreational drugs.

“Then there were the tanked-up teens who decided to play volleyball in the middle of the crowd dressed as Monty Python-esque characters. There were some other excellent costumes around: the panto horse, the superheroes, the men dressed as bananas and a guy with a hoodie that just said CUNT on it. I was not sure whether he was advertising it or wanted to find some or he just wanted to let people know he was one.”

“So it was a different audience to the normal comedy show audience you’re used to?” I asked.

“Yes,” agreed Juliette. “Normally my audience keep their shirts on. There are usually far fewer nipples on display at a comedy show.”

“Were you more nervous?” I asked.

“I was trying to cope with the nerves by not thinking about it until it happened,” replied Juliette. “Which is a great coping strategy… until it happens. Before going on stage I was more of a bundle of nerves than I’ve been in a long while. I felt physically sick. I was worried I’d not be able to pogo in the shoes I’d chosen, worried I’d forget the words and worried about being bottled by the crowd.”

“So it was much scarier?” I asked. 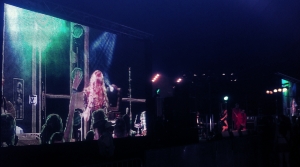 Juliette on screen and (tiny on the right) on stage yesterday

“Terrifying,” said Juliette. “My comedy isn’t stand-up exactly – and stand-up is terrifying for much the same reason as T in the Park was terrifying – the crowd. But a comedy crowd – especially during the Edinburgh Fringe – comes to see a show because they love comedy. They want to watch a show you’ve put your heart and soul into creating.

“The crowd at yesterday’s T in the Park gig was not there to appreciate the fact I wrote a pop song to realise my childhood dream of being a pop star. They were there for the beer. They were mainly men, already pissed and enjoying themselves.

“I’ve never taken drugs – because I’ve already had a psychosis and nowadays I like to get my highs from laughter. So some of the young men may have also been on something else. It was a music a music festival after all. I don’t know about that. But I do know they were loud and a little aggressive. And they just wanted more beer.

“Even the compere of the show said they were the toughest crowd they’d ever had and the crowd was terrifying because they weren’t listening. So seeing that crowd before I went on was absolutely the scariest thing. I mean, what if they bottled me? Or chucked pints of pee at me?”

Juliette had to fend off marriage proposals from front row

“Actually,” said Juliette, “it was frickin’ awesome. I owe a lot of that to the amazing comperes – Ben and Rufus. They introduced me in a way that meant the crowd (even that crowd) would warm to me – We want you to go crazy for this lady. Imagine she’s Rhianna and Beyoncé’s love child! – and they said they’d give free beer to my biggest fans…

“So, with that sort of introduction and bribery, I was lucky. Some of those guys, though, took the biggest fan thing really seriously. I got proposed to mid-song by two of the guys in the front row.

“I was told by the lovely team backstage that another thing in my favour was the fact most of the guys in the audience were ‘laaaaaads’ who, when they see a woman, just revert to Animal mode. And that’s Animal from The Muppets. They just end up shouting WOMAN! WOMAN! in their minds. The fact I wore a sparkly dress also meant they were distracted by something shiny.

“So lots of different tactics meant I didn’t get bottled. If they had been preparing pints of warm liquid excreted from their bodies especially for me, they kept them reserved for another band later on – maybe The Killers or David Guetta… I hope it was the latter because The Killers were fantastic.”

“I imagine,” replied Juliette, “that will be how it is for the first performance of my actual show at the Fringe in the Gilded Balloon – terror and then fun. That’s why performing is amazing – it’s real life. A mix of the best and the worst. Maybe the preview reviewers might get their nipples out too… I don’t know.

“After the show yesterday I was so high – on life, not whatever those guys in the front row had been taking. I wanted to do it all again. I don’t know… Maybe I will get the chance again one day.

Juliette foregrounded by either arms or legs

“Emotionally, my inner tweenager was overjoyed – I’d just realised a childhood ambition. All those days I had dreamed of singing a song to adoring fans, wearing a cool dress; all those days I had fantasised about it in my bedroom at home and drew little pictures of myself performing on stage – putting those pictures in a little homemade magazine inspired by such intellectual publications as Bliss magazine – I was NOT a cool little girl.

“And then finally, yesterday, I had realised that little uncool girl’s dream. It felt brilliant. But not as good as I imagine the first show at the Fringe will feel – That has been fewer years gestating but I think I care about it in the long term far more.”

“How does yesterday fit into your Fringe show?” I asked. 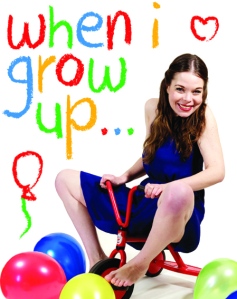 Juliette wants to recreate T in the Park orgasm

“The pop star section is at the end of the show,” explained Juliette, “and there will be proof of all that I’ve done in all this mad research on video and in photo form throughout the show on a Powerpoint. I don’t want to give too much away, but the pop star bit is a big climax of the show. Much like the orgasm I had walking off stage at T in the Park yesterday. It’s meant to be euphoric, life-affirming and uplifting.

“What did you think when you woke up this morning?” I asked.

“Did that really happen?” said Juliette. “Followed, right now as I’m talking to you, by thinking: Seriously – anything can happen. We can make anything happen if we want it to – and if we work hard enough for it.”

“Yes, some kind fellow performers filmed it for me. And I did a little introduction to camera afterwards to explain it. I’ll be editing that in the next day or two and get it online. And, if I can do a plug…”

“Anyone can buy the song I performed yesterday from iTunes, Spotify and Amazon – Just search for Dreamers (When I Grow Up).

“All the money raised until the end of the Fringe is going to Children in Need.

“As is all the money raised from auctioning off the When I Grow Up Dreambook – which is being signed by all kinds of exciting people – already including Janey Godley, Robin Ince, Stewart Lee and more. They’re all writing in it what they wanted to be as a child and what they do now. It will be on eBay during or just after the Fringe.”

“And when is the pop video you shot for the song – which I blogged about – going online?”

“That I think the Fringe might actually be a more restful time than this past week,” laughed Juliette. “And it would be a terrible waste of a life if we didn’t do something we at least enjoy, right?”

YOU CAN SEE A VIDEO OF JULIETTE’S PERFORMANCE HERE: