At the Edinburgh Fringe, Jimmy Savile show actor beaten up in the street after being named in Chortle website review

Juliette Burton (right) and her flash mob in the High Street

And, on my way to see Irish comic Christian Talbot’s late night comedy compilation show at the Phoenix venue, I heard one of those lines that only seems reasonable during the Edinburgh Fringe.

I bumped into Frank Sanazi in the street and, as we walked along, he told me: “She only does the gimp act on my show when Jesus Christ is not available.”

This is both bizarre and true: I myself have seen Jesus climax Frank Sanazi’s Dax Vegas Night II.

Other things which seemed perfectly normal yesterday were:

And Bob Slayer of Bob’s Bookshop explaining where he got his new chairs from. Bob is known for his high-profile criticisms of the Big Four venues in Edinburgh, including the Underbelly.

“I was in the Udderbelly’s Abbatoir last night,” Bob told me, “and Ed (co-owner of the Underbelly/Udderbelly) came up and said: So you’re Bob Slayer, who writes things about us!

“He said: Well, it does annoy me when you get your facts wrong.

“I gave him my card and said: Well, do correct me, because I would like to criticise you with the correct facts.

“We had a bit of a smile, a bit of a laugh and he said, as an aside, Well, if there’s anything I can help you with, just let me know.

And so to the beating…

At last year’s Edinburgh Fringe, I blogged about performer Ian Fox being randomly attacked in the street.

Three days ago, I mentioned in a blog that Scotsman journalist Claire Smith had been randomly attacked in Leith.

Yesterday, Ellis of comedy duo Ellis & Rose told me about being attacked in the street – but not randomly. He was with his comedy partner Richard Rose.

They are performing in two Fringe shows this year – their own show Ellis & Rose: Big in Denmark and (as actors) in Jimmy Savile: The Punch and Judy Show. 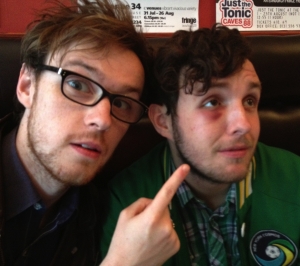 Richard Rose (left) with Ellis and his eye yesterday

“We went out for a few drinks last night,” told me. “We were walking down to Cowgate, near Bob’s Bookshop, at about two or three in the morning, a little bit drunk, and this guy walked past and asked us: Are you Ellis and Rose?”

“We were quite chuffed that someone had recognised us,” said Richard.

“He told us,” continued Ellis. “You’re sick! You’re sick in the head! and we reacted like What?? and he said You do that Jimmy Savile show, don’t you? We said Yeah and he said You’re fucking sick!”

Ellis continued: “I was saying to him But you haven’t seen it, have you? You haven’t seen the show. He was quite a big guy, Scottish accent, in his late-twenties.

“And then he just punched me in the face. I stumbled back a bit and then just ran.”

“To look on the bright side,” I said, “the good thing is that you were recognised in the street. That’s all most Fringe performers want.”

“This stuff wasn’t happening before we were named in the review,” said Ellis. 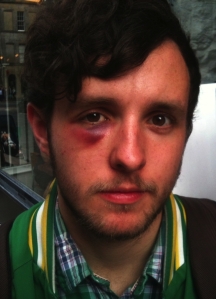 As I mentioned in my blog three days ago, Ellis and Rose (who did not write the Jimmy Savile show) had specifically asked reviewers not to name them but the Chortle review did.

“We initially didn’t want to be named,” explained Rose, “because we just didn’t want it to be confused with our own show.”

“I imagine if he’d see the actual Jimmy Savile show,” continued Ellis, “he would not have punched me.”

“Maybe we should sue Steve Bennett of Chortle,” mused Rose.

“This wasn’t happening before that Chortle review came out,” said Rose.

“Though it may increase our audiences,” said Ellis. “We are doing the Fringe properly… One star reviews; audiences love it; and I got punched in the street.”

“A couple of days ago, at the end of the Jimmy Savile show,” said Richard, “it had gone really well so we asked the audience: Would you like to hear a review of the show? And we read out Steve Bennett’s review to rapturous applause. They particularly liked the opening line This show is an insult…”

“Did you see stars when you were punched?” I asked Ellis.

“I only saw five stars,” he replied.