At the Edinburgh Fringe yesterday: nudity, farting and a hysterectomy

Today, my new temporary Edinburgh flatmate inventor mad John Ward arrives. He invents arguably useless or useful things like the bra warmer and the personal snow-making back pack. He also designed the physical trophies which are the increasingly prestigious Malcolm Hardee Awards. 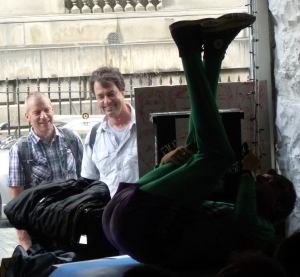 I will miss Mr Methane’s daily interesting facts which included not just surprising tales of touring with the semi-punk band the Macc Lads but also the fact that John Paul Jones – not the Led Zeppelin rock star but the 18th century US hero – led the only US attack on mainland Britain, by attacking Whitehaven in Cumbria and St Mary’s Isle near Kirkcudbright, Scotland, in 1778.

Mr Methane is very well-read for a man who farts professionally.

There is a distinctly literary lifestyle in my flat at the moment. 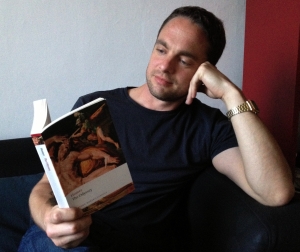 Also staying here is Neale Welch from London’s Comedy Cafe Theatre. His audio company Just The Greatest has put up some money to cover part of the costs of the Malcolm Hardee Awards (though not any of my personal expenses lest I appear to be benefitting personally). For this, he gets to sleep on a sofa that is shorter than he is. No-one said life is fair.

I came back unexpectedly yesterday afternoon to find him reading Homer’s Odyssey.

He told me he had discovered Edinburgh is a great place for second-hand bookshops and that he had walked into one shop and asked if they had a copy of The History of the Peloponnesian War by Thucydides.

The owner of the shop had replied:

“Would you want a copy of that book in Greek, Latin or English?”

And, sure enough, the shop did, indeed, have copies of The History of the Peloponnesian War in all three languages.

“Which one did you buy?” I asked Neale.

“The English language one,” he told me.

Frankly, I was saddened and rather disappointed in him.

Shortly afterwards, I bumped into Nick Awde at the Pleasance Dome, who started talking about Adrienne Truscott and her much-discussed show Adrienne Truscott’s Asking for It: A One-Lady Rape About Comedy Starring Her Pussy and Little Else! which she performs naked from the waist down.

This coming Friday, Adrienne is a guest on my Fringe show Aaaaaaaaaaaaarrghhh! So It Goes – John Fleming’s Comedy Blog Chat Show. She will be discussing the joys and pitfalls of performing nude on stage with Martin Soan of The Greatest Show On Legs, who created the Naked Balloon Dance.

And now it is impossible to get tickets for Adrienne’s show.

In theory, you can turn up and entry is free; you pay to get out. But all the £5 pay-in-advance-to-guarantee-a-seat tickets have been bought and there is no space left. So an extra show has been added – tomorrow night at 11.00pm.

She has also been nominated for a Total Theatre Award.

Total Theatre “celebrates and supports a wide spectrum of contemporary theatre and performance” but I suspect Adrienne may get nominated for some pure comedy awards too.

While I was chatting with Nick Awde, he told me he always reads my blogs from the bottom upwards because, he claims, I usually get to any ‘meaty bits’ at the end. So this next bit  is hidden in the middle to confuse him.

I had a chat with Canadian comic Tanyalee Davis, who performed her first Edinburgh Fringe show in 2003 and who was last heard of in this blog transporting critic Kate Copstick to her trial. Tanyalee is currently appearing on the Channel 4 hidden-camera TV series I’m Spazticus.

“I come over to the UK on alternate months,” she told me.

“I always come over in December and this last December I had a 7-week tour booked but, after a couple of days, I developed a blood clot in my groin and then it all just went tits-up from there.

“It started when I got back with a guy I was dating 18 years ago. We only dated for 2 years, then I was married to somebody else for 13. So we were back together again. I went back on birth control because I was in a new relationship, I got a blood clot and then that caused all these problems. But him and I are together still, thank goodness, ten months on.

“The blood clot led to three months of having eight blood transfusions and ended up with me losing my box – my cooch, my meat locker – I got about 16 different ways of saying fanny.

“I was in four different countries for the whole medical shebang. It started in the UK. I flew to America, then Canada, then I got cleared to fly on a family holiday in Mexico and then I started hemorrhaging. I got there Friday, I started bleeding Saturday, I was hemorrhaging Sunday, then I ended up having a hysterectomy the next week because they were like We don’t know  what to do with you… Too many blood transfusions and, because I had the blood clot, they couldn’t do surgery because I could have died on the operating table.

“So now it’s a comedy show and the interesting thing is trying to find the humour in… I mean, I nearly died… I had 8 blood transfusions and nearly died on a couple of occasions and making that funny is…”

“I always tell comedians,” I said to Tanyalee, “that, if anything goes wrong in your life, it’s not a tragedy, it’s the script for your next Edinburgh Fringe show. It’s God giving you a 60-minute show.”

“Yeah, I lost my box,” said Tanyalee, “but I gained a show. I’ve been wanting to do a new show for a couple of years – I haven’t done a solo show since 2007 – but I didn’t want to do straight stand-up. So, when this whole shit went down, I thought Boom! Now I got a show! – It’s Big Trouble in Little ‘Gina.”

“Are you as ambitious since you nearly died?” I asked. “Or has that changed your perspective? I remember sitting watching my father die and thinking: Nothing really matters. Only love and friendship.”

“Well,” said Tanyalee. “I just gotta enjoy my time while I’m here, because you never know when it’s gonna get yanked away from you. I have such a fun life normally, so being held up in the hospital and not being able to be on stage for three months… That was the worst thing.”

“Really?” I asked. “Not getting the applause?”

“No,” said Tanyalee. “It’s because it’s such an endorphin release and it’s therapy being on stage. I’m a raging bitch when I haven’t been on stage for a while.”

The Edinburgh Fringe is the largest arts festival in the world and Edinburgh – my favourite city in the world – has been called the Athens of the North. But it is also a tough wee town on the quiet.

As well as Fringe people getting beaten up in the street – I refer you to previous blogs both this year and last – it is the home of Trainspotting and (being Scotland) heavy drinking. I can say that as a shamefully teetotal Scots.

Last night, at around 1.30am in the morning, on my way to Arthur Smith’s legendary annual tour of the Royal Mile, I bumped into comedian Eric cycling home.

Arthur Smith’s tour of the Royal Mile was as bizarre as normal. NOTE: Arthur is on my first Fringe chat show tomorrow afternoon.

The tour involved occasional mass wailing by the group of about 30 people trailing down the Royal Mile with him. We were instructed by Arthur to do this in the fashion of North Koreans being told their leader had died.

There was also a shouted conversation with some people in the top storey flat of one of the buildings in the Royal Mile who played a Leonard Cohen song and threw plastic milk bottles out of their window… a £10 challenge for any man or woman to take their top off and sing the Proclaimers’ song 500 Miles… a demonstration of strange rickshaw driving… and a Lithuanian couple who were persuaded to sing in Lithuanian on the steps of St Giles Cathedral. It ended with Arthur disrobing and turning into a sparkly-costumed alien.

Among the crowd were comics Carey Marx, Phil Nichol and, recovering from a street attack in Leith, Scotsman journalist Clare Smith.

Afterwards, I walked to Bob’s Bookshop to see if Bob Slayer’s Midnight Mayhem was still in full swing. When I opened the door, I was confronted by a fully-dressed man standing face-to-face with Bob who was in his underpants. This is unusual. To see Bob wearing clothes.

Alas, I arrived a few minutes before 3.00am and, as soon as I arrived, Bob told the audience to shout “tonight’s catchphrase” at me and the show stopped. I have no idea what they shouted, but they seemed to be laughing as they shouted it. I would like to think the show stopped because my arrival climaxed the show. In fact, it was due to licensing laws.

I then walked home.

About two minutes later, on the other side of the road, three girls were walking along singing. One fell over.

As I got to my flat, on the opposite pavement, a man still holding a mobile phone to his ear was picking himself up off the ground.

Comedy, performance art, tragedy and people so pissed or drugged out of their heads that they fall over in the street.

One response to “At the Edinburgh Fringe yesterday: nudity, farting and a hysterectomy”