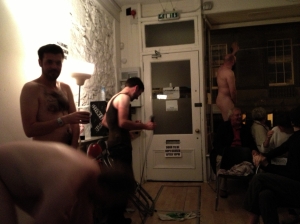 That was no deterrent to Bob Slayer though and he ended it as anyone who knows him would expect – with four naked comedians playing what I think is called “Willie Tag”.

Willie Tag is played in much the same way as the normal children’s game of Tag – the object is to touch another person who tries to evade you. The difference is that, in Willie Tag, you try to touch the other person with your penis.

What can I say?

I was as surprised as you.

All I can say is that the four naked comedians pursued the game with some vigour in-and-out of the audience and, shortly afterwards, the audience dispersed with a variety of looks on their faces.

But, as I say in the headline to this blog, Just when I thought the anarchic nature of the Fringe had peaked…

…there was another surprise.

On a wild whim yesterday, I sent an e-mail to Barry Ferns who, this year, won the Malcolm Hardee Cunning Stunt Award for publishing spoof versions of the Broadway Baby and Three Weeks review sheets, which included fake reviews praising his own Fringe show.

“I don’t suppose,” I wrote in my e-mail to Barry, “that by any stretch of a very stretched imagination this was you trying to get ahead on a Cunning Stunt for 2014?”

“Ha! I was adding random bogus stars to posters throughout this Edinburgh for my own amusement… It wasn’t a campaign as such. I just had some printed up… I didn’t think anyone had noticed.

“However, to add to the intrigue, I did not accredit any stars to Broadway Baby… They were just unmarked stars… So perhaps the search continues!… I quite like this element of bringing out your deductive skills around my comedy industry related seditious acts. Moriarty to your Holmes…”

Bob Slayer protects what little modesty he has

Barry warns me that he is planning an even bigger and more spectacular scam next year.

Who am I to dis anarchy?

I am leaving Edinburgh this afternoon with Bob Slayer in my car. He has not showered since Tuesday. It is an 8 hour journey to my home and another 45mins to his.

I have hopes of renting him to the Syrian government as a chemical weapon.