The extract I posted a couple of days ago from my Edinburgh Fringe chat show – about attitudes to rape – provoked quite a few comments. Three in particular struck me as particularly illuminating, The first was a Facebook comment from Adrienne Truscott who won the 2013 Malcolm Hardee Award for Comic Originality and the 2013 Fosters Comedy Awards panel award  for performing her show Asking for It: A One-Lady Rape About Comedy Starring Her Pussy and Little Else! She wrote: 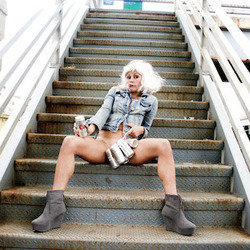 Even statistics about rape focus on women or the victims of the rape, when it would be much more productive to lessening rape by accruing statistics on rapists, and addressing that behavior, as that could actually be preventative.

There is rarely any other area of society, its ills or its triumphs, wherein men are not given full responsibility and credit for their behavior and its effects – the tradition of making women responsible for men’s sexuality is deeply historical.

I’m not saying only men rape. But, on the other hand, male victims are rarely accused of ‘asking for it’. The emphasis on this ‘asking for it’ discussion of how and why rape occurs belies a predisposition, as far as I can tell.

If women change their behavior accordingly – you know, started wearing ill-cut suits or figure-obscuring caftans, dowdy hairdos, no make up and tee-totalling – should we expect and rejoice in the sudden, brilliant absence of rape?

Another reaction to my blog, which had quoted three women taking part in my Edinburgh chat show, was this Facebook response:

Having had a daughter attacked by a moron when she was doing nothing more than walking home on a late December afternoon dressed appropriately (because apparently, according to my sisters above, a woman is responsible for being attacked if she wears anything less than full body armour) I am totally dismayed by both the garbage that has come out of their mouths and the fact that they are holding women accountable for the bad things that happen to them – I really hope that they never experience that stomach churning, leg collapsing, brain disintegrating moment when you are told your child has been seriously assaulted by some man!

I don’t think it is something that you ever ‘get over’ as it hits your inner core of belief in other human beings and in particular that we are innately good to each other. Worse things happen on a daily basis all over the world to women and children and of course men. But that doesn’t actually help, in the sense that this violence is an everyday occurrence everywhere.

The third response which interested me was this from comedian Leo Kearse:

I used to be a criminal intelligence analyst and we generally approached crimes looking at the victim, offender and location to see what could be done to each to reduce crime. Fine for most crimes but rape doesn’t work like that; you can’t analogise it to a laptop being left next to an open window.

In my opinion, it’s mainly caused by men’s attitudes.

I shared a car with two ‘lads’ a fortnight ago.

One of them was a total fanny: a city financier who kept banging on about all the deals he’d done and who gave me all this unsolicited advice about ‘branding’ myself as a comedian.

He then bragged about his sexual exploits and told us that, up until his early 20s, he and his mates would go to care homes (kids who are taken off their parents by the state end up in these homes) because “14 year old girls in these places are total sluts mate”.

What shocked me wasn’t just that he did all this; it’s that he felt that this was ‘cheeky lad’ behaviour and he could brag about it to a stranger even though he was bragging about being a member of a predatory nomadic paedophile gang.

I’m pretty sure this used to be something men would not brag about.

I told him he was a predatory paedophile like Jimmy Savile and then we didn’t speak to each other much.

I think it does reflect a common attitude otherwise he wouldn’t have felt like he could brag about it in front of me.

One response to ““Fourteen year old girls in these places are total sluts mate,” said the financier”