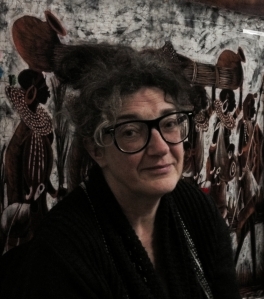 My blog two days ago told of comedy critic Kate Copstick’s recent visit to Kenya, where she has been running her Mama Biashara charity since 2008. As well as health care projects and workshops, it gives small grants and helps poor people (especially women) set up their own small businesses which may let them build a better life for themselves.

This time, her trip coincided with the terrorist attack on the Westgate Shopping Mall in Nairobi.

In the last blog, she told of being stopped by the police, having £800 stolen and the security forces’ crackdown during the terrorist attack.

“When I went back to Nairobi,” she told me, “the police were still rounding up all the wrong people with added GBH.

“Because of that, with my Mama Biashara helper Doris – she of the bottom that would have given Rubens wet dreams forever – we went to people’s houses and organised things in a more low-key way.

“One day we were at this house with five mixed groups of commercial sex workers and guys who had come out of prison. The businesses we set up with them are just fantastic. They hate their lives so much and want to change their lives so much that they grab these chances with both hands.

“We were in this rather nice compound and they were coming to us in five small groups, so it wasn’t one of the big groups.  We had dealt with three groups when there was all this hoo-ha outside. Doris went out, came back, closed the door and told me: Don’t go out!

“When I was finishing off with the third group, Doris came back and told me that the rancid old bitch of a landlady who owned the compound had called the police and the last two groups of sex workers and ex-cons had been on their knees in front of an armed policeman begging for their lives. They had done nothing.

“Doris had explained to the policeman why the two groups were there, the policeman had said Get out of here! and they’d all run off. The third group I was working with heard the word ‘policeman’ and ran off too.

“Doris and I went out and there was this foul old bitch staring at us. I asked her in Swahili: You think you’re a Christian?

“She screwed up her face and said in Swahili: I don’t want thieves and whores in my compound!

“I gave her the Copstick death stare, which usually works a treat, but she just death stared back. I wanted to say a lot of things I couldn’t say fast enough in Swahili, so I told her You have a bad heart and God will see your heart.

“Off the top of my head, I could not think of the Swahili for Burn in Hell, you rancid old git.

“Anyway, we left and started looking for other safer places to do workshops.

“I was going to do one up in Uthiru (NW of Nairobi), but the police were in Uthiru, so we went to Dagoretti Corner in Nairobi. There’s a lovely old lady with a cafe there and she doesn’t mind what I do provided I keep buying tea and mandazi for everybody.

“Doris brought the people from Uthiru to Dagoretti Corner and we were doing the workshops there. Starting good businesses. Great businesses.”

“So,” I asked, “at Dagoretti Corner, you were helping the same sort of people who wanted to get out of the life they were in?”

“Yes,” said Copstick. “Commercial sex workers – male and female – and ex-convicts. The ex-cons were all married guys with kids and it’s a big, big thing for them to have another chance.

“They get put in prison for things like looking the wrong way at a policeman and, once you’re in the prison system in Kenya, if you haven’t got someone who can bribe someone else to let you out, you just stay there. You can end up doing six months in prison for nothing – just cos people have forgotten about you. When you come out, employers ask where you’ve been and, if you say In prison, obviously, they say No job.

One rather glamorised view of Dagoretti Corner in Nairobi

“We had done a lot of funding with these people at Dagoretti Corner and then Doris started to get phone calls. There was a guy sitting there who wanted to sell quails and quails’ eggs as a business and Doris suddenly said Right. We’re finished now. We’re packing up.

“As most people realise, I am insensitive and didn’t catch the note of outright panic in her voice.

“She told me: There are men outside.

“We need to go, she said. What are you doing?

“I’m just texting my dad, to tell him everything’s OK and I’m fine.

“You are NOT OK and everything is NOT fine! Doris told me. There are armed men outside.

“The phone calls had been to tell her there was a gang of six guys outside. One was at the chemist shop opposite, keeping an eye on where we were sitting… and then there were three others spread out… and two with guns waiting for us to come out of the doorway of the little cafe.

“No, it won’t be fine, said Doris, because they’ll know there’s only us in here and they don’t care if they kill the shosho (the old lady). They’ll kill everybody. They’ll just shoot everybody as long as they get the money and then run off.

“So we phoned one of Doris’ friends who borrowed a car, drove it up to the entrance and we ducked down, got in and roared off. It was unreal. I wasn’t scared, because it was so unreal, but I knew I should have been scared because Doris was shaking like a leaf and Doris is one kick-ass woman – and she has a lot of ass to kick.

“So that was the armed would-be hold-up and then, because we now knew there were armed men roaming Dagoretti Corner with a view to attacking and robbing me, we decided to avoid it.

The perceived safe haven of Nakumatt Junction in Nairobi

“That whole area was obviously a bit suspect, so we decided to meet down at Nakumatt Junction – Nakumatt is their biggest chain of quite posh supermarkets.