Free Fringe in Edinburgh to be ended? 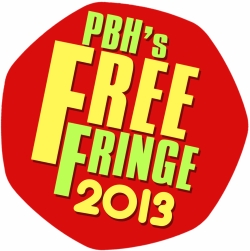 Could this have been a last Edinburgh Free Fringe?

It is a current cliché that British comedy is under threat at a grass roots level.

Comedy clubs are closing across the country.

One cause seems to be that (as started happening at the Edinburgh Fringe several years ago) people are spending their money in large amounts on recognisable Big Name acts in bigger venues and not seeing unknown acts in smaller venues.

There are, however, two balancing factors.

Possibly more about this in tomorrow’s blog.

The other interesting factor is the rise of ‘free’ shows which are, in effect, indoor busking: you do not pay in advance; you pay whatever you want (or nothing) having seen the show.

The Free Fringe was started in Edinburgh by Peter Buckley Hill and spawned the Free Festival (which, depending on your viewpoint, is either a competitor of or complementary to the Free Fringe)… Then, this year, Bob Slayer’s ‘Pay What You Want’ shows started within the Free Festival. These followed the same ‘pay-on-exit’ model, but also allowed you to buy tickets in advance which guarantee a seat. I understand other promoters are looking at using the same model at next year’s Edinburgh Fringe.

Lewis Schaffer has been performing regular twice-a-week (sometimes even more) comedy shows in London since 2009 and has, this year, also been performing a successful weekly ‘pay’ show in London. – well, it keeps getting extended, so it must be successful although Lewis Schaffer eschews success. He has also successfully toured his Free Until Famous show around several English arts centres as a free-to-enter show. And, last night, I went to Nelly Scott/Zuma Puma’s weekly Lost Cabaret club in Stockwell, which is one of several venues running the free model.

Again, possibly more about this in tomorrow’s blog.

This week, though, there has been some trouble in paradise and aggro in the ‘free comedy’ movement.

Five of the PBH Free Fringe’s regular performers wrote a letter to PBH – Peter Buckley Hill – saying, among other things:

We wanted to express our increasing concern about the workload that an expanding free fringe is placing on your shoulders.  Many times you have expressed the desire to step aside and allow the team to take over more responsibility leaving you more time to perform and enjoy the fringe.  Plus, it is no longer feasible to continue without a contingency plan in place should you for any reason be unable to take your customary leading role in the Fringe. Crucially, so much knowledge and information resides with you alone that a failure to disseminate this more widely and plan for your potential absence would in all likelihood lead to the whole organisation fragmenting.

I am not going to be pushed aside to become a figurehead.  There will be no committee except of people who have proven themselves by undertaking a major responsibility and seeing it through to the end, such as the section Artistic Directors.  There was a proto-committee in 2012/13.  It collapsed and I had to pick up the work myself.  You don’t get to set policy until you have proved your worthiness by doing a job.

Rather than have people trying to take over and change the principles, I will cancel the whole event and wind up the Free Fringe Ltd.  Anybody attempting to start their own organisation will do so from scratch, with their own money, as I had to all those years ago.  You can’t use my name or initials without my consent. The logo belongs to The Free Fringe Ltd, as does all the PA and all the money in the bank.

I presume the people behind this ultimatum will now want to form their own organisation and start charging for membership so they can pay themselves for their own work, just as they propose in the ultimatum.  And in order to do that they’ll capture as many Free Fringe venues as they can.

If I consider it worthwhile, I may decide to continue the Free Fringe with the venues that are left to us.  But I do not have to.  I have put in more money, time and stress than the signatories of this ultimatum can imagine. They’ve never organised the Free Fringe and don’t know the details, and yet they already think they can do it better.  I’ll carry on if there’s support for the real principles of the Free Fringe. Venues may be difficult, as I already said they would be.  If there is insufficient support, then I shall wind the Company up.

I have written a brief paper detailing the things that must not happen to the Free Fringe, and attach it.  If any of these things happen, they would change the whole principle of the Free Fringe. Therefore they will not, no matter how many people think otherwise.

Some things about the Free Fringe ethos are negotiable; some are not.

What are the things that must not happen?

– No payments to venues

– No charges to performers

– All performers to contribute to the collective according to their abilities.

This list is not exhaustive. It merely represents the difference between slight negotiable changes and fundamental changes. The Free Fringe may evolve, but if it violates these principles it might as well die.

13 responses to “Free Fringe in Edinburgh to be ended?”