I know it is difficult to believe but, occasionally, interesting things happening which never quite make it into my blog. 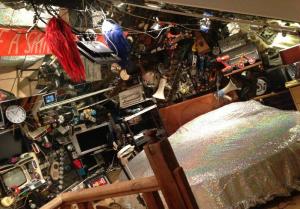 After about four years of not being available on the date, I managed last night to go along briefly to one of comedian Phil Zimmerman’s legendary annual parties. It was a cross between a mini-Glastonbury Festival and visiting a post-Apocalyptic version of GCHQ or the NSA, with CCTV all over the place.

During one previous year’s event – in 2011 – an irate neighbour started shooting at participants with an air rifle from a nearby window, causing mass panic in the back garden. When the police arrived, officers apparently spent some considerable time crawling around the garden looking for evidence in the form of pellets

This year, at the door of Phil’s ordinary (sic) suburban house in Ealing, one sign said (including mis-spellings): 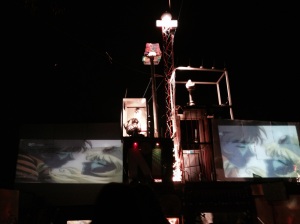 SMILE YOUR ON TELLY!

If you can see this sign you’ve been caught on camera & broadcast live on the internet as part of the TIME ON ACID street-interaction noise performance. More info; www.timeonacid.com

You are also now part of the world’s longest music video which will be entered for the Guiness book of records and Wikipedia – you too are part of history!

I first saw Phil Zimmerman perform at the late Malcolm Hardee’s comedy clubs in, I guess, the 1990s. Phil used to walk across the stage imitating the way that a pigeon walks – with that odd head-jerking movement. As far as I remember, that was pretty much his entire act. It was very enjoyable. Now he runs a monthly comedy club in Faversham and has a series of strange videos on YouTube, including this one:

I caught up with Phil’s annual party this week. but, during this last week, I have NOT shared several things with you.

This blog’s occasional Canadian correspondent Anna Smith sent me this from Vancouver:

Last night  a woman drove into four policemen who were dining at a window table at the Fatburger restaurant on Denman Street, three blocks from my apartment. I heard the commotion: sirens, traffic being redirected by plainclothes police, police supervisors speeding to the scene, ambulances driving slowly away… It was a good thing Matt Roper or Bob Slayer were not sleeping in the doorway. The police got broken bones… nobody died though.

Anna Smith at this week’s Canadian car crash in Vancouver

Anna is currently working in a bookstore. So she added:

The CBC TV crews were there at the Fatburger restaurant this morning interviewing the locals. They asked me if I would dare to eat on Denman in the future.  I am writing this on my phone at the bookstore which is very um, no computer, no cash register… the owner told me last week LOOK I have gone high tech… I have Post It notes now !!!

Bob Slayer as he likes to be seen – now in Sweden

The aforementioned Bob Slayer was also sending me text messages and e-mails this week. He is performing in Sweden and it is worth remembering that he became a comedian because, he says, he read the late Malcolm Hardee’s autobiography I Stole Freddie Mercury’s Birthday Cake.

Here are some of Bob’s messages to me this week (including Swedish mis-spelling):

Tonight in Linköping, I have been billed as SON OF MALCOLM HARDER, THE FAMOUS BALLOON DANCER… by a man who was once The Honey Monster. He should know better.

There is a lady here who was once X-rayed by my mum. Crikey!

Last night’s near death experience involved accidentally cycling onto a Swedish motorway on an old bone shaker of a bike with no lights. Turning back looked fraught so I hopped over the barrier and crossed some wasteland onto another road which unfortunately turned out to be a slip road for a busier bit of motorway flyover. Only one thing for it, push on! 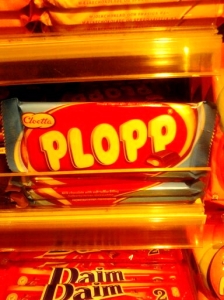 I eventually escaped down an unfinished slip road by climbing down a scaffolding tower (with the bike on my back) into a bus yard. The twenty minutes cycle home became a 2 hour adventure! I’m now in Linköping waiting for more adventures to happen…

I know you like chocolate, so here is the big discovery of my cultural mission to Sweden. (See picture)

Bob Slayer is a past winner of the highly-coveted Malcolm Hardee Award for Comic Originality.

This week I noticed a new Twitter account in the name of Oliver Moore who bills himself as:

Comedy with a smile. 5 times Malcolm Hardee Award nominee. Yet to win.

As far as I know, Oliver Moore is an entirely fictitious stand-up comedian.

So I can only assume this Twitter account is some early-started attempt to win next year’s highly-coveted Malcolm Hardee Cunning Stunt Award for best publicity stunt at the Edinburgh Fringe.

A reminder here that (real) comedian Gill Smith inspired the Cunning Stunt Award when she e-mailed me to say the purpose of her e-mail was to nominate herself for the Malcolm Hardee Award on the basis that, by doing so, she could legitimately put on her posters MALCOLM HARDEE AWARD NOMINEE because she had nominated herself. She added that she thought the late, great Malcolm would have approved.

I agreed that he would and we decided to give Gill the first Cunning Stunt Award on the basis that, if she did not give her an award, she would only give herself an award anyway but we would not get as much publicity.