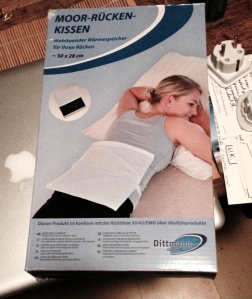 The perfect birthday present for a slipped disc man

Last night in Nuremberg, I slept on the floor because of my bad back: I was hit by a truck in was it 1990 or was it 1991? I can’t remember and can’t be bothered to check.

Rudiger, with whom I and my eternally-un-named friend are staying understands my problem. He had a slipped disc recently.

It was his birthday yesterday and one of the presents his mother gave him was a pad for his back containing, as far as I understand it, some soil from Dartmoor in England. The pad seems to be called a Moor-Rucken-Kissen. When I put that into Google Translate. it says that it is a Moor-jerking-cushion.

Multi-national life can be very complicated.

“You have to put it in a microwave or hot water and then you put it on your back,” Rudiger told me.

“But you don’t have a microwave,” my eternally-un-named friend pointed out. “It’s a heat thing?” 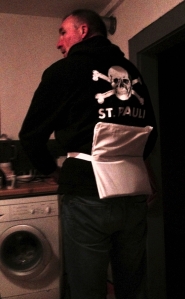 Rudiger with his back pack yesterday

“It’s a moor back compress,” I read out from the packet. “A pleasant heat source for your back… Helps to release neck tension. Long heat storage due to ‘ist’ whatever that means. Natural moor filling. Perfect fixation by means of individually-adjustable hook and loop fastener. Removable washable covering made from cotton and it’s from Dartmoor?”

“My sister told me it was,” replied Rudiger. “I do not know for certain. I hope so. It would make it more interesting.”

“How are you going to heat it up?” asked my eternally-un-named friend.

“You have to put it in a microwave,” said Rudiger.

“But you don’t have a microwave,” I said.

“I will have to use hot water,” said Rudiger.

Later in the day, we went to the Nazi Party rally ground on the edge of Nuremberg where Hitler showpieced the best of his Thousand Year Reich.

It looked smaller than it seemed on the newsreels and in the films but, apparently, the rallies comprised 200,000 people. 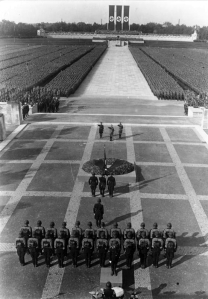 One of the Thousand Year Reich’s Nuremberg Rallies of 200,000 Nazis

The vast parade stands and outbuildings of the Thousand Year Reich’s iconic rally ground had started to crumble less than half a century after they were built. They were still crumbling. Reportedly it costs 100,000 Euros per year just to maintain the deteriorating structures and the local council is uncertain whether to keep maintaining them as historic monuments or to knock them down.

Afterwards, Rudiger told us that, once a year, in the 1930s, the Nazi Party would bring together top Nazi officials from all over the country for their own elite rally in the half-built Coliseum near the main rally ground. These vast annual meetings/rallies were filmed but took place only at night, never in the daylight. The reason was that most of the party elite looked far from the ideal of tall, thin, blonde demi-gods. Like Hitler, Goebbels, Himmler and other top Party people, they were often short and dark.

Tall Aryan troops in black uniforms and with blonde hair fronted the assembled masses for the cameras with torches flaring and, in the darkness behind them, were the Nazis.

The Nazis always had a good eye for visual composition and good theatrical events, though I have never heard of any comedy clubs.