Why do Germans laugh at an arguably tragic film about comic Lewis Schaffer?

Lewis Schaffer hides behind the Source Below door yesterday

What is happening to me?

Yesterday’s blog was about me failing to record a Skyped call with someone in Germany. I claimed a recording snafu had happened on only one other occasion. Then, last night in London, I buggered-up a recording of a post-Lewis Schaffer Soho solo show conversation.

This was the last of Lewis Schaffer’s Tuesday/Wednesday night Free Until Famous shows at Soho’s Source Below for 2013. He is back in January, after the venue allows space for Christmas parties, karaoke nights and the like.

We ended up after his show at a well-lit restaurant in London’s glamorous West End.

To be exact, upstairs at the Kentucky Fried Chicken just off Leicester Square.

The ‘We’ were Lewis Schaffer, two of his entourage – Heather Stevens and Alex Mason – and Marina Dulepina who was heavily involved in the production of director Jonathan Schwab’s short film titled Lewis Schaffer is Free Until Famous.

“In Britain,” Lewis Schaffer explained, “the film wasn’t considered a comedy. It was considered to be very serious here. But, when they showed it in Germany, they thought it was hysterically funny. The bits where British and American people are in tears over the plight of Lewis Schaffer’s tragic life, the Germans see as a moral victory of the oppressed worker over…”

“I dunno,” laughed Lewis Schaffer. “I’m making this up. But, in Germany, people did laugh at me.”

“Why is it considered a comedy in Germany?” I asked.

“That’s because she comes from Latvia,” explained Lewis Schaffer. “She comes from Russian parents and the Latvians are racist against the Russians because of forced colonisation after the War and…”

“The reasons the Germans liked it are…” said Lewis Schaffer. “Why was the film funny, Alex?”

After this point, although my iPhone claimed it was recording, it did not. 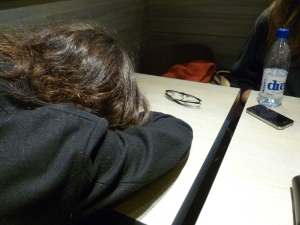 Entourage member Heather reacts to yet another Schafferism

Marina then explained that the original idea had been to make a film about a boxer.

I was not clear how this had changed into a film about a comedian, but thought it more interesting not to ask.

Then Lewis Schaffer talked about what people really thought of him and Heather buried her head in her arms.

It seems that Jonathan Schwab and Marina Dulepina had realised after first seeing Lewis Schaffer’s show that the more interesting film story was about Lewis Schaffer himself rather than about a stand-up comedian.

Lewis Schaffer was insistent – with some justification – that he is interesting because he is no different on-stage and off-stage and then talked about what people really think of him.

Heather buried her head in her arms on the table.

I left after about an hour, at which point Alex Mason was explaining to Lewis Schaffer how bitcoins are created. Marina Dulepina appeared to be about to nod off and Heather had her head buried in her arms on the table. Lewis Schaffer was admirably continuing to maintain his American accent. It’s amazing how he does it.

It is a pity I failed to record what was said. There was a good blog in there. 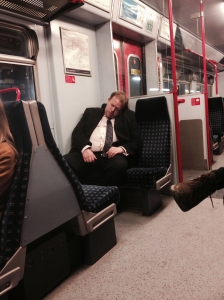 This man could snore for the United Kingdom

But, on the other hand, I would have had to transcribe it.

On my way home in the train, a large young man was fast asleep and snoring like an earth-boring machine tunnelling from Brownhills, in north Birmingham, to Alice Springs in Australia. Or possibly somewhere else.

Life is a trial.