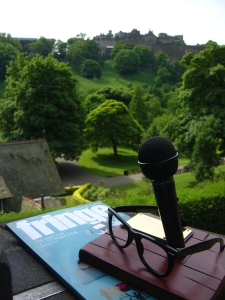 The Edinburgh Fringe takes place every August but never ends. It is only three months since this year’s Fringe finished and a whole nine months to the next one. But already performers are starting to obsess. It is like having a baby – right down to people having occasional morning sickness with a feeling of nausea in the pit of their stomach.

Fortunately, as a non-performer, I do not have to suffer any of this.

I have already booked a venue for the two-hour 2014 Malcolm Hardee Comedy Awards Show – on Friday 22nd August – and talked to a venue owner about doing a second year of chat shows in the lead-up to it.

“Can literally anything – ANY experience – be turned into a Fringe comedy show?”

“Yes,” I told her. “Janey Godley’s Good Godley! was the show everyone talked about in 2004. It was very funny and it told exactly the same story as her autobiography Handstands in The Dark which is so terrifying it reads like a novel by Edgar Allan Poe. In the book, the story is horrific; on stage, it was very funny without demeaning the story. But, then, Janey’s talent is that she doesn’t tell funny stories, she tells stories funny.

“And Juliette Burton’s Fringe show this year When I Grow Up had something unexpectedly shocking in it: you could almost hear people’s jaws dropping. It was a happy, uplifting show with a coup de théâtre in it.

“If you’re having really bad time with your boyfriend and the relationship is breaking up,” I said, “write it down. It’s cathartic and it could be turned into comedy gold in a couple of years, if not sooner.”

“Should I wait a week,” asked this would-be comic, “then I write it down so I can be objective about it?”

“No,” I advised her. “The last thing you want to do is write something objective. If something horrible happens, write it down straight away while the pain is still vivid. The writing-down of it distracts you a little from the pain and, when you look at it in 12 months time, you will find you’re objectively looking at something that seems like a stranger’s writing.”

“But you’re not a performer,” she pointed out. “What do you know about it?”

“Nothing,” I said, “but I can give bullshit advice plausibly.”

What you do not write is almost more important than what you do write. It is what you cut out that can give impact to what is left in. This is something known by the twice Malcolm Hardee Comedy Award nominee James Hamilton of comedy troupe Casual Violence.

Casual Violence – surely everybody wants to see their sitcoms

He Facebooked a message yesterday about a one-off London show in January called Casual Violence: Nobody Wants To Make Our Sitcoms (Work in Progress). The blurb goes:

Join us for a low-key, super-informal script readthrough of two new sitcom projects that we’re working on – one for radio, one not for radio, both just for our benefit. We just want a bit of feedback so we can make them ourselves, for you. We’d like you to be our script editors. Come along, listen to our stories, have a drink with us afterwards and tell us what you think. Entry: £3 (entry fee is just to help cover the costs of the venue).

I have told them I will come along if they pay me £3.05p because, in comedy, it is seldom the performers who make the real money. It is the peripheral hangers-on.

Although, with luck, the aforementioned Juliette Burton might be an exception.

She is a combination of English Rose and whirling Tasmanian Devil type character with show ideas and promotional ideas spinning around her like a Wizard of Oz tornado. I had tea with her yesterday afternoon and most of the conversation I cannot repeat.

“Well,” she replied, “as of today, it is confirmed that When I Grow Up is the first in a series of six live shows – and hopefully books and who knows what else? They will all be themed around identity – What makes a person? – The books depend on the interest I get from the proposal I have been asked to submit to a publishing company.”

“I am doing When I Grow Up at the Leicester Square Theatre in February,” she told me, “then touring it in Australia until May. There’s a new video promo for it.”

Juliette’s 2014 show Look At Me is going to be staged in association with the facial disfigurement charity Changing Faces, the body image charity B.O.D.Y. and the eating disorder charity B-eat.

Look At Me is billed as “a docu-comedy” (which is what When I Grow Up actually was) and, like When I Grow Up, will include video footage shot throughout the year – including interviews (the first is on 18th December) – and, in this case, the blurb goes:

By changing her appearance in dramatic (and hilarious) ways, Juliette will document how people react to her, how she feels and how she behaves. From wearing her glasses to being a man, from wearing a burka to dressing provocatively, from revisiting her “fat” self to being “old” and even going nude. Can we change who we are on the inside by changing who we appear to be on the outside? And is what we appear to be who we are?

I normally hate videos within live stage shows, but Juliette (a former BBC Radio journalist) showed with When I Grow Up this year that she can make it work smoothly and superbly.

Look At Me will also develop Juliette’s promotional blitz style with an accompanying pop song by Frankie Lowe, a pop video by Daniel Waterman, who directed her Dreamers (When I Grow Up) video, and who knows what else.

Juliette Burton seems to me to live a life of extremism.

With my chum Mr Methane, it’s a life of surrealism.

I got an e-mail from him last night.

Tomorrow, he returns to the Senkveld med Thomas og Harald (Late Night with Thomas and Harold) TV show on TV2 in Norway.

He is making a special guest appearance with Robbie Williams and recently retired Norwegian Prime Minister Jens Stoltenberg on the 10th anniversary edition of the show.

In fact, the show was pre-recorded on 22nd November in front of an audience of 8,000 at the Oslo Spektrum stadium.

Mr Methane tells me: “I had a brief chat with Robbie Williams as I came off stage and he went on – that’s right I was his warm up man. He said he had once gone to see me at a gig in Newcastle-under-Lyme in the early 1990s.

“Between us, me and Robbie had both ends covered on this gig. Although we both grew up not too far from one another and we both tread the boards, other similarities are not readily apparent. However I can now exclusively reveal that we both like oatcakes.

“Last weekend I went back to Norway again – this time to Kristiansand – where I did a 25th birthday gig for the Norwegian importer of Umbro sportswear.”

“The Norwegian boss wanted me to wear Umbro sportswear until I explained that I came from Macclesfield where the Humphrey Brothers of Wilmslow set up their first Umbro factory. (The name UMBRO apparently obscurely comes from the words hUMphrey BROthers.)

Methane’s mate’s mum made his costume

“My mate’s mum, who made my Mr Methane costume, was an Umbro seamstress so I told the Norwegian boss that, technically, I was already wearing Umbro kit.

“He was delighted, but that didn’t stop a rather drunken member of the audience slamming the birthday cake candles into my bottom, burning my arse and rather spoiling the big moment. I don’t know if he did it on purpose or just fell over because he was so drunk.

“But that’s Northern Europe for you: long cold winter nights and large amounts of booze.

“The next day, I got food poisoning at breakfast and had a rough journey home. I am now finally getting back on track. It is a big relief as I am on my last pair of pyjamas.”