A cage fight, a slap on the buttocks, a silent woman and a trip to Guatemala

Sober Dan March at his party

Last night, I had the choice of paying £35 for a VIP ticket or £25 for a standard ticket to see a cage fight arranged by self-proclaimed ex-gangster Dodgy Dave Courtney in his back garden in South East London or go to comic performer Dan March’s 40th birthday party at the Looking Glass Cocktail Club near trendy Shoreditch (£8 for a double vodka and orange).

It was a tough call but I am glad I went to Shoreditch, though I was unclear if getting into the back room through the looking glass door always entailed getting your buttock slapped with a riding crop or if this was a special addition for the occasion. 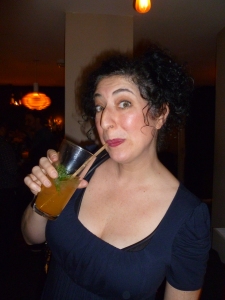 Lheila Oberman could not talk to me last night

I am glad I went because I bumped into comedy performer Lheila Oberman whom I have not seen in years. She used to perform as 50% of the late and very-much-lamented Aliens Ate My Schnitzel duo.

Alas she could not tell me about this nor anything else much, because she had totally lost her voice. When I asked how long she had lost her voice, I think she told me it was two weeks because she held two fingers up. We partly conversed through her friend Tim Eagle, a very successful clown, who looked a lot like Jerry Springer and told me people kept saying he looked very like the recently deceased Lou Reed.

I returned home later to a message from this blog’s occasional Canadian correspondent Anna Smith, who is currently working in a Vancouver bookshop. In its entirety, her email read:

Anna Smith in Vancouver has an untold story of Guatemala

My sister went to Guatemala. The result was three children (now grown) and then she became an Anglican priest !

I asked for more details.

This morning, I awoke to emails with more details, but of Vancouver not Guatemala. The multiple emails read:

A guy who was in the bookshop two weeks ago strode in, eyes gleaming. He asked: “Has that chunky guy been round here much?” I had no idea who he meant.

Literary culture in a bookshop in Vancouver (Photograph by Anna Smith)

They’re making a movie at Macleods Books, down the street. Jenn, who usually works inside Macleods, was standing at the corner, eyes on the door. Her job was to extract the book hounds who wandered into the store oblivious of it being used for a film set, despite the grips rushing about taking measurements and the ladders and floodlights everywhere.

I had sold a couple of architecture books to the movie’s art director a few days earlier and witnessed my boss dismiss a location scout from a different film, possibly Fifty Shades of Grey. My boss was annoyed:

“Are you holding a contest?” he asked. “Because I don’t want my store involved in one of your contests.”

“But it’s my job” said the location scout. We have to go to several potential sites, take photos and let the director choose. It’s not my decision.“

A short, slight man rushed in and proffered a shopping bag with a thin wooden box inside. “Are you looking for some gold flatware?” he asked. I told him, “No,” and he immediately hurried out.

Across the street, the Marble Arch Hotel is clad in scaffolding and blue veiling. Three mentally ill drug addicts (two men and a woman) have been living there but are now locked out of the building. Yesterday, they pounded on the temporary plywood door and shouted in all directions, indignant and plaintive: “Would someone unlock the door to our OWN home !!!”

Chunky workmen seen from the bookshop (Photograph by Anna Smith)

A tall, good looking young construction worker walked into the shop today. He told me they are stripping the lead paint from the Marble Arch building. I must have looked alarmed, because he added: “Don’t worry, it’s not the bad kind of lead”. He asked for a book from the window display – How To Pick Up Women.

I still know no more about why Anna’s sister’s visit to Guatemala resulted in three children and her becoming an Anglican priest.

I live in hope of more details and that Lheila Oberman will speak to me again.