The best comedy compère I have seen

Yesterday, I wrote a blog complaining about some comedy club compères who namecheck the next comic on-stage after encouraging a rising tide of applause, with the result that the name is inaudible under the final crescendo of noise. I also suggested that comics should end their act by namechecking themselves to the audience.

I thought one of the more interesting responses to my blog came from Raymond of the comedy act Raymond and Mr Timpkins. He commented:

“It seems common sense to structure the introduction so the act’s name is audible but, in reality, no-one will remember the act’s name anyway wherever it’s said. More important is the attitude from some promoters that the least experienced act will do as compère where in fact, at its best, it is a specialist role that really sticks the night together. Being funny enough to get the audience’s attention though disciplined enough to not take too much out of them – because that laughter is for the acts – is a rare talent especially in the world of inflated egos comics inhabit. A good compère is like a good goalie: no glory but takes a hell of a battering for the team. I say Hurrah for the good compère. Let’s appreciate them more and criticise less!”

Daphna Baram: “Out-doing comedians is not a good thing”

Daphna Baram, who compères at several clubs, suggested to me yesterday: “A good compère can not make a night sparkle if the comics are all bombing, nor is he or she likely to completely destroy a gig that is going well otherwise, but they are holding the steering wheel of the gig, and they can make it hard or easy for the next comedian on the bill.

“Ivor Dembina once told me that the compère’s only job is to be liked and make the audience feel they are in the good hands of someone who knows what he/she is doing. I tend to agree.

“It is also the MC’s job to keep the atmosphere in the room on the up so, if an act bombs, you need to tell a few jokes and get the laughter back into the room. If an act was just offensive or aggressive towards a member of the audience, it is your job to calm things down, to bring the friendly and hospitable atmosphere back into the room. If the audience was heckling or breaking the unwritten rules, it is the MC’s job to deal with it. In short, it is a pretty thankless job because, despite all this, the MC needs to aspire to be not too memorable and avoid being the funniest person in the room. Out-doing the comedians is not a good thing for a compère to do.”

It is maybe worth remembering that the French word compère can translate as ‘accomplice’ and com-père or comme-père comes from the medieval Latin ‘com-pater’… together-with-father. In Latin, it can also mean ‘gossip’. So there is an element of amiable paternal (or maternal) chatting in the origin of the word.

The late, iconic club owner Malcolm Hardee was always, I thought, much-under-rated for his compèring skills. If the final act of the evening had stormed it, Malcolm would come on stage, say: “Oy! Oy! That’s it! See you next week!” and get off immediately.

If the final act had gone badly, he would spend up to twenty minutes (I saw him do it once) getting the audience back ‘on-side’ so that they left happy, content, fulfilled and feeling they had had a good night out.

On the other hand, he often used to introduce performers new to his audiences by saying: “Here’s the next act, (INSERT NAME OF ACT) Might be good. Might be shit. Dunno.”

I suggested to Raymond of Raymond and Mr Timpkins that his act was probably one of the few that Malcolm did not introduce in this way. 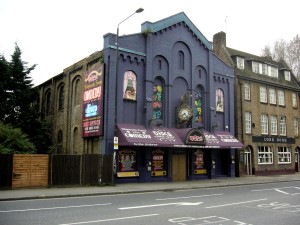 Malcolm Hardee’s Up The Creek club in Greenwich, in 2009

“Oh he so did, “Raymond told me yesterday. “When we did our first ever open spot in London at his Up the Creek club, he introduced us in his usual style and Mr Timpkins used as our opening line Good evening ladies and gentlemen. We are shit – to get in first with the punters, who in those days were terrifying.

“We got away with it and we kept that line in our act. Malcolm came from the time before career comics, suits and any concept of comedy as a business. He was the real alternative, a naturally funny man. His funeral was one of the funniest and saddest things I’ve ever experienced. Like the speciality acts he always encouraged to perform, there are few, if any like him left in comedy. Shame.”

His name? It is Lewis Schaffer

I have seen many excellent stand-up comedians do a shit job compèring shows, because, as Raymond says, it is a specialist role that needs careful handling – not just spewing out chunks of your stage act.

David Mulholland, house compère at Soho Comedy Club told me yesterday: “If a compère does more than 5 minutes – 10 minutes max – of stand up material, it is either not going well or they’re a stage hog. Personal glory is not the role of the compère: it’s warming up the audience and making the night work as a cohesive whole.”

Probably the best compère I have ever seen is Scots comedienne Janey Godley, which is why she has compèred two of my annual Malcolm Hardee Comedy Awards Shows at the Edinburgh Fringe – and why she is (unless she gets an offer that pays a shitload of money) going to compère next year’s Awards show (with Miss Behave).

Inevitably, Janey got in first with her wise words about compèring before I ever mentioned it. Six years ago, the comedy website Chortle published a piece by Janey headlined Compèring? – It’s War…

“A comedy MC,” she said, “is someone who holds the gig together… who sets the tone and gets the room ready for the big event. A funny fluffer, if you will – rubbing the audience into a height of comedy readiness, the foreplay of fun.

“The MC is not supposed to be the big hitter of jokes on the night… No MC worth their wages should eat the show, bask in the headlights or try to out-do the big name coming on; the MC is a scene setter – not scene stealer.

“The MC can also be the front line defence on the coal face of live comedy… Knowing that the comics are sitting watching the crowd, hoping you can educate them in the art of listening within ten minutes can be nerve racking but really rewarding when you get the heaving mob to sit back and relax.

“In the event of an aggressive rowdy audience, you are sent out as the scout. It’s your impression on them and your consequential conquering of the ensuing enemy that will secure the safe passage of the acts that grace the stage. 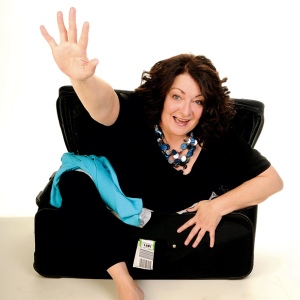 “Being defensive and shouty doesn’t always work; it can serve to aggrieve the men who are not used to a woman speaking out loudly. Though a good funny put-down followed by some witty charm directed at the growlers usually works. I know this from my past life as a pub landlady. When a huge gang of antagonistic men descended on my bar, I always made it my point to find the ‘leader’ and recognise his management qualities.

“Men also assert themselves quicker when you relate to them as the female figure in their lives. Emotionally remind of them of their mother, sister or daughter and the mood can change… usually for the better. The same applies with mixed groups and females who seem to be getting out of hand.

“Mutual respect and acknowledgement of status can level most playing fields. Undermining people will always serve to fan the flames of anger.”

Wise words from a comedienne and comic who can play to and control any audience (literally) from the Glastonbury Festival to Jongleurs clubs and from nuns & priests to drunken football & rugby fans.

Now THAT is beyond compère.

One response to “The best comedy compère I have seen”