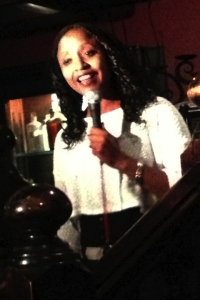 Njambi at Edinburgh Fringe in August

“She is a potentially major comedian. Njambi McGrath is one to watch,” wrote a highly respected, sexually attractive, hirsute and increasingly prestigious commentator on the UK comedy scene.

OK. It was me writing in my blog at this year’s Edinburgh Fringe.

Comedy fan Sandra Smith bet me yesterday that I would never be described as sexually attractive and hirsute.

Her website starts: “Njambi has been described as the hottest thing to come out of Africa since the Sahara.”

I think that female TV comedian is a tad unwise. 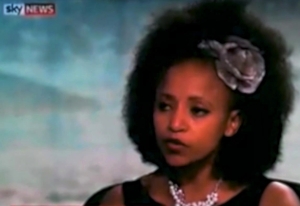 Njambi was profiled in the Guardian last Friday. She was interviewed on the BBC World Service’s Newsday yesterday. And she was voted one of the Top Five up-and-coming female comedians by – of all things – the Sun‘s Fabulous magazine.

Not bad for a Kenyan-born stand-up who only started in comedy three years ago after attending university in London and New York. She has a degree in IT.

“Who’s your publicist?” I asked when I talked to her yesterday.

“I haven’t got a publicist!” she laughed. “Up until now, no-one has been interested in doing any stuff on me; it’s only lately that my profile has started to go up a little bit.” 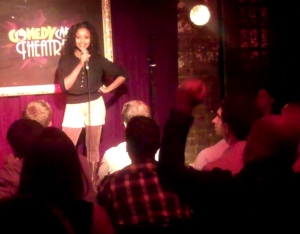 Njambi performing at the Comedy Cafe Theatre in London

“Why did you start in comedy?” I asked.

“I work in adult education – the National Childbirth Trust – and I wanted to engage my clients – my pupils – in what would be an unforgettable experience for them. I wrote a few jokes so that these people who expected to come in and learn about childbirth would start off by laughing and then I would talk about serious stuff and then they’d be laughing and then I’d talk about haemorrhaging in childbirth. I wanted them to learn in a refreshing way. And my husband said to me: Just go along to a comedy club and see what happens there.

“I went on stage – which was the hardest thing to do – and talked about things other than childbirth. My first routine was not a great success, which is to be expected, but I ended up being addicted to performing and I found I enjoyed writing and exploring ideas. 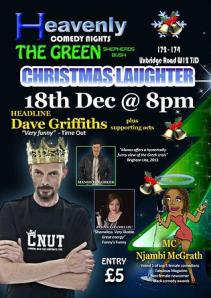 “I run a weekly comedy club – Heavenly Comedy – in Shepherd’s Bush where I can try out new material. And now I’m really looking forward to working on my 2014 Edinburgh show Njambi’s Bongolicious.”

“Being black is complicated,” I said, “because you don’t want to be pigeonholed as a ‘black’ comedian but, at the same time, it can be a selling point and you have to juggle those two things.” 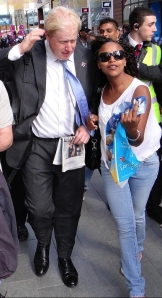 “Ye-e-e-s,” said Njambi warily. “I don’t want to get pigeonholed because I’m a more mainstream comedian. I’ve done a few urban (black London) gigs, but I try not to be too ethnic, just because that’s not the type of comedian I want to be.”

Njambi came to the UK in her early teens.

“Where were you born in Kenya?” I asked.

“Your parents are still in Kenya?”

“Yes. My father started off as an orphan – a street child – a parking boy. But he made it out of poverty, which is rare – especially for those parking boys, because they are dying in the streets. He worked very hard and eventually he bought a farm.

“When my parents split up I ended up living with my mother and I went from being financially OK to being not very OK financially, because most women in Africa, when the family breaks down, the man keeps everything and the woman has nothing.”

“And some – though not all – of your Bongolicious show will be about Africa?” I said.

“Yes,” said Njambi. “My poster is going to show me in a very glamorous dress, breast-feeding a monkey and I’m wearing a very big diamond that is bleeding. I wanted it to be as eye-catching as possible. I’m going to be confronting all the issues that people dare not talk about because maybe they haven’t been affected by any of these issues. Things like female genital mutilation, the invisibility of women in Africa… I want it to be on the edgy side and punchy but not so shocking that people don’t want to see it.”

“What do your parents think of you being a comic?” I asked.

“I’ve always been headstrong. They’ve always known about my determination… People ask why Kenyans are such fast runners and the answer is because we’re running away from things like hungry wildlife, neo-colonial legacies and people who are after your clitoris.”