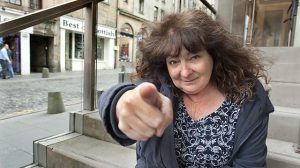 On Thursday, the first episode covered depression and, amongst others, featured my chum Scots comedienne Janey Godley performing and being interviewed.

This was interesting because her autobiography Handstands in the Dark is possibly the most horrific book I have ever read. Yet, despite what I see as a horrific life, she has not suffered from depression. In Thursday’s radio show, she said:

“Depression… I don’t understand it… Don’t I know the whole world has got depression? And here’s me with a daisy sunshine hat on telling everybody to shut up about their lost kite? Well, you know what? Thirty-three years of listening to somebody who was depressed and, before that, listening to my mammy who had psychoticness depression – I’m awfie bored with it.”

“The real mind fuck is that when I was depressed my therapist sent me to see Janey Godley. My therapist believed comedy was a valid treatment and advised me to go to the club where Janey was on. Best advice ever.”

“My mother was a schizophrenic savant who died of her illness when I was four. No-one told me she was dead. I had issues.”

I talked to Timothy yesterday about hearing Janey’s comedy routine on depression on the radio and previously seeing her on stage. He told me:

“My mother was Dux of her school and had a true photographic memory – not just a good memory but totally photographic (which is very rare).

“It must have seemed like a gift but, in her early twenties, symptoms of schizophrenia began and got gradually worse. She disappeared in January 1971 (as she had often done before) but this time she was struck by a vehicle and died of a brain injury two days later. She died with her wedding rings missing and 2p in her purse.

“When I saw Janey perform live on stage, I had a bigger belly laugh than I had had in years. She was doing her black Biro routine and I was in tears of laughter.

“I was not aware of Janey’s depression routine until I heard it yesterday but it put a chill down my spine as it exactly described the situation in my life where my depression was making life for the people I loved the most unbearable.

“You need to understand my state of mind when I went to see Janey. It was Autumn 2012 when my lovely, kind wife told me that she couldn’t take the angst any more and that she was leaving me. I realised that my depression was everyone’s depression – just as Janey said in her radio piece – and I was overwhelmed with remorse and sadness. I faced a future alone, without the woman I loved most in the whole world. I quickly spiralled into a full blown breakdown and spent the best part of two months crying. If a comedian had to choose their audience members, I do not think I would have been first on the list!

“My therapist sees comedy as a valid part of a wider treatment regime – in combination with mindfulness-based cognitive therapy and anti-depressants. Mindfulness is the art of staying present and paying attention on purpose to what is happening right now this minute. Anxiety and depression are often caused by regrets about the past or worries about the future so letting these thoughts go and being present is the goal of mindfulness. Watching good comedy puts you in a mindful state.

“She sent me to see Janey’s comedy show for two reasons. (1) She wanted me to laugh as I had spent two months crying and (2) She wanted me to see that it was possible – for no matter how short a period – to stop having remorseful thoughts about the past and to stop having doom-laden thoughts about the future. To do this, the comedian not only had to be funny, they had to grab my attention enough to keep me in the present, to keep me absorbed in their performance to the point where my mind was not wandering to past regrets and future anxieties.

Janey onstage in Glasgow at Children In Need Rocks Scotland

“That is why I was so glad Janey was on the bill that night. There were three or four other acts on that night, but I only remember Janey because her act was in the form of a story. And not just any story. It was a true story, which made it all the more absorbing. For 30 minutes, I laughed and I stayed present, I stayed mindful. I now knew I could do it. I could be mindful. I kept up with the therapy and dealt with my issues. My wife and I are reconciled and we are living together without the angst.

“Did Janey cure me? Clearly not. But being sent to see her was a stroke of genius and I am privileged to have had these two wonderful women cross my path in this bizarre journey through life.”

You can hear what Janey said on Feeling Kind Of Funny here.