I travelled with comedian Nick Revell from the UK to Leipzig in Germany yesterday. This blog’s occasional Canadian correspondent Anna Smith had told me I was lucky to have gone to Leipzig, Germany, not the one in Saskatchewan.

“You are better off in the German Leipzig than the Canadian Leipzig,” she told me, “as ours is a mere hamlet, where the only industries are drug and alcohol treatment centers although, on the other hand, these must be fertile grounds for comic material.”

I am here in Leipzig, Germany, to see Vivienne & Martin Soan’s’s first German version of their Pull The Other One club on Saturday night. The new one is billed as Comedy Confusion From London. 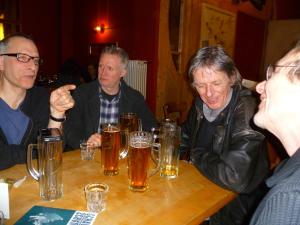 Much jollity was had last night with Martin, his wife Vivienne, Martin’s schoolfriend Steve and Steve’s friend Mick.

Mick had come over here to go to robot maker Jim Whiting’s club Bimbo Town. Alas, this closed last year and so Mick was thus more than a little vague as to why he was now here.

Last night, I recorded three extremely interesting stories for the blog today, got toothache overnight and woke up to find all three of the recordings (which I had watched recording) no longer existed. One of the mysteries of 21st century cyberspace.

But then, this morning, Martin, Vivienne and I had breakfast.

“Steve was a weekend hippy,” said Martin. “He admits he was. He used to come round to our commune in Colchester when I was a teenager. He saw what was happening – but from the outside.

“This bloke called Tom took over the hippy commune. Tom was probably around 27. He was incredibly handsome. Women went for him immediately. Old ladies used to be charmed by him. He ended up in Colchester from exactly the same East End (of London) streets as me. He was from Stratford; I was from Forest Gate.

“Tom got his girlfriend Maureen to seduce me when I was about 15 so he could recruit me into his ‘crime syndicate’, such as it was. He taught me how to shoplift, how to pick locks…”

“How to break into cigarette machines,” added Vivienne.

“Yeah,” said Martin. “How to use diversionary tactics to lean over shop counters and get stuff. He also used me as bait. He used to point men out to me in bars. I used to flirt with them and then walk out the back with them and he used to fleece ‘em – beat them up. I only did that a couple of times, to be honest. It wasn’t a regular thing.

“The first job he got me to do was to break into a dairy. He told me how to knock off the locks. All these milk floats were parked up and, in those days (when milk was delivered to your door in electric-powered ‘milk float’ vehicles) they used to have cigarettes in the back of the floats as well.

“So Tom chucked me over the wall, I went and smacked the locks off the back of the milk floats and I was so scared I just filled up my swag bags as quickly as I could with packets of Corn Flakes, jumped back over the wall, jumped in the car, got back to the squat and emptied all the Corn Flakes onto a table. Tom just looked at me and whacked me.”

“No,” said Martin. “I wasn’t proud of all this but, if I didn’t do it, he would beat me up. What he used to do that was frightening was – if I disappointed him or his temper flared up – he used to batter me and then, after be battered me, he used to cuddle me.

“It was very, very creepy indeed and it all built up to a confrontation where he held me and his girlfriend Maureen captive in my flat and he beat us up, just regularly beat us up over the period of a day and a half. He used one of her shoes – a stiletto, I always remember it – he kept on whacking us with this stiletto shoe.”

“He hit you all over the body?” I asked.

“He was one of the characters in my life before (comedian) Malcolm Hardee turned up. Two of the other characters were Waff and Taff. They may be in Leipzig tomorrow.”

“So there was Waff, Taff and Tom?” asked Vivienne.

“But,” said Vivienne, “Waff and Taff were not…”

“They were not violent,” said Martin. “They were hippies, but we used to all get up to…”

“So,” asked Vivienne, “were they all scared of Tom as well?”

“Yeah,” said Martin. “Everybody was scared of Tom.”

“So who rescued you from Tom in the end?” asked Vivienne.

“No-one. I ran away. I had to escape the squat because it was just getting mental. I’d already been in trouble with the law.”

“Is that when you were made a ward of court,” Vivienne asked, “for stealing the carpet from the doctor’s surgery?”

“The hippy commune just got out of control because of drugs?” I asked.

“No,” said Martin. “Because of Tom. It became violent. Poor old Tom.”

One response to “Comedy performer Martin Soan, aged 15, led into crime by a latter-day Fagin”