In yesterday’s blog, comedian Martin Soan told how he started committing crimes as a 15-year-old boy in an almost Oliver Twist & Fagin way.

Yesterday, he talked to me and his wife Vivienne about what happened in his childhood immediately before that.

“My parents won the football pools and moved out to Essex when I was, I suppose, 14. At 15, after about three weeks of being at my new school as ‘the new boy’ and just about to settle in and be OK, for some bizarre reason – on the way in to school – I went into a barber’s and asked him to shave all my hair off. This was pre-skinhead – at a time when everyone had long hair or wanted to have.

“So I go in to school bald as a coot. The teachers were saying things like We have yet another new boy and Our new boy has turned into a newer boy. Why the did I do that?”

“Your mother was not well pleased?” I asked.

“It wasn’t anything to do with that at all,” said Martin. “It’s just that I was mental… I was frightened”

“People shave their hair off if they’re unhappy,” I suggested.

“There’s something about cutting your hair off,” I said.

“No,” said Martin immediately, then corrected himself. “Well, it can be. It can be a statement: I’m going out there as a different person. But no. I was just mental.”

“On drugs mental?” I asked.

“No,” said Martin, “but pretty shortly after that, as a 15 year-old I attracted a lot of attention cos of my bald head and then my hair started growing again and I started hearing about tripping and drugs and knew the culture but had not experienced it.

“So I decided I was going to get involved in drugs and went to this notorious pub called The Headgate. I drank a pint and went out the back and someone gave me a joint which, of course, went straight to my head and I – this is the God’s honest truth – climbed up into a tree and vomited into the pub car park and then this little voice with an American accent piped up beside me: Take one of these. It’ll make you feel better.

“So I took this tablet and this guy said: Look, before you leave the tree, here’s this. Keep it on you. It was a piece of paper.

“I got down out of the tree and decided to go home, started walking along the street and the first thing I thought was Oh, I must be in a rich place now, because all the pavements have got these diamonds in them. And I walked all the way home, switched on the light and all the hairs on the carpet jumped up and danced around. He had given me acid after my first joint.

“So I spent the whole night up on my own and had the most brilliant time ever and became an adult overnight.

“In the morning, going through my pockets, I found this piece of paper with the guy’s name and number on. So I rang him up and said: That was fucking brilliant! That was the best thing I’ve ever done in my life!

“Come round, he said. So I went round and he said: Do you fancy doing a bit of work for me? So I started taking huge lumps of dope around places for him on my bike, aged 15, wearing my school blazer. 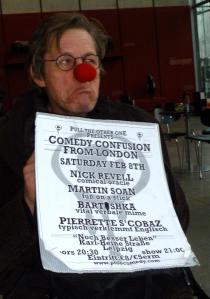 “After that, everything started moving very fast. He was great; he was really good to me. He was an American. He disappeared off the scene and I can’t remember his name.”

“So, in one way,” said Vivienne, “your parents winning the pools was…”

“Yes,” said Martin. “It was the worst thing that ever happened to me. Before that, I was at South West Ham Technical School in Canning Town and I was 3rd or 4th in Maths, 12th in Geography, 1st or 2nd in Art. I was doing well. But, when we moved to Colchester, I went down to the bottom.”