In Leipzig, a bizarre British comedy club succeeds and a Dresden voice impresses

Vivienne Soan even flyered the PTOO show to local statues

Pull The Other One’s brand of bizarre British comedy cabaret club seems to have transferred successfully to Germany on its first attempt. Last night, the doors opened at 8.30pm for their 9.00pm first show in Leipzig and, with pre-bookings and people turning up on the night, the house was totally full by 8.45pm and a large number of people had to be turned away.

On the bill were (in order of appearance) Vivienne and Martin Soan, Dickie Richards (one third of the Greatest Show On Legs), eye-opening Berlin cabaret act Bartuschka (who did her act partly in English), stand-up Nick Revell (who did his act partly in German) and Candy Gigi who successfully did her act on some other planet much to the open-mouthed appreciative shock of the local audience. 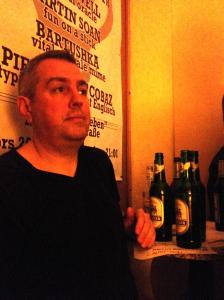 There was much talk before the show about whether the locals would 100% understand English, but this seemed to be no problem. And Dickie Richards (who is part Polish) resolved his artistic crisis of “Shall I start with How Poland started the Second World War or shall I do the fart material?” by choosing the latter. It was a successful choice, though I suspect Option 1 might have worked too.

That was last night.

I cannot speak nor read a word of German, so a 90 minute show mostly comprising chat was an interesting experience, mostly involving me listening carefully to the cadences of the words in the abstract. But, then, I used to enjoy listening to the abstract splendour of BBC Radio 4’s late-night Offshore Shipping Forecast and, in years long gone by, a BBC announcer reading the day’s Stock Market prices.

I am glad I went, though, because it meant I heard and saw Anna Maria Scholz perform.

I may not understand German words, but I know an astonishingly talented and varied voice when I hear one. Every song different and a showcase in itself.

Martin & Vivienne Soan’s Pull The Other One is set to return to Leipzig in April and, after that, with luck, the German version of their club will be monthly.

There is a 2012 video of Anna Maria Scholz on YouTube.