Comedian Njambi McGrath (pronounced Jambi McGrah) is thinking about writing a non-humorous book. Given that most of the UK publishing industry is currently running scared of anything not written by or about a famous TV name, I suggested she might make her idea into a comedy show at this year’s Edinburgh Fringe because that would encourage her to do the necessary additional research for the book and also potentially give the idea some publicity which might impress publishers.

As any regular reader of this blog knows, I have a particular bee in my bonnet about the fact that the best comedies are often about tragic situations.

“It was finding out about your parents which got you interested, wasn’t it?” I asked Njambi yesterday, while she was preparing for her weekly Heavenly Comedy Club in London’s Shepherd’s Bush. “You thought they were boring and had never done anything very interesting.”

“Then I found out my mum was 8 years old when they moved her to this camp in the mid-1950s. Her sisters were 13 and 14 and were considered grown-ups, so they were included in all the women who were going to dig the trenches.

“They would wake up at six o’clock in the morning and spend all day digging trenches. They were given no money and no food. So basically they relied on handouts. They were given flour by the Red Cross and made porridge.

“What the British would do was turn up at a village and burn it down and then the villagers would be herded onto lorries and taken to a patch of ground and they would sleep under the sky until they built their own houses and then they lived in these ‘special’ villages which had trenches round them to ‘protect’ them from the Mau Mau.

“They would start by building one person’s house and all sleep there and then they would build another house and do the same until they had built the whole village.

“The people in these ‘special’ villages were mostly women, because the men were taken to detention camps. The British assumed all the Kikuyu men were Mau Mau. The women had to dig trenches to surround the new villages and surround them with barbed wire and, when they finished that, they would work all day clearing the forests so the Mau Mau couldn’t hide there.”

“The Kikuyu tribe,” explained Njambi, “were basically farmers and we lived in the most fertile land in Kenya with bright red soils, so the British moved us away from there and put us into special reserves and taxed us – hut tax and poll tax – but we had no money. The Kikuyu used to make money from their land but they no longer had that, so they were forced to work for the white settlers, the majority of whom had come from South Africa and were very right wing.

“The conditions imposed on the Africans were that they had to pay these taxes and wear a big ID hanging round the neck – basically like a bull. They used to call it a ‘bull bell’. 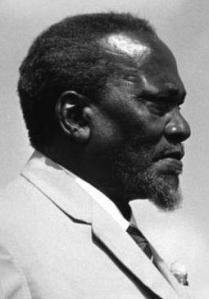 “People were very disgruntled and the Mau Mau were men like Jomo Kenyatta (later President of Kenya) who went to the British and said We’re not happy with our rights. We want land rights. They weren’t taken seriously, so a branch of them decided it was going to have to be armed resistance rather than talking.

“They were based in the forests and their tactics were to go and either kill a settler or to kill a sympathiser of the settlers, because the British had chiefs who were Africans and they were as cruel if not worse. So the Mau Mau would kill people and caused a lot of terror because nobody knew where they were. They were all Kikuyu men or the vast majority were.”

“Why were they called Mau Mau?” I asked.

“No-one knows for sure,” said Njambi. “They think it’s because ‘mzungu’ means ‘white man’ and it’s an abbreviation of that and ‘go home’.”

(One theory is that Mzungu Aende Ulaya, Mwafrika Apate Uhuru roughly means If the foreigner goes back to Europe, the African may get freedom)

“The women were put into villages separate from the men,” explained Njambi, “so they could give information about the men. Some of them, like my grandmother, were single mothers. She had no man, but they didn’t believe her. A single Kikuyu woman in Kenya was seen as a suspicious woman. People like that were tortured so they would give information about their husbands… but they had no husbands.

“The Mau Mau would come at night and harass the women in the special villages to give them food. But they had none. They were given flour by the British Red Cross. My mother ate flour from the age of 8 to 14. When they wanted to make it exciting, they put salt in the flour. Many of my mother’s friends died because they were mal-nourished. It was a double whammy for the women. They were harassed by the Mau Mau and by the British.

“If women did not co-operate or they were too weak to dig – if they were ill or injured from all the digging – they were assaulted to co-operate and coerced to work.

“The people persuading the women to co-operate were people like Idi Amin (later President of Uganda, but then in the British Army). His job was to coerce people into giving information about the rebels. He was promoted year on year on year because he brought in results. He found ways of making women talk. He found new ways of breaking women. The British re-defined rape, using bottles, broken glass, hot boiled eggs and barbed wire. It didn’t matter if you were 13 or 14. You were considered a woman.

“My mother stayed in the village from the age of 8 to 14. When I found that out, I knew why she was so poor as a child and why she didn’t want to talk about her childhood.

“My father was a different story. His mother was killed in one of the raids.”

“By the British or by the Mau Mau?” I asked.

“Nobody really knows,” said Njambi. “She was found dead with her baby son – my father – suckling on her breast. My father had an older sister who was 5 years old and they moved into the streets of Nairobi and she looked after him. She used to beg and my father lived in the streets until he met my mother.

“Because of all the years he lived in the streets, my father became very ingenious. He used to beg, get money, go buy sweets and sell them at the bus stop. Slowly, slowly, he made enough money to buy more stock and more stock. Eventually he met my mother in a train. She was 14 and she was going to look for a job. My father proposed on the train. They started working as  team. Every day selling sweets. He was living in a hut. He was no longer living on the streets. They worked hard and they earned enough money to buy a farm and they had children and they put us in good schools. I was put in a boarding school. Education was very important for my father. He was all about bettering himself. He bettered himself. He taught himself karate, became a black belt and represented the country. He spoke five languages. And, one day, I came home and told him: Mum, Dad, I’m in love with a British boy.

“I fell in love with a British boy. What can you do?”

“And you want to turn this story into a book,” I said.

“I’m challenged by how I’m going to make it funny,” said Njambi.

As I said at the start, I believe that the best comedies are often about tragic situations – and you can do that without diminishing the horror of the situations. The most important thing is a meaningful story and people the audience cares about.