So Ellis introduced me to his girlfriend Charlotte ‘Charlie’ Dinkin.

Ellis won a Malcolm Hardee Comedy Award last year for deciding to get repeatedly punched in the face by his stage partner Rose to publicise their Edinburgh Fringe shows. He still seems surprised by the fact people remember this. Charlie is not surprised.

Charlie finished an MA at Goldsmith’s College, part of the University of London, last August.

“What on earth is Visual Anthropology?”

“Documentary film making,” replied Charlie, “but with a research priority to it.”

“What on earth is a research priority?” I asked.

“That’s not an official phrase; that’s just me struggling for words,” explained Charlie. “In a standard documentary, maybe you’d go in with a sense of the narrative you’re trying to create and you find people who fit that story. But, in an anthropological documentary, you find the person and see what story emerges from it. Which is what everyone should be doing in all documentaries, really.”

Charlie did her BA course in anthropology at Barnard College, which is affiliated with Columbia University in New York. It is for women only.

“That sounds terribly un-PC,” I said. “I can’t believe they’re allowed to have a women-only university college in right-on New York.”

“Someone did come into Barnard as a woman and then become a man,” said Charlie, “and then wasn’t allowed to graduate because you have to be a woman to graduate. That was before I got there. I think they had to transfer to Columbia and graduated from there. Barnard’s a bastion of  old-fashioned values. But it was great, actually. Super fun.”

She then did the six months Comedy Studies program in stand-up, writing and improvisation at Second City in Chicago – which British universities do not recognise as an academic subject.

Then an MA in Visual Anthropology at Goldsmiths College in London, which she finished in August last year.

“I did a film about how much I love Woody Allen,” Charlie told me. “Well, I like Manhattan and Annie Hall and I’m not mad about the rest, to be honest. And a ten-minute one about Rory & Tim, a now defunct comedy sketch duo. It’s on YouTube.

“And I made Celebrity Paul… another 10-minute film. I edited that while I was doing two separate shows at the Edinburgh Fringe last August.”

She was in the improvised parody show Upstairs Downton and a kids’ show The Takeaway Story Show. She is now half of double act Glove Box (with Amy Hydes), an improvisation group Music Box and an improvised puppet show group Glitch.

“And Celebrity Paul is…” I said.

“…about a man called Celebrity Paul – self-named,” replied Charlie. “He is based in Retford in Nottinghamshire and he is a local celebrity. He has worked as an extra in a few films including Martin Scorsese’s Hugo.”

“Well, he would say he was a French businessman,” said Charlie, “but maybe that’s a character he made up for himself. He was a businessman-esque extra.”

At this point, Ellis interrupted:

“Before he became a self-made local celebrity in Retford, Celebrity Paul squatted in the gardeners’ hut in the middle of Soho Square – the mock-Tudor thing – and he lived there for quite a while, maybe a year or two. Like Marty Feldman.” 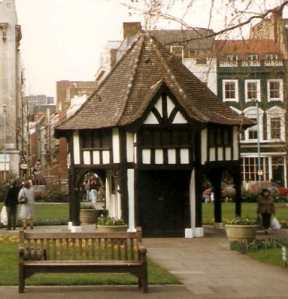 The comedian Marty Feldman lived in this gardeners’ shed?

“Marty Feldman lived in the mock-Tudor gardeners’ shed in the middle of Soho Square?” I asked.

“Is Celebrity Paul a sad wannabe?” I asked.

“No, I don’t think so,” said Charlie. “He has decided that fame is a worthy thing to pursue and he is pursuing it. I don’t know how successful that is, but fair play to him. He’s stuck in Retford.”

“Do local people believe he’s a celebrity?” I asked.

“The interesting thing about him,” said Charlie, “is that he HAS quite successfully become a local celebrity through force of will. I think it’s a good lesson for us all about how fragile image is and how you can convince people around you of anything. He believes and behaves as if he is a celebrity, so people treat him as a celebrity.”

Ellis interrupted: “He has a special pen that he wears round his neck to sign autographs with.”

“I think,” said Charlie, “that he does various jobs as is necessary. He doesn’t necessarily like to talk about it that much. He’s been a driver in the past and various other bits and bobs and – of course – he sells his autographs and appears at events.”

“Of course,” I said. “How much for a Celebrity Paul autograph?”

“I definitely wasn’t taking the piss out of him at all,” said Charlie. “It was an academic exercise and I never overlaid a story onto it. It’s absolutely all his own words and I think he comes out of it relatively well, He loved the film. I really wanted him to like it and he did like it; he showed it to his friends. He Tweeted it.”

“Only to the extent that it’s life,” said Charlie. “Everyone has their struggle. I don’t want to make a commissioned documentary about how brilliant things are. Justin Bieber had a film made about himself and Katy Perry had a film made and they’re just so engineered. Why would you not be more interested in normal people and in real life? In the end, movies are mostly trying to capture a ‘slice of real life’ but they’re Hollywoodised. Why not watch the real thing?”

“That’s the way I look at a lot of character comedy,” I said.

“Also,” Charlie continued, “when people actually become a success, I slightly suspect their life becomes about that. They have to be doing one thing all the time to be good at it and then they’re not really that interesting because they’re only about one thing. Better to look at more complex characters. I’m more interested in ‘real’ people, but I don’t know if any TV company is going to be interested.”

“Well,” I said, “TV reality shows are just a new formatted version of TV documentaries and Britain’s Got Talent is only a spin on old-style variety shows.”

“Except a TV variety show in the past,” said Charlie, “would have had people showing their talents but now part of the fun of the first rounds of those talent shows is seeing people who are terrible and laughing at them and…”

Ellis interrupting Charlie downstairs at The Toucan in Soho

“In the 1970s,” Ellis interrupted, “what you saw was just the act. You never saw them as themselves. You would never have a clue their life was awful and they’d get through on merit based on their act. Now their back story is worth more than their performance.”

“The shows are edited,” said Charlie, “to make you laugh at them but, at the same time, there’s something deeply charming and lovely about a person who just loves something enough they’re prepared to get up and do it even if they’re maybe not that good at it.”

“Have you pitched the Celebrity Paul film to TV stations as the basis of a series?” I asked.

“I had a stab” said Charlie, “at pitching it as part of a series about people who wanted to achieve fame and maybe haven’t quite got there yet or who have found their own version of it. The feedback I got was that these sort of people hadn’t done enough stuff to be interesting. But what Celebrity Paul HAS done IS the interesting part: what he has made of himself.”

Charlie’s 10 minute film on Celebrity Paul is on YouTube.