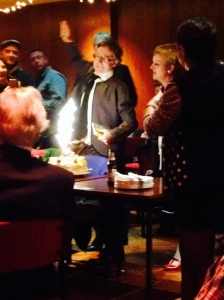 Today is David’s 50th birthday. Last night, he had a party in Peckham.

I ended up sitting at a table with London-based American comic Lewis Schaffer.

“How are your flaps?” I asked him.

The last time we met, he was telling me he has sleep apnea and has old-man flappy-flop flaps inside him.

“I’ve been using a mouthpiece,” said Lewis Schaffer. “If you want to see something inherently funny, it’s a 57-year-old man wearing a plastic mouthpiece in bed so he can sleep. It keeps my mouth open.”

“You don’t need an artificial aid,” I told him.

By this time, London-based American comedy force of nature Karen O Novak and her husband Darren had turned up.

And, by this time, the music was very loud.

I could not hear across the table.

I handed Lewis Schaffer my iPhone.

“Just talk to each other,” I told Lewis Schaffer. “I won’t hear what you talk about until tomorrow morning, but it will give me a blog. Keep up the American act.”

Lewis Schaffer took the iPhone. This morning, I transcribed what they said. 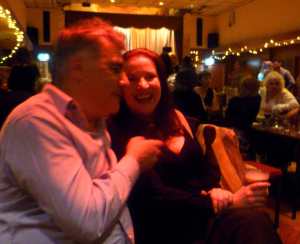 KAREN: I’m one of the few people here who actually knows for a fact that Lewis Schaffer is not a caricature of a New York neurotic Jew. I actually fucking knew you in New York when you were just…

We just called you ‘The Neurotic Jew’ at that point.

LEWIS SCHAFFER: Was I mental even for New York, do you think?

KAREN: I think we’re all characters in the great big…

LEWIS SCHAFFER: No, Karen. You were a memorable person even then. You were over the top. And you weren’t even a Jew. You were like a fake Jew.

LEWIS SCHAFFER: You gotta come up with a better joke than that.

KAREN: I’m Jew by injection. I kept my first husband’s Jewness. I got it in the divorce.

LEWIS SCHAFFER: What town did you grow up in?

LEWIS SCHAFFER: Where’s that near?

KAREN: It’s near a lot of Jews. Stephen Sondheim lives there. 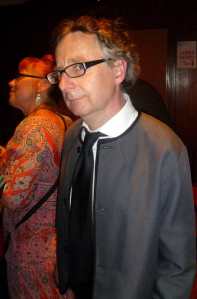 David Don’t in Beatles’ suit, behind an unknown woman, outside Ladies toilet

LEWIS SCHAFFER: Were you like me? People think my family had money when I was growing up, but we never had money.

KAREN: We had money.

LEWIS SCHAFFER: Did you inherit any of it?

KAREN: They’re not dead yet.

LEWIS SCHAFFER: I think your husband Darren loves you even without the money.

KAREN: He would have to.

LEWIS SCHAFFER: Yeah, he would have to, cos you’re very annoying. I say that as a misogynist and a woman-hater.

KAREN: You’re very good at both those things.

KAREN: You like the shape of them. The curvy squishiness…

LEWIS SCHAFFER: Even that can get on your nerves.

KAREN: … not so much the brainy part.

LEWIS SCHAFFER: A lot of my friends are women. I actually respect women. You know that about me, Karen. 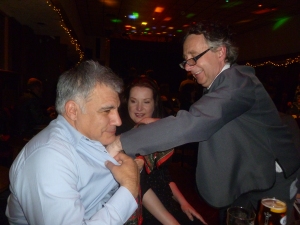 KAREN: I know that.

LEWIS SCHAFFER: That’s what people can’t believe. I actually spend a lot of time with women talking about how much I hate women.

KAREN: You spend a lot of time with women without your penis out. Probably the women insist on that.

LEWIS SCHAFFER: My penis doesn’t come out. It’s an ‘innie’. How long have you lived in Britain?

LEWIS SCHAFFER: Same as me: 13 years.

KAREN: I don’t have any English children, though.

LEWIS SCHAFFER: John says I’m not allowed to discuss why I’m here on a Saturday night. I was supposed to have the kids tonight, but the mother is punishing me for not loving her.

KAREN: If it was me, I would punish you FOR loving me. You are SO not worthy.

LEWIS SCHAFFER: That’s why you’ve kept Darren around for so long. That’s the key to keeping a man happy. I say to women: “When you make love to a man – right after he reaches orgasm – you should slap him in the face and say: Get off me, you disgusting pervert.”

KAREN: That IS what I do. 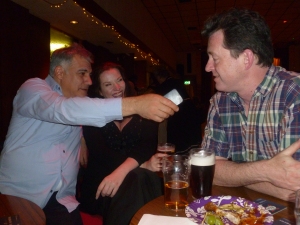 LEWIS SCHAFFER: (TO DARREN) Is that what she does?

DARREN: But I AM a disgusting pervert, so that’s fair enough.

LEWIS SCHAFFER: (TO KAREN) You probably think about going back to New York every day?

KAREN: Never. I like New York. I miss my friends there. But I don’t miss the city. The city itself is a shit hole.

LEWIS SCHAFFER: But you had a lovely apartment. It had a garden.

KAREN: We used to have some great parties in that flat.

LEWIS SCHAFFER: Did he make a good living: your first husband?

KAREN: Why on earth would I have a husband who didn’t make a decent living? I’m not an idiot.

LEWIS SCHAFFER: Are you calling my ex-wife an idiot? Is anyone who has sex with me an idiot?

LEWIS SCHAFFER: I think so too. I like this. We’re almost having a little relationship here.

KAREN: I think we could do a podcast.

LEWIS SCHAFFER: You were on my radio show.

KAREN: Yeah, but we didn’t get a good rapport going because there were too many other people there. And we weren’t nude.

KAREN: Are you a generous lover? That’s the key. When you make love to a woman, you have to give and give and give.

LEWIS SCHAFFER: I bring her an extra portion of fish. What does it mean to be generous?

KAREN: Exactly. You don’t even know what it means to be generous in bed. 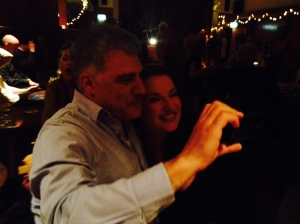 LEWIS SCHAFFER: I DO know what it means and I AM generous because, the more I give a woman, the less she has to pay attention to me, the less she’ll notice how I don’t care, how I’m unable to get an erection. How, even when I get an erection, it’s not noticeable.

LEWIS SCHAFFER: I got an ‘innie’.

KAREN: It’s more like a vagina, really, than a penis?

LEWIS SCHAFFER: Yeah. It’s like a penis, only smaller. Is your husband a generous lover?

KAREN: He’s very generous. He gives me his paycheck every month.

LEWIS SCHAFFER: (TO DARREN) How much do…

KAREN: (TO ME) You know what? John Fleming should write his own blog. He just talks to other people and then writes it down.

LEWIS SCHAFFER: That’s what he does. He’s gotten so lazy.

ME: Have you given me a good blog? Have you mentioned Lewis Schaffer’s flaps?

LEWIS SCHAFFER: I’ve got an ‘innie’.

LEWIS SCHAFFER: I’ve got an ‘innie’.