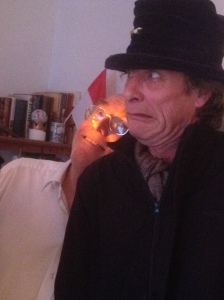 On Sunday, I asked occasional prop creator Martin Soan: “How many vaginas have you made for comedians at the Edinburgh Fringe?”

“Including a singing and dancing one.”

“Yes. Not my finest work, to be honest.”

My blog yesterday was about a visit to artist DRB’s exhibition at the Ben Oakley Gallery in Greenwich. I went with Martin and Vivienne Soan. They run Pull The Other One comedy club.

Vivienne told me about a now-deceased club called DeVille’s, based in the Royal Albert pub on New Cross Road, South East London. It used to feature such legendary odd acts as The Iceman.

Martin Soan at the Ben Oakley Gallery on Sunday.

“In 1982 or 1983,” she told me, “it was run by Martin, Steve Bowditch and Kelvin Vanbeeny. They used to wear white suits and, as people came in, they were given raffle tickets and, at the end of the show, they used to have this game called Don’t Be Fucking Greedy where they had a whole line of shots – whisky and so on – up at the back and people had to answer questions and the winners got a shot of whatever it was.”

“The shots,” explained Martin, “were whisky, tea and pee, all in optics, all looking like whisky.” 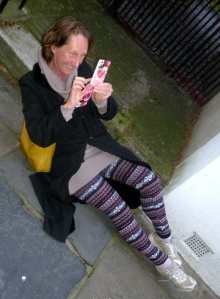 “At that time,” Vivienne continued, “we had just bought a video camera so, every week, people would win a prize – which might be Martin, Steve and Kelvin will do your ironing for a week or They’ll give you breakfast in bed for the weekend. And they used to film it and then, the next week, screen it at the club. It was great. They did all sorts of things. A day at the races; a day at the bowling alley.”

One of the other things they screened at the club was a video which Martin had previously made.

“I used to work with this genuine artist called Surrealist Ron,” said Martin. “So we got this tray measuring a yard by maybe two and a half feet and, in that, we made a picture of the classic Andy Warhol image of Marilyn Monroe. Then – it was almost like paint-by-numbers – we divided up with cardboard where each colour went. 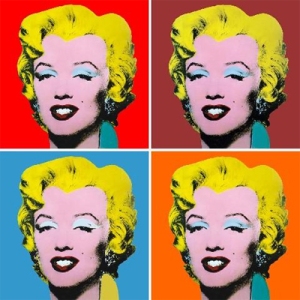 “Then we got a load of maggots and used food dye to colour them – yellow, blue, red, black, flesh tones and all the rest – and put the relevant colours into the different compartments. So we had this picture of Marilyn Monroe, but it was writhing around, because all the maggots were alive. Then we suspended a Sony Video 8 camera above it and removed all the cardboard dividers.

“So we had started off with this pretty crystal-clear image of Marilyn Monroe with the colours writhing and then, when we withdrew the cardboard dividers, as the maggots wriggled, it gradually went out of focus and diffused and the colours started mixing and it just ended up a writhing mess.”