Queue stretched along a tunnel while dead animals warmed up

Well, there is surreal and then there is pure gimmickry.

I am not sure which I saw last night.

Pull The Other One comedy club runner Vivienne Soan and I went to see a variety of dead animals sing and perform in The Vaults, which are in an extraordinary officially-graffiti-encouraged tunnel under Waterloo station in London.

The event was artist Charlie Tuesday Gates’ allegedly ‘private’ view and stage performance of exhibits at her Museum of Death.

A very, very large audience was hanging around and queuing outside the venue for about half an hour after the billed start time because, according to the security guy on the door “They’re warming up inside.”

This is not something you necessarily want to hear about performing dead animals.

According to the tease by Saatchi Art, who know a thing or two about ‘bigging-up’ Art: “Despite never describing herself as a taxidermist, Charlie Tuesday Gates was instrumental in bringing this previously dark art into the mainstream with her pioneering performance series, D.I.Y Taxidermy LIVE!”

Charlie Tuesday Gates is a vegan.

The come-on for the show went:

“Gates’ first solo show since retirement transports you into a fantasy underworld where beauty and death collide with nostalgia and borderline insanity… Controversial ‘animalation’ video pieces will also be screened and a special live performance of Gates’ Musical: ‘SING FOR YOUR LIFE!’ in which real animals are manipulated by hand to perform, sing and dance in a bizarre talent contest: a cross between X-Factor and Pet Rescue…. Where the recently deceased compete for the chance to live again.

“Her fashion brand ‘Mind Like Magpie’ provides the perfect complement to her sculptural work: wearable art that will be showcased alongside the exhibition… Pieces have been commissioned for Elton John, Beyoncé and even appeared on the holy head of Cara Delevingne.”

So there were the exhibits last night…

…and then there was the performance.

Basically Charlie Tuesday Gates sang while her hand was inside the heads of dead, skinned animals, moving them as if they were doing the singing… and a man manipulated the fore-legs of the dead foxes, badgers, dogs etc. He used sticks attached to the limbs. It was a bit like some Muppet musical staged during the Weimar Republic with disembowelled dead animals.

Someone in the audience told us: “You know, she normally gives live skinning demonstrations during her shows?” 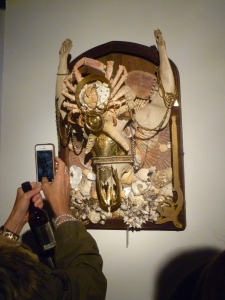 Is it Art or just a gimmick? People thought Art.

According to the publicity: “Working with audience participation, she skins and stuffs an animal using only the most basic ingredients: salt, sanitary towels and Shake n’ Vac.”

There has been talk of Charlie Tuesday Gates appearing at one of Vivienne & Martin Soan’s Pull The Other One shows at Nunhead, in London.

I said to Vivienne after the show, as we left through the graffiti-festooned tunnels under Waterloo station: “You should maybe put her on at Pull The Other One in Leipzig. It might remind them of Berlin in 1936. When is your next Leipzig show?”

“Have you any locals on the bill?” I asked.

“We have Felix & Jander, a couple of local artists in Leipzig. Jander is a mathematician and an artist. He is going to give a lecture to the audience on mathematics.”

“Is he a fine artist or a performance artist?” I asked.

This did not make things any clearer.

But, perhaps, I would not have it any other way.