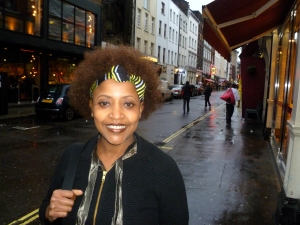 “I suppose a lot of new comics don’t realise you can talk about serious subjects,” Kenyan-born comedian Njambi McGrath told me last week.

When I blogged about her in February, Njambi told me she wanted to write a book about the British colonial period in Kenya – with her parents’ lives as a narrative thread – and, to encourage herself to do the hard work involved in researching it, she would write an Edinburgh Fringe comedy show – Bongolicious – on the same (decidedly non-comedic) subject.

“How is the book coming along?” I asked her last week.

“Hard work,” she told me. “And emotional. I’ve been phoning my mother, who’s back in Kenya, but she speaks with great difficulty because she’s got Parkinson’s Disease and she needs someone to translate to me what she’s saying.

“The British used to come to a village and collect people, make them dig their own graves and then shoot them.

“My grandmother was born at the time a lot of the Settlers moved in. I was reading about the traditions in the time when my grandmother was circumcised and the etiquette and the dances they had to do two or three months beforehand.

“The missionaries all came to East Africa to ‘save’ us. They all had spheres of influence. The ones local to my grandmother were Scottish. Presbyterians.

“What cultural practices were repugnant?” I asked.

“They way they dressed; their dancing; the way they used to cut their ears.”

“Sounds like a Saturday disco night in Glasgow,” I said.

“How strong is religion in Scotland?” Njambi asked me.

“Don’t even ask,” I said. “If you’re Catholic or Protestant in Glasgow, you’re in a lot of trouble, but being black gives you a Get Out of Jail card… So some of the stuff you’ve been researching for the book will be in the Edinburgh show?” 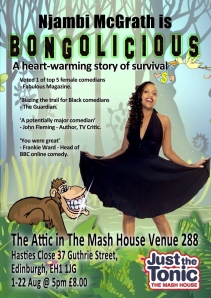 Njambi will be Bongolicious in Edinburgh

“I can’t put everything in, of course,” said Njambi, “and there are some things I am omitting because they are rather gruesome. For example, I won’t talk about shooting into the graves, because it’s already clear what’s happening.”

“And,” I said, if you have 55 minutes of brutality, it loses impact. You don’t want to cheapen the material with laughs, but it helps to pace the show.”

“It’s difficult,” said Njambi. “There are some areas where people can laugh – like about the Settlers, who were ridiculous. The stuff that is very deep I can’t joke about. Like the soldiers who used to come in at night and ask the women if they wanted their children to be raped or killed… I’m working like crazy to find a few more punchlines.”

Njambi is performing a preview of Bongolicious at the Leicester Square Theatre tomorrow night and then at other venues. She tests parts of it every week at her comedy club – Heavenly Comedy – in Shepherd’s Bush.

“I want to test the reaction on real audiences,” she tells me. “I want it to end up like a rollercoaster.”

“What about the end?” I asked. “You sort-of need to have an ‘Up’ at the end, which is difficult to pull off without cheapening what’s gone before.“

“The end of the story is much more positive,” explained Njambi, “because it is about my parents and that’s a positive thing – two young people who get together and save enough money to buy a farm – They survived, despite all odds, when many people didn’t survive. Maybe around 300,000 people were killed. Some are in mass graves. Some are in a museum… In a museum!”

“Your mother must be very proud,” I said.

“She is just happy to be heard,” Njambi told me. “My mother is 67; she struggles massively to talk. All these things happened and there was no acknowledgement. Life moved on as if nothing had happened. The reason it has made me so emotional is I grew up without knowing anything about it. My parents, either consciously or unconsciously, didn’t mention any of it.