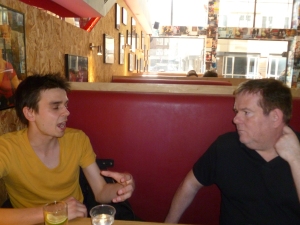 Yesterday, because of a recent blog-jam, I posted the second part of a chat I had with comedian John Ryan two weeks ago. We talked at the Soho Theatre in London and, straight after him, I chatted with comic Joz Norris.

In fact, they overlapped and John Ryan did part of my work for me.

“How long have you been doing comedy?” John Ryan asked Joz.

“I’ve only been doing it for about three years,” Joz told him. “Mainly things like Pull The Other One and Weirdos and ACMS and Lost Cabaret – the more alt nights – I think ‘alternative’ is a weird word.

“I started off doing stand-up as myself but got bored with what I was saying cos I think I was copying other people I’d seen. So then, last year, I did characters just to try to force myself to do something I liked. And, since then, I’ve gone back to being me now I know what I want to perform. It’s more like actual stand-up this year, but trying to do it in a way that is more interesting for me at least.”

“Do you have a day job?” John Ryan asked.

“I work in a bakery,” Joz told him. “I’m a barista in a little artisan bakery. It’s just down the road from where I live and you get free bread. You get a lot of free coffee and you can just chat to people. I play games with the babies, because it’s mostly mums that come in. If babies work out there is a pattern, they start to really enjoy it. One baby dropped its spoon, I picked it up and gave it back to him and that was half an hour of fun: he just kept dropping it and I got £1 from the mum for entertaining the baby.”

After John Ryan left, I asked Joz, perhaps less interestingly: “Where were you born?”

“You don’t know which county you were brought up in?” I asked.

“I have no idea,” he said. “People always say Where are you from? and I don’t really feel tied to anywhere. But there is this little village of Petworth which is now all antique shops. Very sad. It used to be a proper little village. A Postman Pat type village. It had things like a butcher and a librarian. Now everything is an antique shop.”

“Is it near somewhere more interesting?” I asked.

“I don’t know,” said Joz. Then he thought. “Oh! Bigner. Bigner Park. I think there was something like a Roman dig there. That’s not antiques, though. That’s archaeological.”

“Why do all these antique buyers want to come to Petworth?” I asked.

“You went to university?”

“What did you study?”

“English Literature. I didn’t know what to do. Well, I knew I wanted to write, so I thought: Oh – I’ll study English. That’s writing.”

“So you studied Chaucer?” I asked.

“Never did Chaucer,” said Joz. “Studied Bulgakov. I did a lot on Bulgakov.” 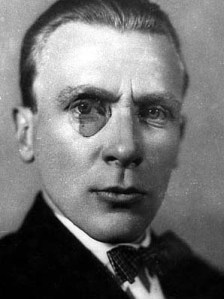 Mikhail Bulgakov – not known for his English

“Is he known for his English literature?” I asked.

“You’re right,” said Joz. “It was a bit of a left field choice. But I got to the third year in the course and you could do a dissertation on anything you wanted. I had read Bulgakov when I was 15 because I got into anything with creatures in it.”

“And,” I asked, “the UEA people never spotted Bulgakov did not write in English?”

Well,” replied Joz, “I said Can I do this? and they said they only had one expert on Russian in the entire teaching staff and she was on maternity leave. So they got me someone who knew a bit about German literature because they thought that was the closest to Russian and she shepherded me through it. But most of it, I was just teaching her stuff – Oh, this is another thing about Russia – Oh, cool, great. I didn’t know that – Mostly I could just write what I wanted. It was brilliant.”

“You can read Russian?” I asked.

“I did two years of Russian at school,” I said. “I’m shit at languages. I got confused between similar sounding words for a young girl, a country cottage and porridge.”

“Though,” said Joz, “there’s not many situations where they’re all gonna be used in the same context.”

“So,” I said, “having caused confusion in the UEA English Literature Department, you thought you would carry on in comedy?”

“I did acting and writing all through my teens,” explained Joz, “and thought I would be a serious writer. Then I met John Kearns when we were at UEA and he and another guy (John Brittain, last heard of in this blog co-writing Margaret Thatcher, Queen of Soho) ran a local comedy club and when I wrote a sitcom for the local student radio station they said: Come and do a spot at the club.”

“So now you’ve been performing comedy for three years.”

“I think when you start out, you think Who do I like? I’ll do sort-of what they do. I grew up watching sitcoms a lot: Alan Partridge and Marion and Geoff and Peep Show. Lots of comic actors. For a while I was trying to do things I’d see people I’d admired do, then realised I was doing that and found it a bit boring and thought doing a character that was not me would be a route to doing whatever I wanted.”

“Last year,” I said, “you did a character show at the Free Festival in Edinburgh called Joz Norris Has Gone Missing…” (There is a promo on YouTube.)

“And I’m going up this year doing a pay show, which is a daunting thing – at the Underbelly.”

“Where did you get the money?”

“It’s not me. Live Nation – who usually do music – I think they promote Aerosmith at the moment – are branching out into comedy. I was kind of wary of it. There’s a weird leap you have to make in your head between getting people in off the street to see free comedy and suddenly saying Pay me £8 or £10 of your money just to come in.”

“And the show is called?”

“Awkward Prophet. (There is a promo on YouTube.) It’s mainly about relationships and girls and love. Obviously, that has been done a lot, but I’m doing it more from this attitude of being a weird, slightly alien asexual man-child thing who doesn’t get anything.

“I’ve always been disastrous in relationships by not understanding how they’re supposed to work so i thought If I can actually find a way to talk about it which I think is still optimistic and feels like I’m saying something I want to say, then…”

“Yes, I might start being successful. And also it feels like I’ve found a way of talking about myself on stage that is more naturally me and maybe different-ish for the audience.”

That was the conversation Joz and I had at the Soho Theatre a fortnight ago.

Last night, I asked him if there were any updates.

“I went to Tesco today,” he told me, “to buy a packet of McCoy crisps as a snack during the interval of a gig… When I got back to the venue, the MC put them on a plate and passed them round the audience. It was very disappointing.”

“I’ve been cast as the villain in a TV sitcom pilot called Film School written by Matt Silver which is filming a teaser later in June and it marks a break from the ‘naive idiot’ parts I usually play. This time I get to scowl and look threatening and shout abuse at the protagonists, which is a dream come true.

“Also, I’ve been cast as Bertie in a kids’ magic and puppetry show called Bertie & Boo about a brother and sister who learned magic from their grandparents and now they can make scarves change colour and the like. I think I got the part because of my colourful jacket, as I can’t actually do any magic… but they’ve told me we’ll cross that bridge when we come to it.”