In recent weeks, I have been posting extracts from my 2001 diary about the period when my father was dying from cancer.

I previously posted a shorter version of what follows in November 2011, when Apple boss Steve Jobs died. I think this one has a better ending. 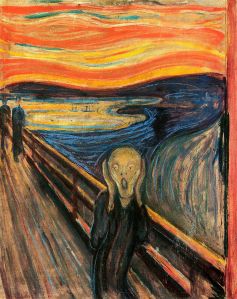 When we visited my father this afternoon, he was unable to communicate, staring blankly into the middle distance.

My father told the nurses he felt pain this morning. So he will now be given an extra daytime tablet with a morphine-element in addition to the one he is given in the evening. His eyes stared, as if at something faraway and long ago. As I left and put the trolley tray by his bed, he looked at me and said: “There’s something not at all right with me.”

I had a 2-hour medical check-up in a BUPA building near King’s Cross.

London was sweltering in extraordinarily hot weather, but inside the building it was cool and relaxing. Later, I sent an e-mail to my friend Lynn, saying:

They say I’m getting into the start of being dangerously overweight and VERY slightly too cholesterolly. I do wonder if it was really necessary for the short Chinese gent to put his finger up my bottom to test for Prostate Cancer. Surely there must be another way to do this or was he just ‘avin’ a larf?

I phoned my mother around 6.00pm and she told me that, when she had visited my father in the afternoon, there had been no response to anything she or my aunt (his sister) said. His eyes were open but staring ahead. “I think he was drugged up to the eyeballs,” she told me. “I don’t think he’s in any pain.” (Later, the matron told me the medication he was on was not that strong and that they had not given him a daytime tablet to avoid making him zombie-like.)

At around 8.30pm, I was mowing the grass on my front garden. The matron phoned me on my mobile phone to tell me my father had deteriorated very badly and I arranged to leave at 10.00pm, to get to the nursing home around 11.30pm, telling my mother I was getting to her home in Clacton at 1.00am and not to wait up for me. I was going to see how he was at 11.30pm and decide what to do.

The matron rang back at 9.30pm to tell me the doctor had just been and said my father only had four to five hours left before he died, so I went immediately, told my mother I had been phoned by the matron and asked if she wanted to go to the home to see my father.

She said (quite rightly) No, with a sad, tired, tone to her voice, and I phoned her just after 11.05pm when I had gone in and seen my father briefly. I suggested my mother take her two nightly sleeping tablets and go to bed and I would stay with my father all night and phone her at 7.00pm when she got up. She knew it was terminal because she had told me where the undertaker was. There was some surprise in her voice when I phoned her:

“Is he still here?” she asked.

When I arrived, the nursing home’s night sister warned me he had deteriorated a lot since my mother had seen him this afternoon and warned me “his eyes are open”.

The first thing that shocked me when the door was opened, though, was the sound. I had never realised the phrase “death rattle” was anything more than a colourful phrase. It is an exact description. I had also thought it was a brief final sound rather than an ongoing sound.

It was a rhythmic, rasping sound.

His face was side-lit in the darkened room by a yellow-cream glow from a bedside table lamp sitting not on a table but on the floor of the room with old-fashioned floral wallpaper. It was bit like a Hammer horror movie of the late 1950s in slightly faded Technicolor.

His bed was behind the door and when I saw him lying there on his back in bed I was shocked again because his face was like Edvard Munch’s painting The Scream.

His false teeth were out, so his mouth was abnormally small considering it was open to its fullest extent, the skin between his upper lip and nose seemed wider than normal; and there was an indented line on his nose between his nostrils which, in profile, made him look like he had two noses.

He was lying on his back staring straight up at the ceiling with wide open, unblinking eyes as if he was shocked by something he saw on the ceiling. His head was tilted back slightly from his torso as if his head had been dropped into the soft pillow from a great height.

This tilted-back head, the shocked eyes, the open mouth all combined to make it look like he was frozen in a silent scream yet the sound coming out was a death rattle from his throat, as the air mattress beneath him made discreet little isolated cracking sounds presumably caused by the slight movements as his body made the rattling rasping breathing and his distended stomach rose and fell under the bedclothes.

The rattle was like a machine breathing through a very slightly echoey plastic tube partially blocked by air bubbles in water. I wondered if he was dead already, inside. It was as if his brain or heart must be telling his throat and chest to desperately gasp for air even though they knew it was pointless.

Towards the very end, the rattle slowly died out and human light breathing returned, getting gentler and gentler as his life ebbed away. When the breathing ended, I pressed the buzzer for the night sister.

When she arrived, there was some slight breathing again, but only for 40 or 60 seconds. For perhaps the last 15 seconds of his life, his mouth – until now rigidly open – partially closed then reopened three times, then his eyes slowly closed, his mouth partially closed and reopened twice more and he was dead, his eyes closed and mouth open. It was 00.35am and 22 seconds on Wednesday morning. I had arrived at about 11.03pm.

After he died, I went downstairs to the nursing home office with the night sister, whose father-in-law had died in the same room – Room 11 – of the same disease. I then went back up to the room where my father lay for 15 or 20 seconds during which time there were a couple of tiny surreal flashes through the window from the outside world.

When I went outside to my car, the black sky was flashing white with lightning. Every few seconds, the whole night-time sky was silently flashing white with increasing – but still silent – violence. On the drive back to my parents’ bungalow in Great Clacton, the flashes became whiter and more frequent and the thunder sound arrived. On the drive beside their front garden, small surreal white specks were being blown across the tarmac. When I got out of the car at my parents’ – now my mother’s – house, there was a neon-like flash of vertical lightning and a sound of rustling which continued for 60 or 90 seconds.

I took my bags inside the bungalow and then the rain started. Torrential rain thundering on the streets and windows and roof. Violent and angry rain.

It all struck me as unfathomably dramatic. My father’s death… then immediately the heavens in turmoil… then strong winds… then thunder crashes and angry, violent rain… As if the heavens, in turmoil, were protesting.

It reminded me of the death of Julius Caesar in Shakespeare’s play.

I looked up the quote later:

There is one within,
Besides the things that we have heard and seen,
Recounts most horrid sights seen by the watch.
A lioness hath whelped in the streets;
And graves have yawn’d, and yielded up their dead;
Fierce fiery warriors fought upon the clouds,
In ranks and squadrons and right form of war,
Which drizzled blood upon the Capitol;
The noise of battle hurtled in the air,
Horses did neigh, and dying men did groan,
And ghosts did shriek and squeal about the streets.
When beggars die, there are no comets seen;
The heavens themselves blaze forth the death of princes.

My father was a very ordinary man. Yet it was like the heavens were protesting.

In the morning, my father’s dead body lay on an occasionally cracking air bed in Room 11 of the nursing home.

People were talking about the dramatic overnight storm. The telephone lines had been cut at Weeley Crematorium but the fax line was working, so the funeral director could only talk to the crematorium by fax.

The curate who will lead the service at my father’s funeral came round to chat to my mother.

“What was Harry like as a person?” he asked my mother.

“He was very placid,” she told him. “But if he was riled he would go through a brick wall. It would take an awful lot to get him riled, though.”

Almost immediately – within 15 seconds – the phone rang. It was her cousin Sybil ringing from Edinburgh to say she and husband Osmond (who is dying of cancer) would be coming down to the funeral.

My mother partially broke down again in the evening.

“I’ve been worrying about this all day,” she cried to me. “When I said yesterday I had no family……. I’ve got you……. That was a terrible thing to say!”

Of course, when she had said there would be no members of her family at my father’s funeral, I had taken it the way she had meant it.

Her parents were dead. She was an only child. Almost.

Her parents had adored her brother. He was the perfect son.

My mother was born with no left hand – only a rounded stump. When she was a small girl, her mother told her: “Keep your left hand in your pocket. Don’t let anyone see.” She always hid her left hand from strangers.

Once, in the 1930s, she saw a man in a Glasgow street – she still remembers him clearly – leaning on the wall by an office doorway and she saw he “had exactly the same as me”. But he didn’t care if people saw it; he just behaved as if it was natural. “I wanted to talk to him but I didn’t,” she told me. “I wish I had.”

Before my mother married my father, my aunt (my father’s sister) told her: “I wish Henry could marry a whole woman.”