Everything happens by happenstance… My mother re-meets my undead father

The long-nosed stranger of Strasburg in The Life and Opinions of Tristram Shandy, Gentleman

Today’s blog is about how my mother met my father.

I have not read Laurence Sterne’s book The Life and Opinions of Tristram Shandy, Gentleman, which was published 1759-1767. As I understand it, the book is supposed to be the autobiography of Tristram Shandy and it starts off with his birth but – in order to explain why that happened – he has to explain about his parents and the background to his birth to such an extent that, after nine volumes, he is way back before his birth and has never started his autobiography. That is what my English master told me at school.

The reason I cannot read Tristram Shandy is because, in 1991, I was hit by a truck while I was standing on a pavement and now I can write books on computer screens, but I cannot read books.

It would take too long to explain.

I was hit by a truck because, one Saturday in Borehamwood, Hertfordshire, I was rushing to post a birthday card to someone I knew in Norwich, Norfolk. She was not a friend, just an acquaintance of an acquaintance whom I had met by accident a few years before.

My mother and my father went to the same school together in Whithorn, Wigtownshire, Scotland, but they had not really known each other then. They were in different classes. My mother lived in the small village of Garlieston. My father lived in the Isle of Whithorn (which, confusingly, is a totally different place to Whithorn).

During the Second World War, my father was home on leave from the Royal Navy. He took a wrong bus and was walking down the main street in Whithorn. My mother was in the street with a friend who had gone into a jeweller’s shop. My mother looked up the street and was surprised to see my father walking towards her.

She was surprised because she had heard he had been killed.

“I thought you were dead,” she told him.

They got into a conversation.

A few weeks later my father, his sister and some other people went from the Isle of Whithorn to my mother’s village of Garlieston for a dance.

My mother’s family dog disappeared and she went off looking for it with my father.

The dog (a Jack Russell called Vick) eventually turned out to be asleep under the sink in the kitchen. 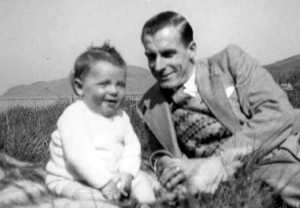 Me (aged 1) and my father near home in Campbeltown, Argyll